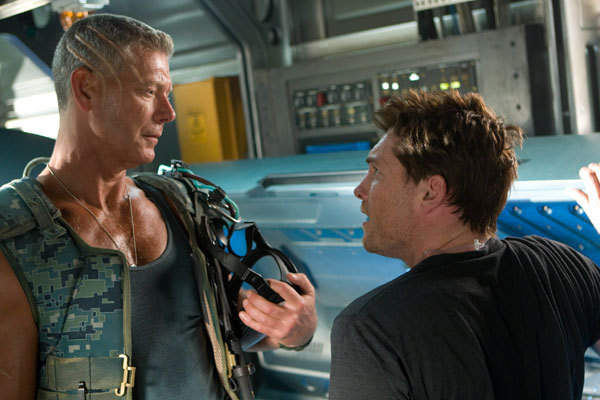 What's the Next Billion Dollar Movie?
August 10, 2011 20:24 PDT - By Ray Subers - Box Office News
Prior to Avatar's release in December 2009, only four movies had ever made over $1 billion worldwide. Since then, that number has grown to ten, with Pirates of the Caribbean: On Stranger Tides, Transformers: Dark of the Moon and Harry Potter and the Deathly Hallows Part 2 all reaching the coveted milestone in the past three months alone. Each of Summer 2011's billionaires are sequels that showed massive gains on their predecessors in foreign markets, thanks in part to current exchange rates and 3D premiums (the format has yet to experience much of a backlash overseas).

Among the upcoming releases, there are plenty of 3D movies that are poised to at least flirt with $1 billion, though none have the pedigree that Summer 2011's winners had. In fact, the safe bet is that the next $1 billion movie isn't even in 3D (hint: it involves a brooding superhero). Here's a look at the upcoming movies that have the best chance of joining the $1 billion club, along with some movies that aren't likely to make the cut:

The Adventures of Tintin (Dec. 23): While Tintin is basically an unknown quantity domestically, it's an immensely popular brand overseas, particularly in Europe. It's unclear whether it will play in Asia, though, which is critical for any $1 billion contender, and it also may be a stretch for it to make $200 million in the U.S. No matter how big Tintin is in Europe, it's unlikely to make $800 million overseas, likely putting a $1 billion worldwide sum out of its reach. Still, it's worth keeping an eye on.

The Avengers (May 4, 2012): Iron Man 2 is currently the top-grossing Avengers movie worldwide with around $624 million, which is a far cry from $1 billion. Still, all five Avengers movies have combined for around $2.2 billion so far, and those have essentially served as advertisements for The Avengers' much-hyped superhero meet-up. The movie is also incredibly well-positioned at the beginning of a weak May and should at the very least crush Iron Man 2's total.

The Amazing Spider-Man (July 3, 2012): Spider-Man 3 made $890.9 million worldwide, and the addition of 3D for the next entry in the franchise would under most circumstances guarantee $1 billion. However, The Amazing Spider-Man is a reboot that appears to cover essentially the same ground as the first Spider-Man, just with a new set of faces, which makes it a bit of a wild card. As far as recent reboots go, X-Men: First Class finished below its immediate predecessors, while Batman Begins significantly outgrossed Batman and Robin. The Amazing Spider-Man could reach $1 billion, but it's going to take a strong marketing effort from Sony Pictures International, which has never had a $1 billion movie before.

Ice Age: Continental Drift (July 13, 2012): As hard as this may be to believe, Ice Age: Dawn of the Dinosaurs is the highest-grossing animated movie ever at the foreign box office with $690.1 million. That was a 50 percent increase over Ice Age: The Meltdown, which had improved a massive 122 percent over the original Ice Age. If Continental Drift gains a comparatively meager 20 percent, it will earn nearly $830 million overseas. The last two Ice Age movies each made around $195 million domestically. Even if Continental Drift falls off a bit domestically, it should still come close to $1 billion worldwide.

The Dark Knight Rises (July 20, 2012): The Dark Knight was the last non-3D movie to reach $1 billion, and it took over six months to inch past that point. Without Heath Ledger as the Joker and with a less-enticing marketing campaign so far, it's unlikely that The Dark Knight Rises matches The Dark Knight's outstanding $533.1 million domestic total. However, it should top The Dark Knight's $468.8 million foreign total, considering that superhero sequels almost always improve on their predecessors' grosses. An important indicator is the performance of director Christopher Nolan's Inception, which at least partly leveraged good will from his Batman movies to earn a massive $533 million overseas. There's an off-chance The Dark Knight Rises falls short of $1 billion, but the odds currently appear overwhelmingly in its favor.

The Hobbit: An Unexpected Journey (Dec. 14, 2012): The Lord of the Rings trilogy made over $2.9 billion worldwide, with Return of the King capping off the series with an incredible $1.12 billion in 2003. Nine years later, audiences will finally see The Hobbit on the big-screen. It probably won't be as well-attended as Return of the King, though it doesn't need to be to reach $1 billion, thanks to its 3D premiums and nine years of ticket-price inflation.

Monsters University (June 21, 2013): Monsters, Inc. earned over $525 million worldwide back in 2001, which remains in the top half of Pixar movies. The 12-year gap between the two Monsters movies is a year longer than the gap between Toy Story 2 and Toy Story 3, and Toy Story 3 saw a 119 percent jump to $1.06 billion. Monsters isn't as strong a brand as Toy Story, but it also only needs a 90 percent bump to get to $1 billion.

The Hobbit: There and Back Again (Dec. 13, 2013): If The Hobbit: An Unexpected Journey is well-received, the sequel will make $1 billion as well.

There are also a handful of high-profile upcoming movies that are set for strong worldwide grosses, though they have little chance of making it to $1 billion. Puss in Boots (Nov. 4) features the popular feline character from Shrek 2, Shrek the Third and Shrek Forever After, each of which made over $750 million worldwide. The series has been on the decline since Shrek 2, though, and this feels more like a lesser spinoff than a $1 billion movie.

The Twilight Saga: Breaking Dawn Part 1 (Nov. 18) is, of course, hotly anticipated, but Eclipse actually saw a decline in foreign attendance from New Moon, which topped out at $709.8 million worldwide. It just doesn't seem like the audience has shown enough growth for Breaking Dawn Part 1 to hit $1 billion, though that could change by the time Part 2 hits theaters in November 2012.

The first Sherlock Holmes made $524 million worldwide, and that was going up against Avatar. With good will from the first movie and the introduction of Holmes' main nemesis Moriarty, Sherlock Holmes: A Game of Shadows (Dec. 16), will certainly gross more, but doubling the first movie is a near impossibility.

Man of Steel (June 14, 2013) brings Superman back to the big screen, though his previous outing only earned $391 million worldwide. This one should get a boost from its Dark Knight-like reboot, but $1 billion is probably way out of reach.

Finally, Despicable Me 2 (July 3, 2013) will also attempt to build on its predecessors' $543.1 million, though improving to $1 billion just three years later would be surprising.

What do you think will be the next Billion Dollar Movie? Discuss on Facebook, Twitter, and in Box Office Mojo's forums.