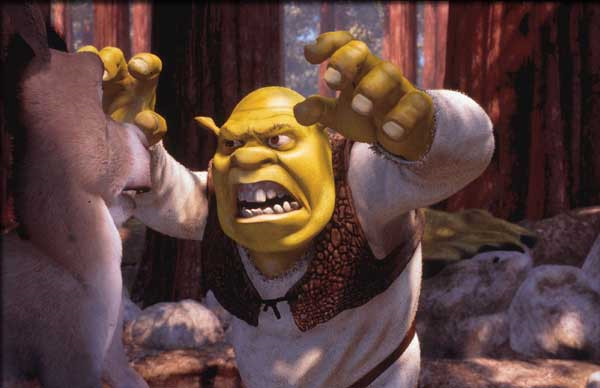 Weekend Briefing: 'Shrek' Shoots for Happily Ever After
May 21, 2010 10:09 PDT - By Brandon Gray - Box Office News
This weekend, the fourth and presumably final Shrek lumbers into 4,359 theaters, surpassing Shrek 2 as the broadest release ever for an animated movie. Included in that sum are 2,373 3D sites, topping Alice in Wonderland (2010) as the biggest release yet for the format. Also opening is Saturday Night Live-based action comedy MacGruber at 2,551 theaters.

Shrek is one of the few franchises to gross over $1 billion, and it did it with only three movies. Shrek Forever After follows the series' pattern of opening on the weekend before Memorial Day and arriving three years after the last movie. Whether it continues the series' tradition of breaking the animation opening weekend record with each release is another matter, but it will have an uphill battle following audiences' mixed reaction to Shrek the Third and Box Office Mojo reader polling that indicates far less interest than Shrek the Third had. In the "When will you see it?" polling, Shrek Forever After has landed closer to Kung Fu Panda and other lower-grossing-but-still-popular titles.

The first Shrek kicked off the franchise with a tremendous $42.3 million on its first weekend in 2001, or the equivalent of nearly $60 million adjusted for ticket price inflation. It went on to gross $267.7 million (or over $375 million adjusted).

Good will from the first movie plus the shrewd addition of Puss in Boots took Shrek 2 to the next level in 2004: it raked in $108 million its first weekend (over $138 million adjusted), despite opening on a Wednesday, and went on to become the highest-grossing animated movie of all time with over $440 million (around $565 million adjusted).

The party cooled with Shrek the Third in 2007, but it would have been unrealistic for it to maintain the franchise's pace, even if it was deemed up-to-snuff in terms of quality. It debuted to $121.6 million (over $140 million adjusted) and burnt out quickly, closing with $322.7 million (around $373 million adjusted).

The marketing has been calling the latest Shrek movie "Shrek: The Final Chapter," but the official title remains Shrek Forever After. It's a more aggressive stunt than was pulled for DreamWorks Animation's previous release, How to Train Your Dragon, which marketing redubbed "DreamWorks' Dragons." The purpose is to emphasize that this is the last hurrah for Shrek in order to gin up extra interest, but it presumes that the specifics don't matter and that all people need to know is that it's another Shrek movie. This tactic has also led to confusion among potential moviegoers about what the movie is called, and such confusion is never a good thing in marketing.

In the new movie, Shrek contends with Rumpelstiltskin, who weaves an alternate version of Shrek's world. What it boils down to in the advertising, though, is a franchise resting on its laurels: it comes off as just another riffing on the characters with low dramatic stakes and not something that will excite the base. Given the sheer difficulty of maintaining a blockbuster audience, though, if Shrek Forever After makes less than Shrek the Third, it shouldn't necessarily be considered a disappointment. That would just be the natural course. But if it makes much less, then "disappointment" can properly be bandied about, particularly in light of the movie's supposed boost from 3D.

Counter-programming Shrek, MacGruber has the challenge of being more than a one-joke pony, which is what its pre-taped interstitials on Saturday Night Live are. However, it does have some momentum from being featured on the highly-rated Betty White episode earlier this month. More importantly, bumbling action comedies have been consistently popular with audiences, and MacGruber's advertising has ran with this angle, leading to a decent 13 percent opening weekend score in Box Office Mojo's polling. May has been fairly fertile ground for the genre in the past, featuring such goofy titles as Undercover Brother, Spy Hard and, especially, Austin Powers: International Man of Mystery. Those movies weren't smashes, but Austin Powers laid the foundation for a blockbuster franchise.

MacGruber's ads have trumpeted two different movies via anonymous critics' quotes. One statement was plausible: "the best SNL movie since Wayne's World." The other, though, was suspect: "the best action comedy since Beverly Hills Cop." MacGruber is actually the first SNL movie since The Ladies Man in 2000, and the franchise has a checkered past commercially. Only two SNL movies have struck a chord with audiences: Wayne's World in 1992 and The Blues Brothers in 1980.

Similar Movies to:• 'Shrek Forever After'