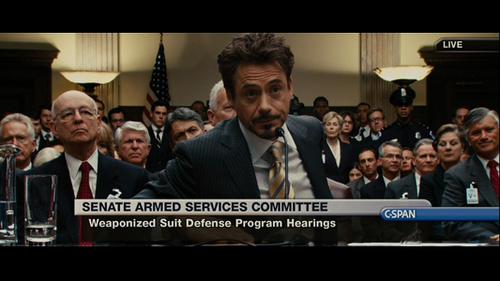 By comparison, the first Iron Man fell 48 percent to $51.2 million in its second weekend (or the equivalent of nearly $57 million adjusted for ticket price inflation). Iron Man 2, though, held better than Spider-Man 3 (down 62 percent) and X-Men Origins: Wolverine (down 69 percent) among past early May Marvel movies. The sequel stormed past the $200 million mark in ten days, and, with $211.2 million in the till, it's already the tenth highest-grossing comic book adaptation ever and ranks second for 2010, swooping past How to Train Your Dragon.

Director Ridley Scott and actor Russell Crowe's first Gladiator-like collaboration in ten years packed a wallop in its debut, showing how Gladiator still resonates. Marketed as if it were Gladiator 2 albeit with less verve, Robin Hood showed nary a quiver with $36.1 million on approximately 5,700 screens at 3,503 locations. That was more than Gladiator's $34.8 million, but much less in terms of attendance: adjusted for ticket price inflation, Gladiator's opening would equal over $51 million today. With Robin Hood's battles for freedom, the advertising also recalled Braveheart, which, though not a blockbuster, was a long-lasting audience favorite.

Medieval-themed pictures typically disappoint at the box office, as Mr. Scott found with Kingdom of Heaven in May 2005, but Robin Hood mustered the top-grossing start of all time for the sub-genre, surpassing the last dramatic Robin Hood movie, Robin Hood: Prince of Thieves. Prince of Thieves' $25.6 million opening, though, is the equivalent of over $48 million adjusted.

The Robin Hood legend clearly endures despite the myriad previous incarnations. Robin Hood attempted a gritty origin story, instead of doing a swashbuckler more in the vein of The Adventures of Robin Hood (1938) or even the recent Pirates of the Caribbean movies (sans the supernatural mumbo jumbo). Another recent Medieval movie, King Arthur, tried a new spin on a famous story, but was a bust, grossing $51.9 million in its entire run.

Robin Hood distributor Universal Pictures' exit polling indicated that 56 percent of the audience was male, and 63 percent was age 30 years and older. Moviegoers polled by CinemaScore gave the picture a "B-," which does not bode well for word-of-mouth: the service's grades are generally inflated, in part due to the polling being conducted on opening night when moviegoers may be in a more forgiving mood.

Two romances, Letters to Juliet and Just Wright, counter-programmed Iron Man 2 and Robin Hood to mixed results. Letters drew $13.5 million on close to 3,600 screens at 2,968 venues, which was less than lead actress Amanda Seyfried's last letter-themed romance, Dear John, made on its first day alone. With the exception of Dear John, Letters's opening was in the solid mid-range of its genre. Distributor Summit Entertainment's research showed that 81 percent of the audience was female, and 63 percent was 25 years and older

Just Wright landed with $8.3 million on around 2,100 screens at 1,831 sites, which was below par compared to similar movies. Star Queen Latifah's last romantic vehicle, Last Holiday, had a much bigger start, and Love & Basketball had significantly greater attendance.

Despite Iron Man 2's mass and Robin Hood's sizable start, overall business wasn't terribly exciting, coming in at less than $140 million. That was down from last year and attendance was lower than the last time this weekend fell on May 14-16, 2004, when Troy debuted.

• This Weekend in Box Office History