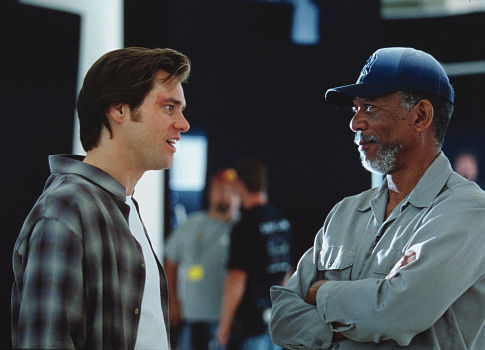 'Bruce' Blesses Memorial Weekend with $85.7 Million
May 27, 2003 0:53 PDT - By Brandon Gray - Box Office News
HOLLYWOOD (Box Office Mojo)—Comedy is king, but over the long Memorial Day weekend it was promoted to God, thanks to the massive debut of Bruce Almighty.

The litany of milestones doesn't stop there. The $81 million Universal release stands as the highest debut ever for a non-sequel or for a movie not based on popular source material and is tops for an unmitigated star vehicle. Among comedies, it's second only to Austin Powers in Goldmember's $73,071,188. Overall, it ranks eleventh on the all time chart.

Prior to the weekend, most industry and media pundits had pegged The Matrix Reloaded to top the chart for the second weekend in a row, making such puns as "pray for Bruce." But the mighty Matrix tumbled 60% as its rabid fanbase mostly saw it the first week, while Bruce exceeded all expectations, including industry tracking that suggested an opening in the $50 million range for the four days.

"Even our wildest expectation wouldn't have been this high," Universal's head of distribution Nikki Rocco told Box Office Mojo. "We had a hard time finding something to compare it to. There's never been a big comedy like this opening on Memorial Day weekend. It's usually action sequels."

"The tracking was excellent," Rocco said, adding that the studio thought Bruce would be in the $60 million range at most for the four days. "You can tell if people want to see a picture by the tracking. But in all my years in the biz, I've found you can't come up with an exact number based on it."

Demographically, moviegoers were evenly split between those over and under the age of 25, demonstrating broad-based appeal, according to Universal's exit polling. The under 18 crowd was the top age group, making up 31% of attendees. Bruce skewed slightly female at 53%, and parents with children under the age of 12 reportedly comprised 19% of the audience, 46% of them bringing their kids.

Audience reactions were in the heavens, boding well for Bruce's chances at powering past the $200 million mark. Universal said that 87% of moviegoers rated the picture either "excellent" or "very good." According to CinemaScore, which tracks opening night sentiments, 96% of attendees graded it an A, while the 55% of attendees who couldn't wait to see it gave it an A+. "None of the Jim Carrey movies since 1998 scored this high," noted Rocco.

If any time was going to see a comedy open like this it was 2003. The cultural climate has been in such a mood for laughs that it's truly been the year of comedy. Of the six movies that have already crossed the $100 million, half have been comedies—Anger Management, Bringing Down the House and How to Lose a Guy in 10 Days. Bruce and Daddy Day Care will soon join them for a total of five in just five months time, matching the five in total that reached the milestone in all of 2002.

Carrey and Universal have proven to be an unstoppable team. Their previous collaborations The Grinch and Liar Liar were the two most successful pictures of Carrey's career. The Grinch was the top domestic grosser of 2000 with a $260,044,825 haul, while Liar was the comedy blockbuster of 1997, pulling in $181,410,615.

Bruce and Liar Liar share more than just a studio and a star. Both were directed by Tom Shadyac, whose resume also includes the comedy hits Ace Ventura: Pet Detective and The Nutty Professor.

Deeper than that, though, the pictures both have a universal, "What If?" premise. For Liar Liar, it was "What if a lawyer was forced to the tell the truth for one day?" For Bruce, it was flat out stated in Universal's marketing campaign: "If you could be God for one week, what would you do?" The trailer would then cut to Carrey strutting down a street, lip-synching "I've Got the Power," then blowing up a fire hydrant, looking up a hot chick's skirt, enhancing the breasts of his girlfriend, making his dog use the toilet, etc. The overall impression conveyed was that Jim Carrey is back in a Jim Carrey movie, or as Rocco explaind, "It's Jim Carrey doing what he does best."

Since his astonishing 1994-95 period of five smash hits in a row—Ace Ventura, The Mask, Dumb and Dumber, Batman Forever and Ace Ventura: When Nature Calls—Carrey's career has commercially been up and down. The downs associated with his artistic stretching, and the ups with his return to his highly animated brand of comedy.

In a sly reference to Carrey's attempts at and stated desire for more dramatic fare in his career, Carrey's character in Bruce wants to be taken more seriously in his bid to be a stolid anchorman instead of a wacky field reporter. He realizes and is expressly told over the course of the story that the ability to make people laugh is his greatest gift. In real life, it certainly is his most lucrative.

Bruce marks an auspicious start to a busy summer for Universal. On its schedule are 2 Fast 2 Furious on June 6, The Hulk on June 20, Johnny English on July 18, Seabiscuit on July 25 and American Wedding on Aug. 1. The slate has the potential to give the studio the kind of market share dominance it had during summer 2001—even overtly trying to repeat that period's The Fast and the Furious and American Pie successes—after three months of dormancy since February's The Life of David Gale and a relative box office silence since last November's 8 Mile.