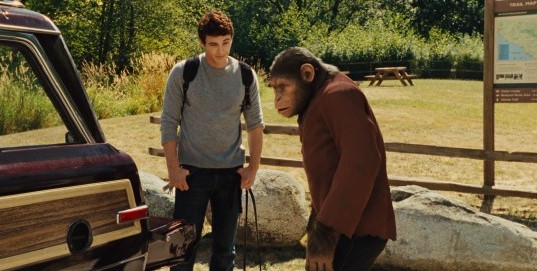 'Planet of the Apes' Prequel Lands June 2011
May 6, 2010 17:52 PDT - By Ray Subers - Box Office News
In the latest of a series of franchise-related release date announcements, 20th Century Fox revealed this afternoon that the tentatively-titled Rise of the Apes, a prequel to Planet of the Apes, will open June 24, 2011.

In Fox's bulletin, they provided a very basic story outline: "Rise of the Apes (Tentative Title) is an origin story in the truest sense of the term. Set in present day San Francisco, the film is a reality-based cautionary tale, a science fiction/science fact blend, where man's own experiments with genetic engineering lead to the development of intelligence in apes and the onset of a war for supremacy." Fox also pointed out that Rise of the Apes would be the first entry in the series to use motion capture to create computer-generated apes instead of using costumed actors. WETA Digital has been put in charge of the visual effects, and they will be using some of the effects technologies developed for Avatar.

Planet of the Apes, starring Charlton Heston, kicked off the original five-part series with $32.6 million in 1968, or around $200 million adjusted for ticket price inflation. The following movies gradually lost audience interest, and the final chapter, Battle for the Planet of the Apes, scrounged together $8.9 million in 1973. In 2001, director Tim Burton rebooted the series with Planet of the Apes (2001) but, despite making just over $180 million, the movie was generally reviled by both critics and audiences (Box Office Mojo users awarded the movie a dismal "C" grade). It's currently unclear if Rise of the Apes is being developed as a prequel to Burton's movie or to the original series.

Fox has selected the director, writers and producers for Rise of the Apes, though none of them are instantly recognizable names. Director Rupert Wyatt's only prior release, thriller The Escapist, grossed $13,439 last April. Meanwhile, writer/producers Rick Jaffa and Amanda Silver don't have any credits since The Relic, which made $32.2 million in 1997. Finally, first timers Dylan Clark and Peter Chernin are also onboard as producers.

Rise of the Apes will share the June 24, 2011 date with Disney/Pixar's Cars 2. Also currently scheduled for June 2011 are Kung Fu Panda: The Kaboom of Doom, X-Men: First Class, Fast Five, Something Borrowed and Green Lantern.