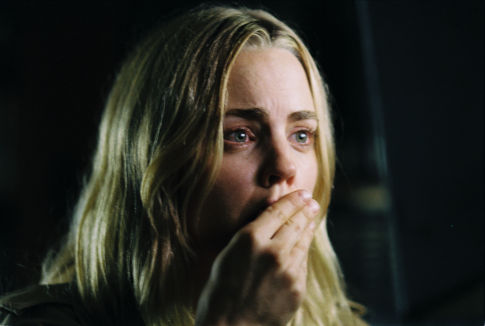 'Horror' Takes $23M Toll on Tax Weekend
April 18, 2005 13:24 PDT - By Brandon Gray - Box Office News
The weekend of April 15 was scary enough with Americans having to pay income taxes to the government, but MGM, in its last hurrah, piled on the fright with The Amityville Horror.

The $19 million horror remake, the final wide release MGM will distribute on its own before Sony takes over the company, reaped $23.5 million from 3,323 theaters to top the weekend—a debut in the same league as this year's White Noise, Hide and Seek and Boogeyman. According to MGM's exit polling, the audience was 56 percent female and 62 percent under the age of 25.

"I think even the kids who hadn't seen the original had at least heard of it," MGM's head of distribution Erik Lomis told Box Office Mojo, explaining the appeal of Amityville. "Then there's that whole 'based on a true story' thing the kids seem to buy into these days. The filmmakers delivered some striking visuals, and it's a chilling story."

The marketing campaign for The Amityville Horror pumped up the "based on a true story" aspect of the picture—about what allegedly happened to the Lutz family in their 28-day stay at 112 Ocean Ave.—despite the fact that it was revealed as a hoax long ago. The strategy employed was similar to horror remake The Texas Chainsaw Massacre, a $10 million production that opened to $28.1 million in October 2003 and closed with $80.6 million. Amityville's trailers, which included the 1979 original's theme music and shots of the famed house's eye-like windows, creeped out potential moviegoers, but they were still in the loud and flashy mold of most horror movies today.

April is usually bereft of horror, giving haunted taxpayers a rest. The Amityville Horror's opening is the highest the genre has seen at this time of year, and the next best April scares came from Anaconda. Also released on tax weekend, the 1997 killer snake movie squeezed $16.6 million out of the gate, or about $23 million adjusted for ticket price inflation. At the time, its success was partly attributed to Americans seeking a cathartic experience after the government's pinch.

The original Amityville Horror, released by the defunct American International Pictures on July 27, 1979, scared up $86.4 million in its day—which would equal about $220 million today accounting for ticket price inflation. Its $7.8 million opening weekend at 748 theaters adjusts to about $20 million today. It spawned seven sequels, though only the next two, Amityville II: The Possession and Amityville 3-D, made it into theaters.

The Amityville Horror was green-lighted shortly after the success director Michael Bay (Pearl Harbor) had producing The Texas Chainsaw Massacre through his Platinum Dunes banner. MGM and Platinum Dunes agreed to make Amityville, but then Miramax's genre unit Dimension Films entered the fray with a competing Amityville project that planned to beat MGM's to theaters. Ultimately, Dimension struck up a separate producing deal with Platinum Dunes, leading the two studios to collaborate on Amityville—MGM handled domestic distribution, while Dimension has overseas rights.

After sharp declines last weekend and only one new major movie competing for theaters this weekend, holdovers rebounded with drops generally in the 20 to 30 percent range.

In its second frame, Paramount's Sahara dried 28 percent to $13.1 million for $36.4 million in 10 days. By comparison, Hidalgo fell 37 percent last spring after a similar debut and ended with $67.3 million—both desert-set adventures cost over $100 million to make.

The exception was Sin City, which fell harder than it did last weekend with a 53 percent drop to $6.7 million. Still, the $40 million comic book adaptation has racked up $61.3 million in 17 days and is already director Robert Rodriguez's top movie outside of the Spy Kids franchise.

In limited release, the box office blitz for Kung Fu Hustle continued. Holding at seven theaters, the action comedy import eased eight percent to $247,613, averaging $35,373 per site. Next weekend, distributor Sony Pictures Classics will push it to about 2,300 theaters, joining fellow Asian martial arts pictures Crouching Tiger, Hidden Dragon and Hero as the only foreign language movies to play at over 2,000 venues.

NOTE: This report was originally published on Sunday, April 17 and was updated on Monday, April 18 with actual grosses.