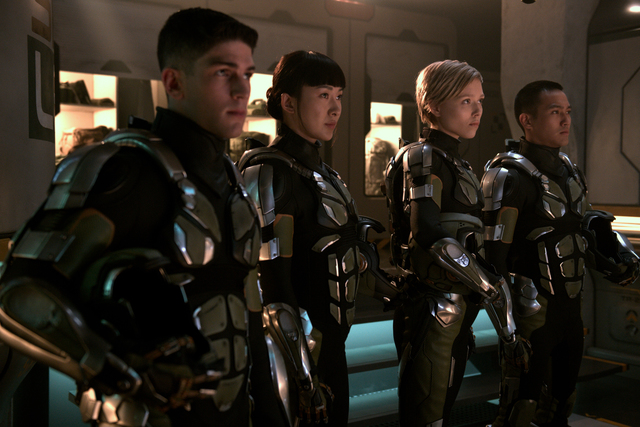 'Pacific Rim Uprising' Looks to Dethrone 'Black Panther' Atop the Weekend Box Office
March 22, 2018 6:21 PDT - By Brad Brevet - Box Office News
SATURDAY AM UPDATE: With an estimated $10.36 million on Friday, Universal and Legendary's Pacific Rim Uprising led the Friday box office, on its way to a $25+ million weekend and the #1 spot. This pushes Disney and Marvel's Black Panther to second for the first time after six weekends in theaters, but that that isn't to say the film is slowing down as it brought in an estimated $4.38 million on Friday and is now less than $5 million shy of topping The Avengers and becoming the highest grossing superhero movie of all-time domestically.

In third, Roadside and Lionsgate's I Can Only Imagine continues its strong performance, delivering an estimated $3.79 million on Friday and looking at an impressive $13.5 million second weekend, signaling only a 21% drop.

Currently looking to round out the top five is the disappointing performance of Paramount and MGM's Sherlock Gnomes, which opened in 3,662 theaters this weekend and brought in just $2.8 million on Friday, heading toward a three-day opening around $10 million. The film received a "B+" CinemaScore from opening day audiences.

Sony and Affirm's Paul, Apostle of Christ opened with an estimated $1.66 million and is looking at a $5+ million opening from 1,473 theaters. The film received an "A-" CinemaScore.

And battling for that last spot in the top ten are Global Road's Midnight Sun and Bleecker's Unsane, both looking at $4+ million debuts. Midnight Sun received an "A-" CinemaScore while Unsane received a "B-".

Finally, Wes Anderson's Isle of Dogs began its platform debut this weekend in 27 theaters and brought in an estimated $555,585 and is looking at a $1.7 million opening.

FRIDAY AM UPDATE: Universal and Legendary's Pacific Rim Uprising grossed a solid $2.35 million from Thursday late night shows in 2,850 locations. This is down from the $3.6 million the first film brought in before opening with $37.2 million and just ahead of Tomb Raider's $2.1 million in previews last weekend before opening with $23.6 million.

Bleecker's release of Unsane kicked things off last night with $300,000 from previews beginning at 7PM.

WEEKEND PREVIEW: Five new wide releases make their way to theaters this weekend along with the first stage in the platform release of Wes Anderson's Isle of Dogs. Of the bunch, Pacific Rim Uprising and Sherlock Gnomes will attempt to be the first film (or films) to top Black Panther at the weekend box office, ending Panther's five weekend streak at #1. Additionally, Sony will be hoping some of the good fortune that befell I Can Only Imagine last weekend will rub off on their release of Paul, Apostle of Christ while Bleecker Street debuts Steven Soderbergh's latest film, Unsane, and Open Road releases Midnight Sun.

While it's not entirely a sure thing, it appears this is the weekend Black Panther's reign as king of the weekend box office comes to an end, most likely at the hands of Universal and Legendary's Pacific Rim Uprising. The sequel arrives on the heels of Guillermo del Toro's Pacific Rim, which delivered a lackluster domestic performance in 2013, but thanks, in large part, to the more than $309 million the film grossed overseas a sequel was greenlit as a global play.

While this information provides some guidance, a forecast for Uprising is proving difficult as a debut anywhere from $18-24 million provides a wide range for opportunity. Our current expectation is for an opening on the lower end of that range, looking at a ~$21 million debut with a bit of room on either side. While not mind blowing, it should be enough to take the weekend top spot.

Internationally, Pacific Rim Uprising will open day-and-date in 62 markets including France, Australia, Brazil, Germany, Korea, Russia, Mexico and the U.K. & Ireland. Legendary East will also open the film day-and-date in China, which accounted for over 36% of the first film's international gross.

This leaves Black Panther in position for a second place finish, pulling in around $16 million, dropping around 40% and pushing the film's domestic cume right around $630 million, enough to make it the highest grossing superhero release domestically of all-time.

In third we're looking at Paramount and MGM's release of Sherlock Gnomes, the second sequel of the weekend being released by a studio different than the one that released the first film. In 2011, Disney released Gnomeo and Juliet and delivered a $25.3 million opening and $99.9 million at the domestic box office. Paramount's expectations are currently in the low teens from 3,662 locations and, like Uprising, we're seeing a rather wide range of possibility and an outside chance it could challenge Black Panther for second place.

Looking at IMDb page view data the film was showing great gains as of a month ago, performing well alongside film such as The Emoji Movie and Planes. However, over the past few days interest has tapered dramatically, occasionally falling below films such as Storks, The LEGO Ninjago Movie and The Nut Job. While this doesn't paint a clear picture of what to expect this weekend, it does provide some insight, leveling expectations and pushing us closer to the studio's expectations rather than forecasting a performance threatening $20 million.

All told, an opening around $15 million seems a reasonable expectation at this point, though we wouldn't be at all surprised should some of the signals we were tracking earlier result in a performance a couple million higher.

Internationally, Sherlock Gnomes debuted in five markets last weekend with $2.1 million and will open in an additional 14 smaller markets this weekend, before opening in Mexico at the end of March and continuing its international from there on out.

In fourth look for WB and MGM's Tomb Raider to dip around 45% for a second weekend around $13 million, pushing the film's domestic cume near $45 million after ten days in release.

In fifth look for last weekend's surprise performer, the faith-based feature from Roadside and Lionsgate, I Can Only Imagine. However, after the film's impressive $17 million debut from just 1,627 locations last weekend, this weekend the film is taking advantage and expanding into 2,252 locations (+625). Seeing how this is somewhat uncharted waters, comps to 36-38% second weekend drops for Heaven is for Real and The Shack don't necessarily seem to fit. This weekend's release of Paul, Apostle of Christ is also another factor to consider, though Imagine appears it may not be affected by the added competition. That said, we're looking at a 34% drop for a second weekend north of $11 million, pushing the film's domestic cume over $35 million.

When it comes to Sony and Affirm's Paul, Apostle of Christ, it will be opening in 1,473 theaters with industry projections anticipating a $4 million opening with comparisons to films such as Woodlawn, The Case for Christ, Do You Believe? and Young Messiah. Looking at IMDb page view performance for the same set of comps we see similar expectations, if not a bit higher, pushing the range from $4-5.4 million for the weekend.

The question is whether Paul's debut takes a chunk out of I Can Only Imagine's second weekend (or vice versa) or if the two films can coexist without causing too much damage to the other's performance. As we head toward Easter weekend, including next weekend's release of God's Not Dead: A Light in the Darkness into ~1,500 theaters, there will certainly be a lot of competition for those in the target audience and one thing is for sure, with its stellar opening and "A+" CinemaScore, I Can Only Imagine already has a leg up on the competition.

Also opening this weekend is Bleecker Street's Unsane, the latest film from Steven Soderbergh and what would appear to be something of a return to the same territory he touched upon in 2013's Side Effects, which debuted with $9.3 million and went on to gross over $32 million domestically. Unfortunately, we aren't seeing any real evidence Unsane is going to reach such heights as awareness appears to be closer to the likes of Before I Go to Sleep, which Clarius Entertainment debuted in 1,902 theaters in 2014 to just $1.8 million. This isn't to say we're expecting an opening quite that small, though we are currently having a hard time expecting anything more than $3.5 million, anything less and it could fall short of the top ten.

In a similar boat we find Midnight Sun the first release from IM Global and Open Road's collaboration, Global Road Entertainment. The film is opening in 2,173 theaters with tracking suggesting a debut around $4-6 million. While our analysis does present a range from $1.5-4.2 million, we can't currently go any higher than $2 million for the weekend.

Also this weekend, in its first stages of its platform release, Wes Anderson's Isle of Dogs will open in 27 locations in Los Angeles, New York, Washington DC, San Francisco, Toronto and Austin before finally going nationwide in mid-April. Anderson's films have always followed a platform release and have been known to bring in big per theater averages, including his last film, The Grand Budapest Hotel, debuting in just four locations with a ninth-best-all-time per theater average of $202,792. As a result, Isle of Dogs could add a little extra excitement to the weekend should it follow in the path of its predecessors.