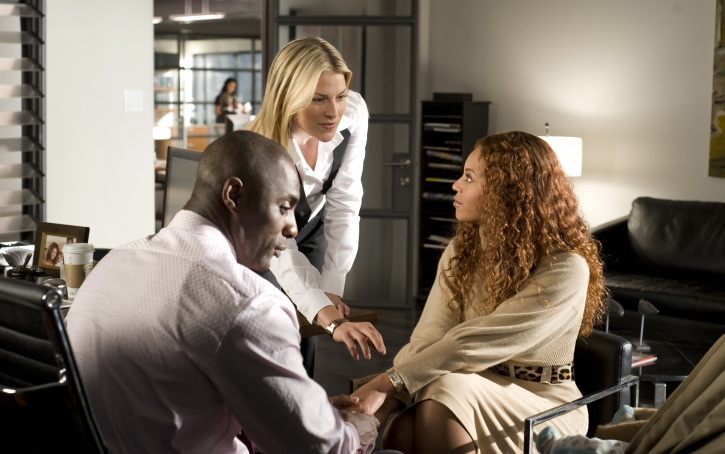 While Obsessed was exceptional, the other three nationwide openers were passable by the modest standards of their sub-genres. Fighting drew an estimated $4.5 million on around 2,400 screens at 2,309 venues. The action drama fared respectably well, delivering more in its opening day than Never Back Down and Annapolis. It's on track for an over $11 million weekend.

The Soloist made an estimated $3.2 million on nearly 2,200 screens at 2,024 theaters, which could lead to a weekend of nearly $10 million. The music drama had a much greater start than similarly-themed pictures like Resurrecting the Champ and Music of the Heart, though it trailed Ray and Radio among others.

Earth (2009) took in an estimated $2.9 million on close to 1,900 screens at 1,804 locations, and could pull ahead of The Soloist by weekend's close with over $10 million. That would be more than nature documentary benchmark March of the Penguins ever made on a given weekend, but that picture was a platform release, not nationwide out of the gate. Prior to the weekend, Earth posted a strong $4 million in its Wednesday debut, and its total is $8.5 million in three days.

Last weekend's champ, 17 Again, came in third on Friday with an estimated $3.9 million, down a typical 59 percent. With $32.2 million in eight days, the body switch comedy continues to follow the path of the last one, 13 Going on 30.

After a so-so start last weekend, State of Play had a relatively more severe drop than 17 Again, falling 55 percent on Friday to an estimated $2.1 million. That was a steeper decline than Body of Lies, and adult-oriented thrillers usually maintain much more of their audience in their second weekends.

Monsters Vs. Aliens is headed for a decent hold, grossing an estimated $2.1 million on Friday, while Fast and Furious, Hannah Montana The Movie and Crank: High Voltage rounded out the Top Ten with declines ranging from 50 to 70 percent. Also debuting, The Informers mustered a weak estimated $110,000 in an aggressive limited release of 482 venues.