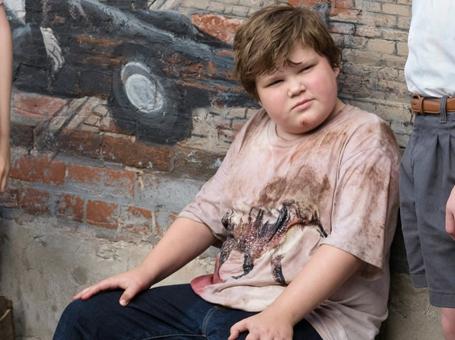 With an estimated $60 million this weekend, WB and New Line's It brought its domestic cume to $218.7 million after just ten days in release. As already mentioned, that makes it the largest September release ever, topping 1986's Crocodile Dundee ($174.8m). That number, of course, is not adjusted for inflation. Adjusted for inflation, however, It still finishes within the top ten and would likely finish around third after it soon tops $300 million domestically. The film is now just $14.2 million shy of becoming the largest R-rated horror film of all-time as it will soon top The Exorcist's $232.9 million domestic total (not adjusted for inflation).

The film is also delivering big numbers internationally. It opened in ten more overseas markets this weekend for a total of 56 where it grossed an estimated $60.3 million for an international cume that currently stands at $152.6 million for a global tally north of $370 million. The weekend included a $13.8 million opening in Mexico, the largest horror opening ever in the market and the third largest for a WB feature. It also makes Mexico the second highest grossing market for It after just three days. The top market for the film is the U.K. where it currently holds an estimated $27.7 million after remaining #1 in the market for a second weekend in a row with an estimated $8.2 million.

In second place is Lionsgate's release of CBS Films's American Assassin, which brought in an estimated $14.8 million from 3,154 locations, which puts it just ahead of Mojo's weekend forecast. It's a decent debut for the film, which also received a "B+" CinemaScore from opening day audiences of which 55% were male vs. 45% female with 29% of the overall audience coming in under the age of 35.

Third place went to Darren Aronofsky's mother!, which not only opened with a supremely disappointing $7.5 million from 2,368 locations, but became one of only 19 films to ever receive an "F" CinemaScore suggesting a 60+% drop next weekend and a short-lived theatrical experience. The overall audience was 44% male vs. 56% female, of which 18% were under the age of 25. For star Jennifer Lawrence this is her worst wide debut ever, falling almost $5 million shy of her much-maligned September 2012 thriller House at the End of the Street, which debuted with $12.2 million despite an 11% rating on RottenTomatoes compared to the 68% rating for mother!

At this point the best comparison is likely 2009's The Box, which also debuted with $7.5 million and received an "F" CinemaScore. That film went on to gross $15 million domestically.

Rounding out the top five was another Lionsgate hitman feature, this one The Hitman's Bodyguard, which has held on well over five weeks in release. This weekend it dipped just 26% and delivered an estimated $3.55 million as the $30 million production has now topped $70.3 million domestically.

Elsewhere, WB and New Line continue to hold on well with Annabelle: Creation, which is now just $100k shy of becoming the only August 2017 release to top $100 million domestically. The fourth film in the Conjuring franchise added an estimated $2.6 million this weekend for a domestic cume of $99.9 million. Added to an international total of $191.2 million, the film's global tally is nearing $300 million.

Fox also saw Alien: Covenant launch in its final international market with a $2.6 million debut in Japan bringing the film's international cume to $162 million. Covenant's $236.3 global total ranks it as the second largest film in the Alien franchise globally, though it remains $167.1 million behind Prometheus.

Topping the weekend's limited releases is Annapurna's release of Amazon's Brad's Status, which debuted in four theaters with an estimated $100,179 ($25,045 PTA). The film will expand into ~450 locations next weekend.

Next weekend Fox will debut the sequel Kingsman The Golden Circle into ~3,900 theaters and Warner Bros. will debut The LEGO Ninjago Movie into a similar number of locations while Entertainment Studios hopes to find some room on horror fan calendars with Friend Request in hopes the majority of them have had their fill with It.