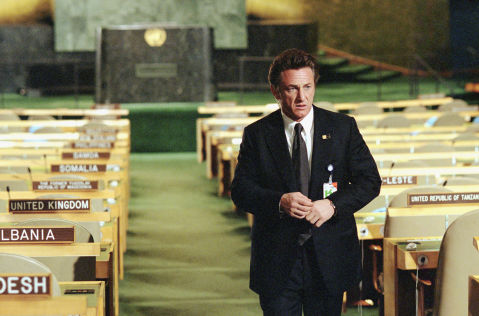 'Interpreter' Intrigues Nation
April 25, 2005 13:44 PDT - By Brandon Gray - Box Office News
Adults finally found a picture that spoke to them in The Interpreter, reiterating the fact that it's not just young males that translate to box office success.

The $80 million thriller starring Nicole Kidman and Sean Penn pulled in $22.8 million at 2,758 theaters, debuting in first place at the high end of industry expectations. According to distributor Universal Pictures' exit polling, the audience was 58 percent over the age of 35 and 58 percent female.

The opening, which was the highest of Kidman and Penn's careers as headlining stars, was nearly equal to Man on Fire's $22.8 million at 2,980 theaters on the comparable weekend last year. That Denzel Washington thriller wound up with a $77.9 million total. High profile adult thrillers often perform above expectations, including such other April titles as Phone Booth, Changing Lanes, Along Came a Spider and Rules of Engagement, but breaking $20 million is uncommon—The Interpreter ranks third among political thrillers behind Air Force One and The Sum of All Fears.

"Films of this genre usually don't open this well," Universal's head of distribution Nikki Rocco told Box Office Mojo. "Our marketing group was able to get the message out that this was a great, intelligent thriller with Nicole Kidman. But I think the real story is that this was the No. 1 movie worldwide." The Interpreter's overseas total rose to $25.7 million from 31 territories, topping the charts in the United Kingdom, Australia, Spain and Brazil among other nations.

The Interpreter raised its profile by being the first picture to be filmed at the United Nations building in New York City (Alfred Hitchcock had to settle for soundstage replicas and a matte painting for North by Northwest). From the outset, the trailer promised an exploration of a world few see. Polled moviegoers, though, rated Nicole Kidman, the story and the suspense as the top three reasons they saw the movie in Universal's research, with the political theme ranking low.

The Interpreter marks the return of Sydney Pollack as director after a six-year absence since his last picture, the 1999 disappointment Random Hearts, and Pollack has had commercial success with thrillers before, including The Firm and Three Days of the Condor. The Interpreter was Universal's first new release in ten weeks, and the studio has now logged four successful launches in a row, following Meet the Fockers, White Noise and The Wedding Date.

After success with Just Married and the still playing Guess Who, Ashton Kutcher couldn't lure many to A Lot Like Love. The $30 million romantic comedy, co-starring Amanda Peet, stuffed $7.6 million at 2,502 playdates, comparable to Freddie Prinze Jr. vehicles like Boys and Girls and Down to You. Without a strong hook, youthful romances tend to languish in theaters.

After two weeks of blistering business in Los Angeles and New York, general audiences tuned out the cartoonish Kung Fu Hustle, a Hong Kong import that raked in over $66 million in Asia. With its $6.7 million weekend at 2,503 venues—the widest ever for a foreign language picture—the heavily-promoted action comedy was not the next Hero or Crouching Tiger, Hidden Dragon, but comparable to the goofy, American-made Kung Pow! Enter the Fist. Distributor Sony Pictures Classics said that 70 percent of the audience was males 18 to 40.

"We're very happy, because we got a picture that is in a foreign language with no stars, and the audience satisfaction was through the roof," said Sony Pictures Classics co-president Tom Bernard, likening the reaction to sleeper smash My Big Fat Greek Wedding, which launched in April 2002. "We were great in the metropolitan areas, but had a more difficult time in the rural areas of the Red states. Keep your eye out for this one. It's a marathon, not a sprint."

Looking like a remake of Ruthless People, comedic supporting player Anthony Anderson's first go at top billing, King's Ransom, was ignored with $2.1 million at 1.508 locations. Initially set as a limited release, distributor New Line bounced the kidnapping comedy around the release schedule and didn't screen it for the press.

The Amityville Horror grabbed $13.7 million in its second weekend for $43.3 million in 10 days, down 42 percent in a solid hold by horror genre standards. Sahara hung around in its third weekend, falling 31 percent to $9.0 million for $48.9 million in 17 days.

• Review: 'A Lot Like Love' - Falling in Love for Dummies

• Review: 'The Game of Their Lives' - Soccer Pic Packs Kick

NOTE: This report was originally published on Sunday, April 24 and was updated on Monday, April 25 with actual grosses.