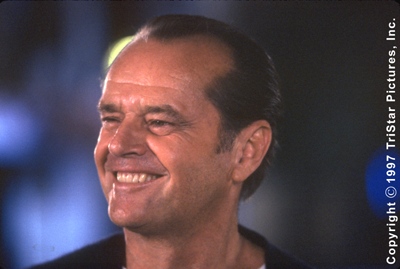 'Georgia Rule' and 'Cagney and Lacey'
May 11, 2007 0:53 PDT - By Scott Holleran - Columns
Burbank, California—The prospect of seeing Jane Fonda as a conservative grandmother parenting Lindsay Lohan's wild child has comic makeover possibilities. With a script by Mark Andrus, whose credits include As Good as It Gets, director Garry Marshall's Georgia Rule looked like it might be worth a few laughs.

Starring Felicity Huffman, toughing it out in a physically exhausting role as Lohan's self-absorbed Bay Area mom, with Dermot Mulroney as a grumpy widower, Cary Elwes as Lohan's status-seeking stepdad and Hector Elizondo, Laurie Metcalf and a cameo by composer Paul Williams (the Smokey and the Bandit trilogy), the trashy city kid in a small town framework has a colorful cast. Fonda and Huffman are fine as clashing mother and daughter and the generational battle explodes every so often.

But it's a maudlin, disorderly mess. Lohan's crude character uses sex with nearly every male in town and, somewhere between her wrestling a young boy to arousal and crawling into bed with her mother's ex-boyfriend, she claims she was sexually abused. The laughs stop there and, despite everyone's best efforts, Georgia Rule ends up minimizing its multiple issues.

Executive Producer Barney Rosenzweig, who rescued the 1982-1988 show from cancellation and eventually married Gless, recently talked to me about the female-driven cop show. He remembered that he had pledged to CBS that each episode would involve a moral victory.

"In one episode, Cagney and Lacey didn't just not catch the bad guy, they caught the wrong guy. The network asked, 'what's the moral victory here?' I explained that they had made a mistake, moved on and told a joke; they were indefatigable," he said. "It was a triumph over adversity." As Gless comments on the feature, Cagney and Lacey was not about two women cops—it was a show about two cops who were women. "Besides its credibility, the thing I'm proudest of is the consistency and quality," he said.

Rosenzweig, who started in MGM's mailroom and is still married to Gless—they watched this year's Oscars with Tyne Daly—tells the series' entire story in his new book, Cagney and Lacey…and Me. He doesn't leave out that CBS ousted the series' original Christine Cagney, played by Meg Foster, though the DVD unfortunately does not include Foster's first six episodes as Cagney.

Gless took over the role and scored a hit for six years, followed by four Cagney and Lacey TV movies. Foster, who had played Hester Prynne in a PBS production of Nathaniel Hawthorne's The Scarlet Letter, later guest starred on Rosenzweig's other show with Gless, The Trials of Rosie O'Neill. Tyne Daly, who'd been paired as 'Dirty Harry' Callahan's partner in Clint Eastwood's The Enforcer, went on to star on Broadway and Gless, who narrated the Oscar-nominated documentary Ayn Rand: A Sense of Life, is slated to star in a new cable series, Burn Notice.

Rosenzweig, 69, plays tennis and doesn't miss the grind of arbitrary network TV demands. "I feel great," he said, "and I don't want to feel like I have to audition anymore." He maintains that, with 80 or 90 percent of today's TV series owned by the networks, corporate control hampers quality. "It used to be that if Norman Lear went to ABC with a series, which he did with All in the Family, and they didn't want it, he could go [develop it at] another network. Not anymore."

Despite feminist accolades, the quick-witted Cagney and Lacey were poor poster figures for political correctness—they were two hardworking, strong-minded police officers. The pair pass a flasher in the opening title sequence and walk on by—Rosenzweig said one of them actually says, "put that thing away—you never know where it's been"—they use guns and Cagney dons a fur coat. Rosenzweig said it's real coyote fur.

"Cagney was a right-wing character," he remembered. "The heart of our success was that we created a backstory for each character. They had different views, so that created conflict, which makes good drama. My 12-year-old granddaughter came out and we were looking at DVDs and I let her watch a new one on the condition that she watch an old one—she picked Rear Window—and I said, 'would you like to see Grandma when she was younger?' She did and we watched Cagney and Lacey and she loved it. Now she watches them all the time."

The actors of Carnegie Mellon's graduating drama class for 2007 took the stage for numerous skits at L.A.'s Coronet Theatre in the Pittsburgh university's annual Showcase presentation. This year's class is a band of multitalented performers. Each graduate—notably Thea Brooks, Michelle Wong and Stephen Rosenberg—has something unique to offer.