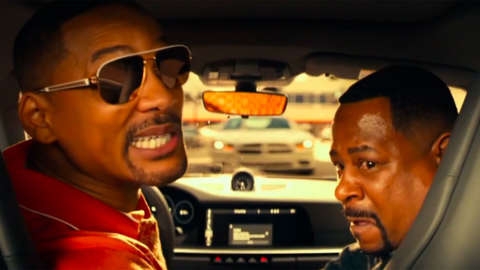 Debuting with an estimated $68.1 million, Sony's Bad Boys for Life exploded into theaters, delivering the second largest Martin Luther King weekend gross ever, topping 2014's Ride Along, which opened with $48.6 million. The film's $59.17 million three-day performance is also the second largest January three-day debut, just behind 2015's American Sniper ($89.26m) as well as the studio's largest R-rated opening ever, topping the $57 million opening for 22 Jump Street back in 2014.

While the records are great, some of the best news the film could receive began with the solid critical response followed by a welcome audience reaction, resulting in an "A" CinemaScore and a 97% audience rating on RottenTomatoes. As for that crowd, the opening weekend audience was 55% male with 61% of the overall crowd coming in aged 25 or older.

It will be interesting to see where the film goes from here as its three-day tops the $56.8 million debut for John Wick: Chapter 3, which went on to gross over $171 million domestically, and is right behind the likes of Mission: Impossible - Fallout ($61.2m opening), Straight Outta Compton ($60.2m opening) and Hobbs & Shaw ($60m opening). You can follow these comps throughout the film's release in our showdown here.

In second place is Universal's Dolittle, a $175 million production that entered the weekend with rather low expectations and some dreadful reviews. The film, however, managed to outperform those mediocre expectations and delivered an estimated $30 million four-day performance. To go along with that, the film received a "B" CinemaScore from opening weekend audiences and while the reviews were poor, the film holds a decent, 76% audience rating on RottenTomatoes. The crowd coming in was 51% female with 43% of the audience aged 25 or older.

Internationally, the film got its overseas start last week in four markets and expanded its global footprint this weekend to a total of 46 markets this weekend, bringing in an estimated $17.2 million for a global tally that is now just shy of $50 million. Leading the way i Australia with a $2.36 million debut followed by Indonesia with a $2.1 million opening. The film's top market is Korea where it has brought in $10.6 million as it enters its second week in release. There are still plenty of markets where the feature has yet to open including Argentina (Jan 23), Spain (Jan 24), Vietnam (Jan 25), Germany (Jan 30), Italy (Jan 30), Mexico (Jan 31), France (Feb 5), the UK (Feb 7), Brazil (Feb 20), Russia (Feb 20), China (Feb 21) and Japan (Mar 20).

Universal also took third place for the holiday weekend with their Oscar contender 1917 bringing in an estimated $27 million for the four-day holiday, bringing its domestic cume to $81.6 million as it enters its fourth week in release and only its second week in wide release. The film received a hefty ten Oscar nominations last week and is riding high after a strong performance at the Golden Globe Awards. Internationally, the picture added an additional $26 million this weekend from 37 Amblin and Universal international markets, bringing the international cume to $62 million through Sunday and a global total reaching $143.5 million.

Sony finished in fourth place with Jumanji: The Next Level with an estimated $12.57 million for the four-day holiday weekend, bringing its domestic cume to $273.48 million as it enters its sixth week in release. Internationally the film added another $17 million, bringing its overseas cume to $438 million for a global tally that now stands at $709 million.

Rounding out the top five is Disney's Star Wars: The Rise of Skywalker, which added an estimated $10.6 million over the holiday weekend, bringing its domestic cume just shy of $495 million, which puts it in the top 15 all-time domestically. Internationally, the film added another $10.9 million, bringing the overseas cume to $534.6 million for a global tally topping $1.026 billion.

It also must be mentioned once again, for what is now six weeks in a row, Lionsgate's Knives Out has enjoyed the smallest drop in the top ten among wide release holdovers. Dipping just -23.6%, the film brought in an estimated $4.3 million for the three-day and $5.25 million for the four-day holiday, bringing its domestic cume to $146.9 million as it enters its eighth week in release. Add $131 million internationally to that total and the picture has now generated nearly $278 million globally.

Outside the top ten, GKIDS debuted director Makoto Shinkai's animated feature Weathering With You this past Wednesday where it brought in over $3 million in its first two days in release, which made it the studio's highest grossing film ever in just two days. This weekend it played in 486 locations where it brought in an additional $2 million, pushing its domestic cume over $5 million more than double the studio's 2018 release Mary and the Witch's Flower, which was GKIDS's largest grossing film ever until now. The film has now grossed over $182 million globally since debuting in Japan last July.

Next weekend sees a pair of new wide releases in Guy Ritchie's The Gentlemen (which has already brought in $18.4 million from three markets) and the Universal horror The Turning.

You can check out all of this weekend's three-day estimated results right here and four-day estimates here. We'll update estimates tomorrow morning followed by weekend actuals on Tuesday afternoon.