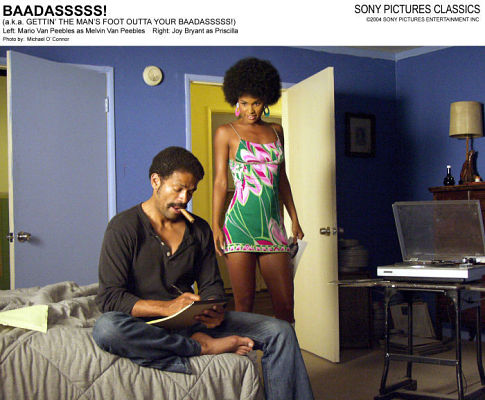 Nominees for the Turning Leaf Someone to Watch Award,

the DIRECTV/IFC Truer Than Fiction Award, and the

LOS ANGELES (November 30, 2004)—Nominations for the 20th IFP Independent Spirit Awards were announced this morning, including nominations for Best Feature, which are Baadasssss!, Kinsey, Maria Full of Grace, Primer, and Sideways. Also announced were the finalists for the Turning Leaf Someone to Watch Award, the DIRECTV/IFC Truer Than Fiction Award and the Bravo/American Express Producers Award. Dennis Quaid and Selma Blair served as nomination presenters at the event.

"Serving on the Nominating Committee is an incredible privilege. You get to discuss the entire spectrum of independent filmmaking with 12 of our country's finest filmmakers. Watching all of the submitted films gives you an encyclopedic knowledge of the current state of independent cinema. This year, there was a wonderful leap in quality amongst ultra-low budget indies," said committee chair Jeff Kleeman.

Dawn Hudson, Executive Director of IFP/Los Angeles added, "Over the last 20 years, the Spirit Awards have consistently celebrated the most talented artists—known and unknown—working in independent film. We've honored many filmmakers and artists at the beginning of their careers, and this year is no different. Six of the nominated films haven't even received theatrical distribution, and several more have had only the most-narrow distribution. We're proud to recognize the outstanding work done by independent veterans alongside the exciting new voices in film."

This year the Spirit Awards Nominating Committee chose to give a Special Distinction Award to the ensemble cast of Mean Creek: Rory Culkin, Ryan Kelley, Scott Mechlowicz, Trevor Morgan, Josh Peck, and Carly Schroeder. In the words of the Nominating Committee, "These young actors turned in performances so uniformly unselfish, and so intricately in tune with one another, that it became impossible to single any one of them out from their extraordinary achievement together. Their work is of such high quality that it moves beyond craft to achieve that mysterious truth and beauty that constitutes the finest acting."

Selected from more than 190 submissions, the winners will be unveiled at the IFP Independent Spirit Awards ceremony on Saturday, February 26, 2005, in a tent on the beach in Santa Monica. The Master of Ceremonies, Honorary Chairs, and Presenters will be announced shortly.

Diana Zahn-Storey returns to produce the event for the eleventh consecutive year. The ceremony will air live on IFC (Independent Film Channel) at 5:00 pm EST on Saturday, February 26, 2005 and is edited for rebroadcast on Bravo the same evening at 10:00 pm EST/PST, following an exclusive one-hour red carpet show at 9:00 pm EST/PST.

Films nominated for the IFP Independent Spirit Awards were selected based on the following criteria:

• Economy of means with particular attention paid to total budget and individual compensation;

In order to be eligible for consideration, submitted films must have shown at a commercial theater during the 2004 calendar year or have played at one of the following seven film festivals: the Los Angeles Film Festival, New Directors/New Films, New York, Seattle, Sundance, Telluride, or Toronto.

Turning Leaf Someone to Watch Award

The 11th annual Turning Leaf Someone to Watch Award recognizes a talented filmmaker of singular vision who has not yet received appropriate recognition. The award includes a $20,000 unrestricted grant, funded by Turning Leaf Vineyards. The Finalists are:

• Jennifer Reeves, director of The Time We Killed

The 9th annual DIRECTV/IFC Truer Than Fiction Award is presented to an emerging director of non-fiction features who has not yet received significant attention. The award includes a $20,000 unrestricted grant, funded by DIRECTV and IFC. The Finalists are:

• Zana Briski and Ross Kauffman for Born Into Brothels

• Gina Kwon, producer of The Good Girl and Me and You and Everyone We Know