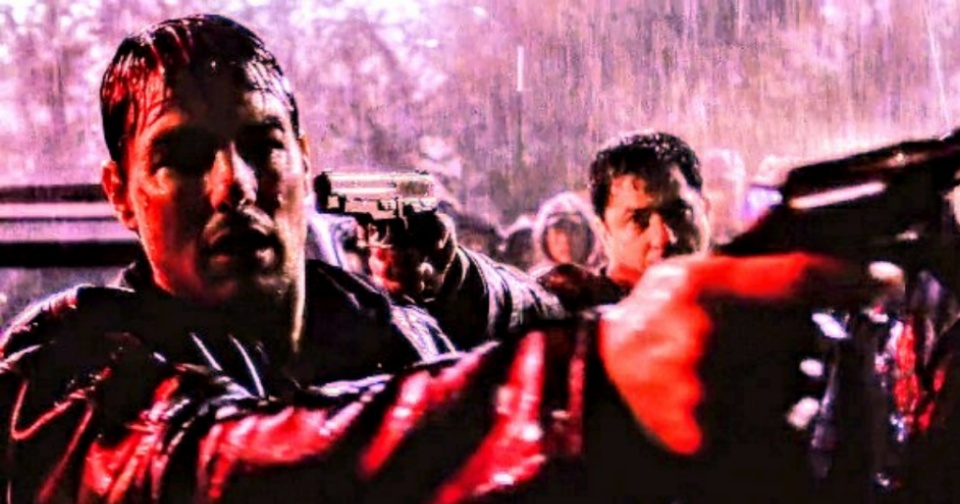 According to Paramount's exit polling, the audience was 53 percent male and evenly split between those over and under the age of 25. Paramount said that the top three reasons people checked off for seeing the picture were Tom Cruise, Steven Spielberg and the title. Opening night pollster CinemaScore showed moviegoers grading the picture a "B+," which effectively indicates lukewarm word-of-mouth—Batman Begins, for instance, scored an "A."

A near global launch, War of the Worlds waged an additional estimated $102.5 million from 78 countries overseas through July 3, the biggest international opening ever for a non-sequel—propelling the worldwide tally to $215.2 million.

"We couldn't be more thrilled between domestic and international," Paramount Pictures' vice-chairman and chief operating officer Rob Friedman told Box Office Mojo. "I think that it's the family-in-jeopardy thriller in combination with the appeal of Spielberg and Cruise [that's drawing audiences], and I think that young people are responding very well to the effects and the action."

Scuttling the benevolent aliens of his early blockbusters Close Encounters of the Third Kind and E.T.: The Extra-Terrestrial, War of the Worlds marks Mr. Spielberg's first thrill ride event since The Lost World: Jurassic Park in 1997, which stands as his opening weekend benchmark at $72.1 million. The director previously collaborated with Mr. Cruise on Minority Report, a 2002 sci-fi thriller that bowed to $35.7 million en route to $132.1 million. Co-produced by Paramount and DreamWorks SKG on a budget of at least $132 million, War of the Worlds is, by far, the most expensive movie of Mr. Spielberg's career.

The Independence Day holiday weekend is no stranger to alien invasions and other disasters, from Terminator 2: Judgment Day to Armageddon. As massive as War of the Worlds is, it still trails the 1996 six-day opening of fellow alien disaster Independence Day in terms of number of tickets sold. ID4, as it was dubbed at the time, grossed $104.3 million at 2,882 theaters, which would equal around $150 million today adjusted for ticket price inflation.

Though War of the Worlds eschewed Independence Day's sunny disposition amidst the decimation of famous American landmarks, its marketing campaign effectively conveyed a spectacle of terror, guided by Tom Cruise and child co-star Dakota Fanning, whose frightened reaction shots accounted for much of the sense of dread. By showing the horror through the eyes of a small family, Mr. Spielberg and company took an approach similar (albeit far more destructive) to M. Night Shyamalan's 2002 alien invasion thriller Signs, which opened to $60.1 million at 3,264 theaters on its way to $228 million.

Prior to War of the Worlds' release, Mr. Cruise's animated proclamations of love for Katie Holmes and his emphatic criticism of psychiatry began to overshadow the picture itself in the media. "I don't think it has had any effect positive or negative," Friedman said. War of the Worlds wasn't exactly a star vehicle, but Mr. Cruise was inextricably tied to the project, and, given the box office, moviegoers deemed him, at the very least, an acceptable personality to take this ride with. He's arguably still the top gun at the multiplex as War marks his sixth picture in a row to cross the $100 million mark.

The weekend's other wide release, Rebound, had little bounce, netting $5 million at 2,464 theaters over the three-day weekend. The Martin Lawrence basketball comedy is the second of three movies this season about funnymen coaching ragtag kids' sports teams, following Will Ferrell's Kicking and Screaming and preceding Billy Bob Thornton's The Bad News Bears, a remake of 1976 movie that influenced the genre. Rebound posted the weakest opening of Lawrence's career.

As expected, the year-to-year slump continued for the 19th straight weekend with an overall total of $141.6 million, down from the $165.2 million of the comparable frame last year. Despite War of the Worlds' powerful start and the continued strength of such pictures as Batman Begins, Mr. and Mrs. Smith and Madagascar, this weekend did not have the firepower to overcome Spider-Man 2's record-breaking debut and the more potent holdovers of last year.

NOTE: This report was originally published on Monday, July 4 and was updated on Tuesday, July 5 with actual grosses.