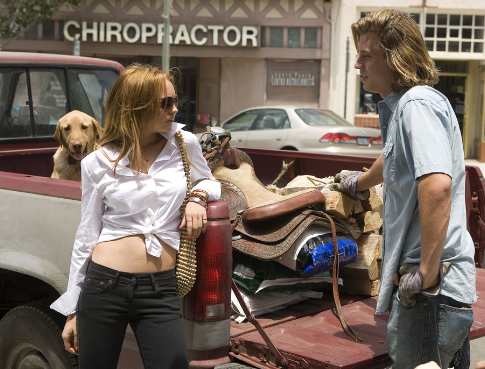 Starring as the title character in Nancy Drew, Emma Roberts plays the sleuth as stuck-up and thoughtless, not kind and intelligent as her dad, Carson Drew, claims. Nancy bosses boys around for kicks, hurts them, and is driven by helping others, not by solving the mystery. Not that the Hollywood Hills mumbo jumbo in this movie qualifies as especially intriguing. Nancy Drew's brightest idea involves the use of a paper clip to retrieve an important document.

The supposedly smart, small town girl coming to L.A. to solve a glamorous starlet's disappearance might have worked with a better script—this lame adaptation of the Carolyn Keene books is confused and disjointed—but bland Roberts is notably flat. Fans of the literary series are better off reading the novels or watching the Thirties pictures, such as Nancy Drew, Reporter, starring spunky Bonita Granville as Nancy Drew.

Another stinker, the interminable Evening, proposes that life itself is an endless mystery and all we can do is ride it out until we die, staring wistfully off into space after a lifetime of settling for less. With Vanessa Redgrave as a dying old woman trying to reconcile her life before she expires, this ponderous soap opera uses awkward flashbacks.

Again, the leading lady nearly falls asleep in the main role. As the younger Redgrave character, Claire Danes—constantly fussing with her hair and looking pained—is more affected than lovesick, as her character's apparently intended to be. The object of her affections is Patrick Wilson, a good actor who's also lost. They fiddle around until the wealthy East Coast wedding they're attending takes a tragic turn.

All of this has something to do with Redgrave—joined by Meryl Streep and Glenn Close to no particular effect—feeling like she's "made of wrongness," making peace with her daughters (Toni Collette and Natasha Richardson) and chasing a butterfly. Evening looks quite lovely but it projects the emotional power of a dimestore romance and it is more fleeting than aching.

Heartache is at the center of Ethan Hawke's adaptation of his own novel, The Hottest State, which opens Aug. 27. The story concerns an aimless young man who wanders in and out of love—sometimes agonizingly unrequited love—and the bleak affair is matched by an equally bleak musical score by Jesse Harris, who penned the sultry hit record "Don't Know Why" for Norah Jones. Jones performs a new song—one of 16 on the soundtrack (scheduled for Aug. 7 release)—and it's one of several tunes worth hearing. Other tracks include "Somewhere Down the Road" by Feist and numbers by Willie Nelson, The Black Keys, and Emmylou Harris.

Presently on tour is a young Denver band called The Fray, whose haunting title-track hit, "How to Save a Life," heard in the trailer for Reign Over Me and used on TV's Grey's Anatomy, has me hooked on its piano melody. Lead singer Isaac Slade doesn't exactly enunciate when he sings, but the 25-year-old's mumbled caterwauling of the song's lyrics—based on his experience with a teenager struggling to overcome a drug fixation—tap addiction's heartbreaking melancholy. The band plays a couple of nights this summer at the Greek.