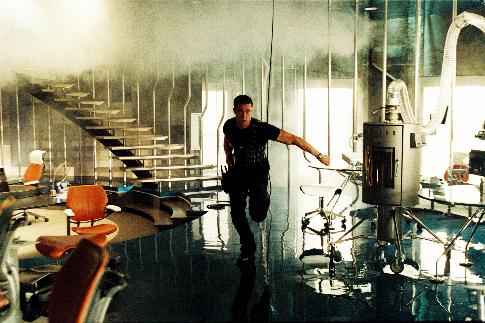 For all the press speculation over whether playboy Pitt and temptress Jolie are having an affair that may have broke up Pitt's marriage to sweetheart Jennifer Aniston, Mr. and Mrs. Smith appealed as a fun, summer action picture with sexy, glamorous actors—a stylish battle of the sexes like a True Lies-meets-The War of the Roses that both sexes could agree to see. (Whether it fits the bill is another story.)

"The buzz was incredible coming into the weekend, but I never expected we'd top $50 million," Fox's head of distribution Bruce Snyder told Box Office Mojo. According to Fox's exit polling, about 56 percent of Mr. and Mrs. Smith's audience was female and 57 percent was over the age of 25. Considering past movies that became celebrity gossip events, Snyder couldn't say if the hype hurt or helped. "You can look back and half of them work and half of them don't," Snyder said. "[But] this is not Gigli."

Pitt has been a steady box office draw through the years, but his media coverage has always far eclipsed his bankability. Jolie essentially has one hit to her credit in the past five years (Lara Croft: Tomb Raider). The fame of Pitt and Jolie—who are constantly being named the sexiest man and woman alive in the celebrity press—transcends their mixed box office appeal. People fawn over them, not their movies.

In the $110 million Mr. and Mrs. Smith, Pitt and Jolie embrace their personas, and their combined celebrity proved greater than the sum of its parts. Pitt made his name as an intense pretty boy who's unattainable, and Jolie as a femme fatale and wild child. Tabloid followers expect them to hook up. It's not like the Proof of Life situation where many were put off by sweetheart Meg Ryan leaving Dennis Quaid for Russell Crowe.

In a celebrity-infested market, the hype surrounding a star-driven vehicle like Mr. and Mrs. Smith feeds on itself with the press and the public. Deleterious effects seem to occur from the exposure when irrelevant relationships become deafening, like with Charlie's Angels: Full Throttle—which became about supporting player Demi Moore dating the much younger Ashton Kutcher—and especially when the movies have intrinsically weak premises, like with the Tom Cruise-Nicole Kidman pairings Eyes Wide Shut and Far and Away. Gigli was always going to bomb regardless of Ben Affleck and Jennifer Lopez, because the romantic crime comedy genre itself is historically repellent.

Mr. and Mrs. Smith was a high concept blockbuster wannabe in a summer lacking such chops. No one appeared to be stretching commercial and artistic limits here, only the public's tolerance for overexposure—a coy game that Pitt, Jolie and company won for at least a weekend.

Speaking of celebrity press run amok, Cinderella Man's hopes for a leggy run received a left hook as the boxing drama went down 47 percent to $9.7 million in its second round, a steep decline compared to The Terminal and Seabiscuit among other recent summer dramas. After a disappointing first weekend, star Russell Crowe made headlines with his arrest in New York City for throwing a telephone at a hotel clerk and then publicly explaining his actions on The Late Show with David Letterman. The guy folks are supposed to be rooting for in Cinderella Man came off as a bully in real life, regardless of whatever late night mea culpa he made. However, the effect was likely negligible on Cinderella Man's box office ($34.6 million in 10 days). Even though people who see it seem to like it, the movie hasn't inspired the passion needed to take hold in theaters, and the marketing hasn't been rousing—it looks like a salad when audiences crave cheeseburgers.

It was business as usual for Madagascar, Star Wars: Episode III - Revenge of the Sith and The Longest Yard, holding the second, third and fourth spots for the weekend. With $332.1 million in 25 days, Revenge of the Sith stands as the 13th highest-grossing picture of all time and is on track to out-pull The Lord of the Rings: The Return of the King's $377 million to eventually rank seventh. Adjusting for ticket price inflation, however, puts Sith at No. 83 with an outside chance of cracking the all time top 50 by the end of its run.

Aside from Mr. and Mrs. Smith, none of the other openers popped out, including the 3-D Adventures of Shark Boy and Lava Girl. Ranking fifth for the weekend, Sin City and Spy Kids director Robert Rodriguez's kids movie erupted $12.6 million from 2,655 locations, a fraction of Spy Kids 3D: Game Over's debut two years ago. Moviegoers also didn't buy into Paramount's scheme to remake The Honeymooners with Cedric the Entertainer and crew. The comedy crash-landed in eighth place with $5.5 million at 1,912 theaters. Lions Gate's High Tension, a trimmed and dubbed version of a bloody French slasher picture, kneaded a mere $1.9 million out of 1,323 sites in 11th place.

Even Howl's Moving Castle, the latest animated feature from Spirited Away director Hayao Miyazaki, was unimpressive in its limited launch, delivering $427,987 from 36 venues. By comparison, Spirited Away bowed to $449,839 from 26 theaters in 2002, and, boosted by a wide release to capitalize on its Academy Award win for Best Animated Feature, closed with $10.1 million. Similar to Spirited Away, though, Howl's Moving Castle has grossed about $220 million overseas and was one of the top blockbusters in its native Japan. Distributor Buena Vista will roll the picture out to around 200 locations on June 17.