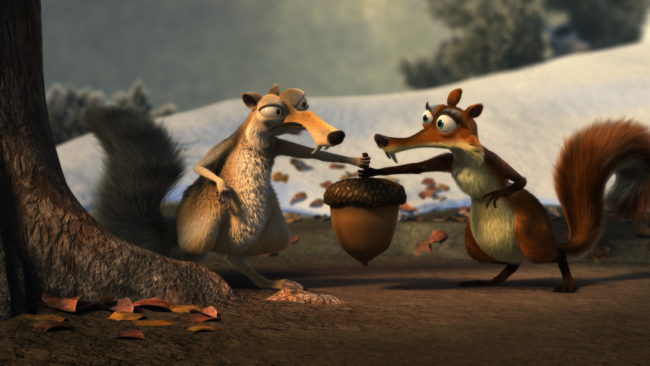 ‘Ice Age 3’ Climbs to Lofty Foreign Milestone
September 15, 2009 18:49 PDT - By Brandon Gray - Box Office News
On the foreign front, Ice Age: Dawn of the Dinosaurs has officially become the third highest-grossing movie of all time. The animated comedy edged out Harry Potter and the Sorcerer's Stone to rank behind Titanic and The Lord of the Rings: The Return of the King. Worldwide (which combines both foreign and domestic grosses), it currently stands at No. 18 on the all time chart, just shy of Finding Nemo, which it will soon surpass.

The third Ice Age has made over $667 million thus far, accounting for a whopping 77 percent of its $862 million worldwide total. That's the greatest foreign ratio for an American blockbuster on record, exceeding such foreign favorites as the Harry Potter and The Da Vinci Code movies.

Based on its domestic run, Dawn of the Dinosaurs may seem like an unlikely contender for any all time chart. Despite the ticket price boost of its 3D presentations, its domestic gross is under $195 million, which is slightly less than its predecessor, Ice Age: The Meltdown. In terms of attendance, it trails both The Meltdown and the first Ice Age, domestically.

However, while the Ice Age franchise hasn't grown domestically, foreign appreciation has surged over the years, beginning with The Meltdown. The first Ice Age generated around $207 million overseas, but The Meltdown leapt to a smashing $460 million. Dawn of the Dinosaurs has continued that progression, capitalizing on a variety of factors, from the franchise's universal slapstick and family appeal to its flexibility in being tailored for each market.

Dawn of the Dinosaurs' biggest foreign markets have been Germany and France, where it's No. 1 for the year with mammoth tallies of $78.7 million and $69.5 million, respectively. The United Kingdom is its third highest-grossing market at $56.7 million, ranking second for the year behind the latest Harry Potter. It's also the top movie of 2009 in Russia, Mexico, Brazil, Italy, Spain and other countries, though it hasn't translated nearly as well in Asia.