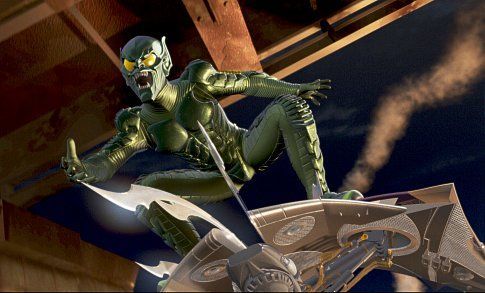 'Batman Begins' in the Shadows
June 20, 2005 14:13 PDT - By Brandon Gray - Box Office News
Riddled with the baggage of previous screen adaptations, the Dark Knight no longer amazes at the box office like Spider-Man.

The $150 million production marks the first Batman movie to bow on a Wednesday compared to the Friday June launches of the previous four. Its $72.9 million five-day gross tops Batman Forever's $66.3 million from 1995 as a franchise high but trails by 25 percent in terms of the number of tickets sold (due to ticket price inflation). Batman Begins' grosses include a simultaneous IMAX release, which broke the five-day opening record with an estimated $3.16 million at 55 venues.

"I think people love the character, and it's been eight years since the franchise unfortunately took a negative turn [with Batman and Robin]," Warner Bros.' head of distribution Dan Fellman told Box Office Mojo. "It took the vision of a filmmaker like Christopher Nolan to bring it back, with a great script and cast. We're well positioned moving forward with the summer. We're going to have a first week of $85 million, and [Batman and Robin] had $59 million. That's enough to bring Batman back for a sequel."

To resuscitate the franchise after the blow the infamous Batman and Robin dealt in 1997 (not to mention 2004's spin-off Catwoman), Warner Bros. turned to director Christopher Nolan (Memento) and crew. They eschewed the freak show sensibility of director Tim Burton's 1989 original and 1992 sequel, Batman Returns, and director Joel Schumacher's camp fantasias Batman Forever and Batman and Robin, and focused on the iconic hero, not the villains, with a more sober and philosophical interpretation. Pedigreed actors were cast, like Christian Bale as Batman and Michael Caine as Alfred, instead of a parade of vamping stars and buxom love interests.

The new approach led to a meditative marketing campaign that was light on dazzling action and effects. Sure, the trademark darkness was on display, but moments of levity and shots of the toys, like the new Batmobile, were muted or overwhelmed by the serious tone. This was in stark contrast to the original Batman, which had a trailer going back and forth between the spectacle and the one-liners (mostly from Jack Nicholson as The Joker).

Batman Begins' trailers, for the most part, stayed true to what the movie is—dramatic action for adults with comic book trappings. They were clear on Bruce Wayne's internal conflict but murky on the external threat Batman was fighting, and thus lacked the thrill of being a superhero that drew audiences to Spider-Man and the first Batman.

Moviegoers polled by CinemaScore gave Batman Begins an "A," while Fellman said it was rated the best of all the Batman movies in Warner Bros.' exit polling. The studio's surveys further indicated that 57 percent of moviegoers were male and 54 percent were over the age of 25. While stats like these are encouraging, they don't necessarily assure lasting appeal, as the makers of the fizzling Cinderella Man can attest after that picture's high audience marks, and Batman Begins, with its super-saturation release, is generally the kind of movie people rush to see, not discover down the road.

With overall weekend box office at $135.9 million, Batman couldn't rescue 2005 from its 17th straight down weekend from 2004—the comparable frame did $136.8 million. That's the longest year-to-year slump since 1985, the year that had the steepest attendance drop of the past few decades.

Batman Begins was never going to have the impact of the original Batman, which arrived in a boom year—1989 saw the biggest spike in attendance of any year from the mid 1970's to the present. In the month leading up to its release, the opening weekend record had already been broken twice, by Indiana Jones and the Last Crusade and Ghostbusters II, but Batman blew them all away. The $35 million picture soared to $40.5 million at 2,194 theaters—the first movie to make over $30 million in a single weekend. Adjusted for ticket price inflation, its opening equals about $65 million, and the final gross of $251.2 million would be over $400 million today.

Banking on a public perception of quality and indirect competition from next weekend's Herbie: Fully Loaded, Bewitched and Land of the Dead, Batman Begins hopes to defy current trends with a strong hold in its second weekend.

The weekend's other wide release, The Perfect Man, featuring Hilary Duff as a daughter meddling with her mother Heather Locklear's love life, made $5.3 million at 2,087 venues, a dull start comparable to Mandy Moore's How to Deal two summers ago.

Among holdovers, Mr. and Mrs. Smith is targeting the $100 million mark by its 11th day of release after a smaller second weekend drop than last summer's The Bourne Supremacy. Star Wars: Episode III - Revenge of the Sith climbed to No. 11 on the all time chart (unadjusted)—its $348.1 million haul surpassing The Lord of the Rings: The Two Towers and Finding Nemo—and is on track to top $380 million by the end of its run.