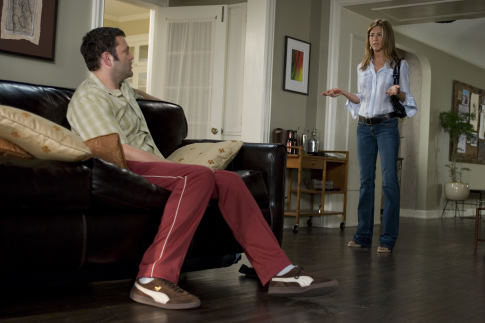 Windy City Rom-Com No Romp
June 1, 2006 16:50 PDT - By Scott Holleran - Movie Reviews
Vince Vaughn and Jennifer Aniston go to war in The Break-Up, which could have been a romantic romp and instead meets with more resistance than a February stroll along Chicago's Michigan Avenue when the wind kicks up. It is a struggle to survive this heavy stuff.

One wants to get into the groove with these two stars, who exude normal by virtue of not being a couple of freaks, and they are easy to root for. But normal quickly slips into bland, despite the presence of a colorful supporting cast and a gust of energy toward the end.

It's hard to tell what happened, but whatever The Break-Up is trying to express is lost in a script that can only be described as Swingers meets Friends laced with Edward Albee's Who's Afraid of Virginia Woolf?.

Meeting at Chicago's Wrigley Field during a Cub game, Aniston's Brooke and Vaughn's Gary are propelled into an opening credit montage that shows they date Chicago-style, begin a relationship and move in together. The picture is lightly dusted with Vaughn's grating, monotonous shtick at this point as Gary comes off as a big, smart-alecky lug.

The lug wants a pool table in the dining room and perky Brooke, who favors a dining table in the dining room, does not. And so it goes for about two hours. They fight over petty issues, break up, refuse to move out in a power struggle and both wind up looking slightly ridiculous as a pair of replicas of their past characters in a state of arrested development.

Aniston's Brooke fares better, since Gary is a complete jerk whose behavior shows no signs of life beyond whim worship, video games, beer and sports. Brooke works at an art gallery run by Judy Davis, hamming it up, and Brooke flirts with a stubbled stud customer played by Ivan Sergei, easily the better catch.

Other supporting players, like the script's funniest moments, are deployed in what amount to abbreviated comedy routines; they have little bearing on the story or the lead characters.

Besides Davis and Sergei, Jon Favreau, Jason Bateman, Peter Billingsley and John Michael Higgins—in the movie's funniest scene, as Brooke's brother singing prog-rock at the dinner table—do their best (Ann-Margret barely registers). Yet whatever momentum they build is squandered in the next War of the Roses hatefest moment.

Cosmetically, Aniston has more hair and costume changes than an art gallery girl could possibly afford, and Vaughn's puffy-faced paunch makes you want to buy him a cup of coffee.

A final sidewalk scene teases that the movie meant to convey that intimacy is presumed too soon in relationships—a good point and it's nicely made—but it breaks in like it's from another picture. The Break-Up, all about Brooke and Gary, cashing in on Vaughn and Aniston, forgets to furnish the audience with a relationship to break up.