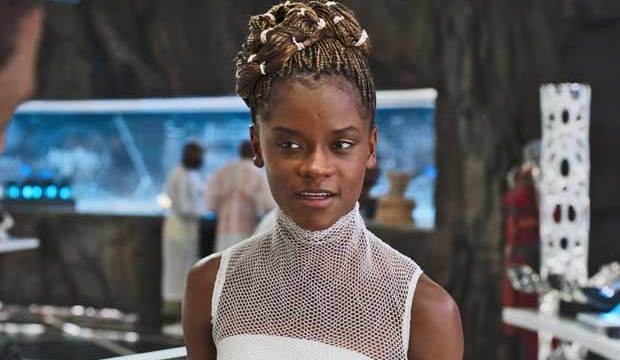 'Black Panther' Dominates Lackluster March at the Box Office
April 11, 2018 22:55 PDT - By Brad Brevet - Box Office News
Following a record-breaking February, which saw the February domestic box office top $1 billion for the first time ever, March saw a -24% decline compared to 2017 with calendar grosses totaling $891 million. One thing didn't change in March, however, and that was the #1 film as Black Panther not only dominated the month of February, but was also responsible for nearly 25% of March's overall gross. In fact, thanks to Black Panther, even though March was such a down month, the first quarter of the year finished down just -2% compared to 2017's record $2.91 billion, with Black Panther accounting for almost 23% of the quarter's overall $2.85 billion in grosses. It's the second largest percentage behind March of 1998 when Titanic accounted for over 25% of the month's overall gross.

Therefore, it comes as no surprise Disney led the month with five films grossing over $304 million collectively, with Black Panther accounting for 72% of the studio's March gross. The film's domestic cume reached $647.8 million by the end of the month and has since surpassed $667 million, passing Titanic to become the third highest grossing domestic release of all-time. The majority of the rest of the studio's March gross came from the release of A Wrinkle in Time, which didn't deliver the grosses many anticipated, debuting with a soft $33.1 million and is unlikely to reach $100 million domestically. All told, Disney continued its dominance of the 2018 box office as its gross for the year finished the month at $866.3 million, more than $475 million ahead of Sony in second place.

Warner Bros. brought in over $139 million from eight films in March, placing second for the month. Leading the studio's stable of films was the March 16 release of Tomb Raider, which brought in just shy of $50 million for the month. While the video game adaptation has managed to pull in decent international figures, grossing nearly $265 million so far, this is hardly the domestic performance that was expected when the $94 million production was greenlit. The more impressive performance for the studio is the continued strong performance of Game Night, which debuted at the end of February and brought in nearly $43 million in March alone. Budgeted at a reported $37 million, the R-rated comedy has since generated nearly $68 million domestically and over $106 million worldwide.

WB also launched Ready Player One over the final three days of the month where it brought in $42.5 million after debuting on a Thursday. The film has since pushed its domestic total over $100 million and a worldwide cume approaching $400 million. A variety of budgets have been reported for the Steven Spielberg-directed film, though most seem to agree on $175 million in production costs before marketing.

Fox finished the month in third, bringing in $91.5 million in March, led by their early March release of Red Sparrow, topping the seven films the studio had in release with $45.4 million. Sparrow has since topped $46 million domestically on a $69 million budget, pushing toward a soft $140 million worldwide. The studio's mid-March release of Love, Simon debuted with $11.7 million and has since doubled its $17 million production budget domestically, bringing in over $37 million.

Sony landed in fourth with $61 million for the month, over 50% of which came from the early February release of Peter Rabbit. The live-action/animated hybrid opened on February 9 and has quietly brought in over $113 million domestically and $275 million worldwide on a $50 million production budget. The studio's lone March release was Paul, Apostle of Christ, which opened ahead of Easter weekend with $5.1 million and has since pushed its domestic cume over $15 million on a $5 million budget.

In surprise fashion, rounding out the top five is Roadside Attractions, which had four films in release but it was the faith-based feature I Can Only Imagine that accounted for more than 98% of the studio's $53.1 million in March. After opening with an impressive $17.1 million from just 1,629 theaters on March 16, the film has since gone on to gross over $70 million at the domestic box office on a $7 million budget. I Can Only Imagine is far and away the studio's highest grossing domestic release of all-time, well ahead of the $47.69 million brought in by Manchester by the Sea in 2016.

As a result, Universal and Paramount fall to sixth and seventh place respectively as the two studios didn't gain much ground from the disappointing March releases of Pacific Rim Uprising and Sherlock Gnomes.

Looking ahead, ten days in and April is already -2.4% behind last year, but there have already been two solid debuts. Topping the box office this past weekend was the excellent, $50 million opening for A Quiet Place, along with the solid $20.5 million opening for the R-rated comedy, Blockers. This coming weekend sees the release of Dwayne Johnson's Rampage, a reported $120 million video game adaptation currently tracking to debut with $35-40 million and Blumhouse will debut their latest micro-budgeted feature, Truth or Dare, hoping it can make a little noise of its own alongside A Quiet Place.

Otherwise, the rest of April is mostly a matter of waiting for Avengers: Infinity War to hit theaters. The online ticket retailer Fandango.com reported just this morning that the culmination of all that has taken place in the Marvel Cinematic Universe thus far is, shocker, something fans are ready to turn out for. Fandango reports the film has so far sold twice as many tickets as Black Panther at the same point in the sales cycle and is actually outselling the last seven Marvel Cinematic Universe titles combined. What this may mean for the film's opening is yet to be seen, but a report such as this certainly hints at the possibility of a record-breaking opening weekend and what comes after that is a question of just how long it can sustain its run.

The average multiplier for a film in the Marvel Cinematic Universe is 2.75. This includes Black Panther, which currently has a 3.3x multiplier (and climbing), second to Guardians of the Galaxy, which enjoyed a 3.53x multiple after its $94.3 million debut in 2014. The Avengers still enjoys the MCU's largest opening at $207.4 million, after which it had a 3.01x multiplier, finishing its run with $623.4 million, but Avengers: Age of Ultron and Captain America: Civil War could only muster 2.4x and 2.28x multiples following their opening weekends. Of course, Infinity War is a completely different beast and should it be able to threaten the all-time best opening weekend it will be quite the journey watching its theatrical run.

Finally, a list of selected films that closed out their domestic runs in March is featured below, ordered by cumulative gross.

For a complete look at March's box office results, find calendar grosses here and grosses for all of the month's new releases here.