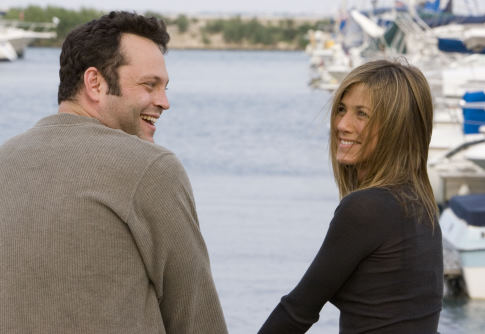 The Break-Up attracted $39.2 million at 3,070 locations, the third highest-grossing start ever for its genre behind Hitch and 50 First Dates. Universal Pictures' $52 million romantic comedy marked personal bests for lead actors Vince Vaughn and Jennifer Aniston in starring roles. The last romantic comedy, Failure to Launch, also bowled over the industry when it debuted to $24.4 million in March.

"I'm just so happy about The Break-Up," said Nikki Rocco, Universal's president of distribution. "I think everyone in the industry, based on the tracking, expected it to be $25 million to $30 million. But if you take a look at the lineup of films that have been doing business, there's nothing like it. We've been very successful with Jennifer Aniston before, with Bruce Almighty and Along Came Polly. You put her in the right vehicle and she's a draw. I think the public genuinely likes her and Vince Vaughn."

Women made up two thirds of The Break-Up's audience, according to Universal's exit polling, while half of moviegoers were over 30 years old. The "humor" was the most cited reason respondents gave for seeing the picture, with Miss Aniston and Mr. Vaughn not far behind.

The industry frequently is surprised by the success of romantic comedies yet doesn't churn them out at the same rate as other genres, like horror or action. That leaves the field wide open for the few high profile romantic comedies, like this year's The Break-Up and Failure to Launch, to clean up.

The Break-Up's premise was not original but it was relatable, from the petty bickering to the battle of the sexes angle that has driven past hits like Mr. & Mrs. Smith and How to Lose a Guy in 10 Days. What's more, it had the personalities and humor to bring it home. Mr. Vaughn has cultivated a movie image as a verbose guy's guy, giving voice to men's often immature wants through pictures like Wedding Crashers and Old School. Though her popularity has been underrated due to inconsistent movie choices, Miss Aniston has consistently projected normalcy and likeability, especially as a foil to annoying or oddball characters onscreen.

The marketing may have highlighted the humor, but the picture's called The Break-Up, not The Make-Up, and it isn't a romp, heaping on some drama with the laughs. Whether audiences are disappointed that it's not entirely frothy or are pleasantly surprised that it has a little heft should be revealed in the weeks to come.

Suggesting that fans rushed to see it as soon as possible, X-Men: The Last Stand devolved 67 percent to $34 million, the steepest post-Memorial Day opening drop on record. In 10 days, though, the costly Marvel Comics adaptation climbed to $175.3 million, a figure that X2: X-Men United took 18 days to reach.

Over the Hedge eased 24 percent to $20.6 million in its third weekend, a stronger post-Memorial Day hold than DreamWorks' past hits Madagascar or the two Shreks, although its grosses are lower. The 17-day tally stands at $112.4 million, and the computer-animated comedy will face significant competition from Cars next weekend.

The Da Vinci Code leveled off with $18.6 million, down 45 percent for a $172 million total in 17 days. The thriller's most impressive success, though, is at the foreign box office, where it's No. 1 for a third week and has blazed past the $400 million mark, a milestone only 20 other pictures have reached in history.

In limited release, An Inconvenient Truth gathered $1.4 million at 77 theaters, averaging a solid $17,615 per site. With $1.9 million in the till, Paramount Classics' environmentalist tract featuring former Vice President Al Gore is scheduled for about 150 theaters next weekend followed by a major expansion on June 16 into over 450.

NOTE: This report was originally written on Sunday, June 4 and was revised on Monday, June 6 with actual grosses.