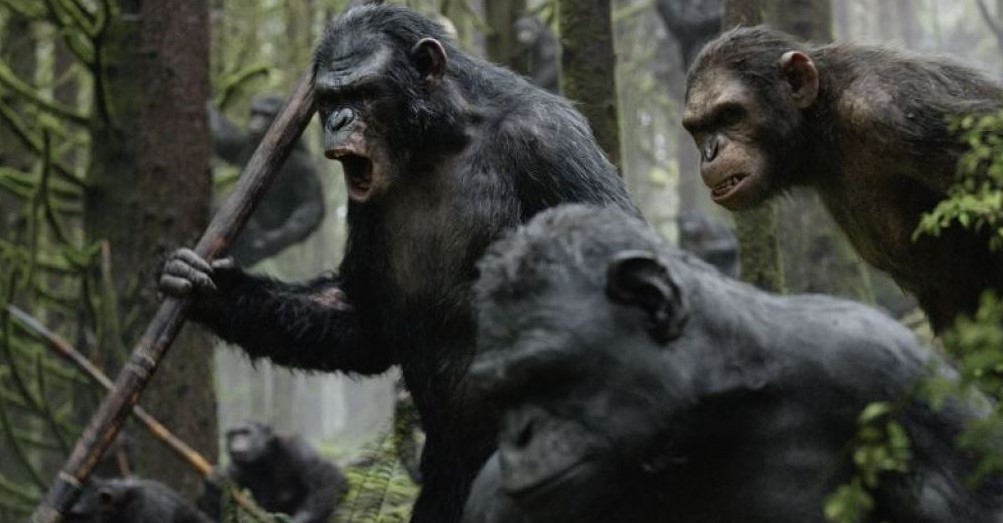 Weekend Report: 'Apes' Rules Again
July 20, 2014 13:24 PDT - By Ray Subers - Box Office News
On strong word-of-mouth, Dawn of the Planet of the Apes held the top spot for the second weekend in a row. Among the new releases, The Purge: Anarchy put up solid business in second place, while Planes: Fire & Rescue missed the mark and Sex Tape flopped.

The Top 12 earned $134.9 million this weekend. That's off 26 percent from the same frame last year; overall, July box office is down over 30 percent year-to-year.

That strong hold can be attributed to positive reviews and word-of-mouth, and unimpressive competition from this weekend's newcomers. Overall, the Apes sequel has earned $139.2 million, and could wind up over $230 million by the end of its run.

The Purge: Anarchy opened in second place with $29.8 million, which is down 13 percent from the first Purge's $34.1 million debut. That's actually an impressive retention rate, given the fact that the first movie burned out quickly on horrible word-of-mouth. Chalk this up to a strong marketing effort from Universal that promised The Purge: Anarchy would actually explore what it's like to be stuck outside during the lawless 12-hour period known as "The Purge."

According to Universal, the movie's audience was 52 female and 61 percent under the age of 25. They gave it a solid "B" CinemaScore, which is a major step up from the last movie's "C" score. Ultimately, The Purge: Anarchy could exceed the first movie's $64.5 million total.

Planes: Fire & Rescue took third place with $17.5 million. That's off 21 percent from the first Planes, which opened to $22 million last August. It's also lower than Turbo's $21.3 million start on the same weekend last year (and that was after burning off demand on Wednesday and Thursday).

Drafting off the immensely popular Cars franchise, the first Planes did fine business last year. Less than a year later, Fire & Rescue felt less like a movie set within the world of Cars and more like a direct-to-DVD spin-off (which is what the first Planes was supposed to be). The movie's disappointing performance is still somewhat surprising, though, given the lack of fresh content for family audiences: as has often been the case this Summer, this result reinforces the notion that filling a quota (in this case, family-friendly entertainment) isn't enough to guarantee attendance.

A whopping 42 percent of the movie's audience was 12 years of age and under. With an "A" CinemaScore and zero competition for this audience for the remainder of the Summer, expect Fire & Rescue to close with around $70 million.

Sex Tape limped in to fourth place this weekend with a weak $14.6 million. That's over $10 million lower than Cameron Diaz's The Other Woman ($24.8 million), and is less than half of Bad Teacher's $31.6 million debut. Compared to Summer 2014 comedies, it also looks pretty poor: it debuted lower than A Million Ways to Die in the West ($16.8 million), and only a bit higher than Adam Sandler's Blended ($14.3 million).

The movie had likeable leads and a solid premise, but advertisements lacked the kind of humor that's needed to open an R-rated comedy. It probably also fell victim to some truly abysmal reviews (around 20 percent on Rotten Tomatoes). With poor word-of-mouth ("C+" CinemaScore), Sex Tape is going to fall off quickly, and it could wind up earning less than $45 million total.

Transformers: Age of Extinction rounded out the Top Five with $9.8 million, which is off just 40 percent from last weekend. To date, the fourth installment in the franchise has earned $227 million, and will become the biggest movie of the Summer in a matter of days. Overall, Transformers remains on track for around $250 million total.

Richard Linklater's Boyhood expanded to 33 theaters and earned $1.17 million this weekend. That translates to a fantastic $34,418 per-theater average. Distributor IFC Films plans to expand the critically-acclaimed movie in to at least 40 more theaters next weekend.

Political thriller Persecuted opened in 736 theaters, but couldn't crack $1 million. Meanwhile, Zach Braff's Wish I Was Here got off to a slow start with $484,401 from 68 theaters. The writer/director/star's follow-up to Garden State will expand to around 600 theaters next weekend.

For the fourth weekend in a row, Transformers: Age of Extinction ruled the foreign box office. The international sensation added $81.2 million for a new total of $659.1 million (17th all-time).

Including previews, Age of Extinction opened to $16.5 million in Brazil; that's already more than any of the previous installments earned there throughout their entire runs. It also scored the biggest debut of the year in Germany ($11.9 million), and put up solid numbers in France ($8.8 million) and Italy ($5 million) as well. Meanwhile, it added $9.6 million in China, which brought its record-breaking total to $285.7 million.

Transformers: Age of Extinction has now earned $886 million worldwide. The movie is guaranteed to earn over $1 billion total, and it could even get there before it expands in to Japan and Spain next month.

Playing in 49 markets, Dawn of the Planet of the Apes earned $60.5 million this weekend. It opened to $14.6 million in the U.K., which is a 47 percent improvement over its predecessor. Meanwhile, it opened to $9.8 million in Russia—more than double Rise's debut—and $4.6 million in Spain. The movie has already earned $101.5 million overseas, and expands in to another 17 territories (including Mexico and Brazil) next weekend.

How to Train Your Dragon 2 added $14 million for a new total of $223.9 million. It reaches Germany and Austria next weekend, and will pass the first movie's $277 million total sometime in August.

Planes: Fire & Rescue opened in 24 markets and earned $9 million this weekend. Its biggest markets were Mexico ($1.8 million) and Brazil ($1.5 million).

A few weeks ahead of its U.S. release, Step Up: All In opened to $8.2 million overseas. It earned $3.1 million in Russia and $2.1 million in France. The fifth installment in the dance movie franchise reaches domestic theaters on August 8th.