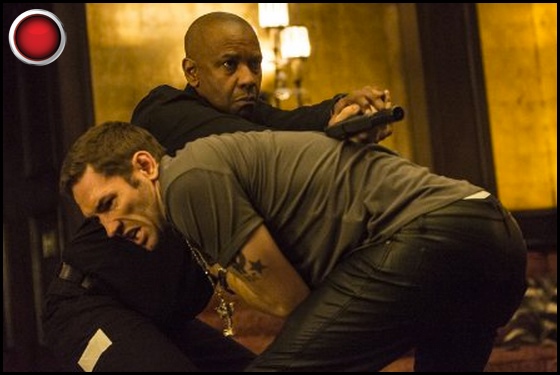 Meanwhile, The Boxtrolls had an above-average debut for a stop-motion animated movie, though it still wound up slightly behind The Maze Runner's second weekend.

Playing at 3,236 theaters, The Equalizer opened to $34.1 million this weekend. That ranks fourth all-time in September behind Hotel Transylvania, Insidious Chapter 2 and Sweet Home Alabama. Among Denzel's movies, The Equalizer's debut ranks third behind American Gangster and Safe House.

Lots of factors contributed to this strong debut—a well-managed marketing effort, outreach to Eminem's massive fanbase, etc.—though the real key to the movie's success is the name above the title. Denzel Washington is one of the few bonafide movie stars at the domestic box office; excluding The Great Debaters (in which he played a supporting role), The Equalizer is the 12th-straight Denzel movie to open north of $20 million. Ten of those 12 are rated R, which makes this accomplishment even more impressive.

As a retired intelligence officer exacting vengeance on some Russian gangsters, Denzel's role in The Equalizer fit perfectly in to the butt-kicking brand he's been cultivating over the past decade. His legion of fans rushed out to see the movie, and seem to be generally pleased with the results: the movie garnered an "A-" CinemaScore, which suggests good word-of-mouth.

The movie's audience was split evenly between men (52 percent) and women, and skewed older (65 percent over the age of 30). Add in the positive responses the movie has been receiving, and this will almost certainly play well in the coming weeks. A final tally north of $100 million is likely.

In second place, The Maze Runner added $17.4 million for a 10-day total of $58 million. That's a 46 percent drop from opening weekend, which is fairly strong for the young-adult genre; in comparison, Divergent fell 53 percent earlier this year. Based on this weekend's results, The Maze Runner now appears on track for $95 to $105 million total.

Opening at 3,464 theaters, The Boxtrolls scored $17.3 million this weekend. That's above past Laika Animation titles Coraline ($16.8 million) and ParaNorman ($14.1 million). In fact, it's the biggest opening for a stop-motion animation movie since Tim Burton's Corpse Bride, which set the genre's record nine years ago. Chalk this solid start up to Laika's strong reputation and a pervasive marketing effort from Focus Features.

The movie received a "B+" CinemaScore from an audience that skewed female (57 percent). Ultimately, The Boxtrolls could earn over $60 million total.

In seventh place, A Walk Among the Tombstones plummeted 67 percent to $4.2 million this weekend. This rough drop can be attributed to tough competition from The Equalizer, along with mixed word-of-mouth coming off opening weekend. To date, Tombstones has earned $20.8 million, and could fall short of $30 million total.

Guardians of the Galaxy has now earned $319.2 million at the domestic box office; on Sunday, it passed the first Iron Man movie to move up to third place in the Marvel Cinematic Universe (behind The Avengers and Iron Man 3).

The Skeleton Twins expanded to 385 theaters and grossed $1.23 million this weekend. So far, the Bill Hader/Kristen Wiig drama has grossed $2.32 million.

In limited release, Pride opened to $81,971 from six theaters. That translates in to a decent $13,662 per-theater average. The well-reviewed movie will expand in to more cities on October 10th.

The Maze Runner held on to first place at the overseas box office with $27.2 million. Without opening in any major markets, the movie still only fell 27 percent from last weekend.

The movie's biggest holdover markets were South Korea ($5 million, down nine percent) and Australia ($2.7 million, down 18 percent). It's already Fox's third-highest-grossing movie all-time in Malaysia behind Avatar and X-Men: Days of Future Past. To date, The Maze Runner has earned $90.7 million overseas, and has openings in China, France, Germany, Italy and the U.K. coming up in October.

Coinciding with its domestic debut, The Equalizer scored $17.8 million overseas this weekend. It earned $2.9 million in the U.K., $2.7 million in Russia (best all-time for Denzel), $1.4 million in Mexico and $1.3 million in Brazil.

Lucy extended its remarkable run this weekend, adding $11.1 million for a $269.1 million total. It opened in first place in Italy with an impressive $3.2 million. By Thursday or Friday, Lucy will have passed $400 million worldwide.

This Weekend in Past Years