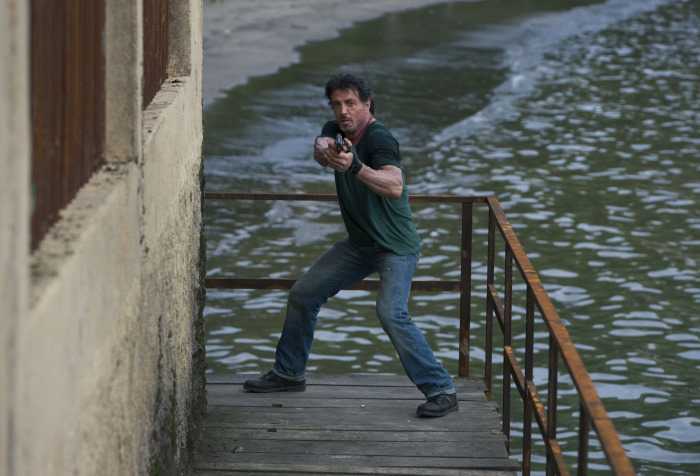 Weekend Report: 'Expendables' Pump Up, 'Eat Pray Love' Pigs Out, 'Scott Pilgrim' Powers Down
August 16, 2010 14:55 PDT - By Brandon Gray - Box Office News
The Expendables muscled in to the top spot over the weekend, and Eat Pray Love was consumed by many, but it was nearly game over for Scott Pilgrim vs. the World. Overall business was on par with the same weekend last year, when District 9 led, though attendance was middling for the time of year.

Claiming a burly $34.8 million on approximately 4,300 screens at 3,270 locations, The Expendables' opening weekend was a bit less than Inglourious Basterds' $38.1 million last August, but it was greater than The A-Team's $25.7 million and Rambo's $18.2 million. It also was the highest-grossing debut of Sylvester Stallone's career, although not in terms of attendance. The Expendables was sold as a teaming of Mr. Stallone with other 1980s actors (including Bruce Willis and Arnold Schwarzenegger in cameos, who were pumped up beyond their roles in ads) and more contemporary action stars (Jason Statham, Jet Li) and as a fun, '80s-style action movie. Distributor Lionsgate's exit polling indicated that 61 percent of Expendables' audience was male (slightly more than Basterds) and 60 percent was 25 years and older (younger than Basterds).

Eat Pray Love collected $23.1 million on close to 3,700 screens at 3,082 locations, which topped Julie & Julia's $20 million first weekend last August. It also marked Julia Roberts' biggest launch in a top-billed role since America's Sweethearts in 2001. After nearly a decade of artsier fare and ensemble work, Ms. Roberts finally restored her smile and batted in her romantic/relationship comedy wheelhouse with Eat Pray Love, like Valentine's Day earlier this year. Distributor Sony Pictures reported that 72 percent of the audience was female and 56 percent was 35 years and older, and the studio noted that 28 percent of moviegoers were 17-to-29-years-old.

Scott Pilgrim scored a modest $10.6 million on around 3,000 screens at 2,818 locations, which was less than Nick and Norah's Infinite Playlist's $11.3 million opening weekend. It also paled compared to the launches of Kick-Ass ($19.8 million) and Zombieland ($24.7 million), among recent fan boy affairs. Buzz from the Comic-Con crowd and the media may have created unrealistic expectations, but Scott Pilgrim was always going to be a tough sell for the mainstream, given its niche premise and genre-bending. The movie's poster, featuring Michael Cera posing with his bass guitar, didn't help, failing to explain the movie and making it seem like a rock 'n' roll comedy, which is an unpopular sub-genre. Distributor Universal Pictures' research showed that 64 percent of the audience was male and 58 percent was under 25 years old.

Last weekend's top grosser, The Other Guys, retreated 51 percent to $17.4 million for a $70 million total in ten days. Its drop was steeper than Step Brothers at the same point, though it was about the same as Anchorman: The Legend of Ron Burgundy. Inception continued to hold relatively well, down 39 percent to $11.3 million. With a $248.5 million tally in 31 days, it surpassed Shrek Forever After to become the fifth highest-grossing movie from 2010.

Step Up 3-D plunged 56 percent to $6.9 million, further trailing its predecessors with a $29.8 million ten-day sum. Again, 80 percent of its business came from 3D presentations. Despicable Me had the smallest drop among nationwide holdovers, easing 25 percent to $7 million. That lifted its total to a mighty $222.2 million in 38 days, topping How to Train Your Dragon.

Salt reprised its steady, typical decline, falling 43 percent to $6.2 million, and it crossed the $100 million mark on its 23rd day, becoming star Angelina Jolie's fourth vehicle to reach that level. Meanwhile, Dinner for Schmucks leveled off somewhat, dipping 39 percent to $6.3 million and upping its sum to $58.8 million in 17 days.

In milestone news, Toy Story 3's total passed $400 million on Saturday, its 58th day of release. It's the 11th movie in history to hit that mark, and its the second highest-grossing animated movie, behind Shrek 2, which took 43 days to reach $400 million.

• 'Other Guys' Arrests Audiences, 'Step Up' Gets Served, 'Inception' Lingers