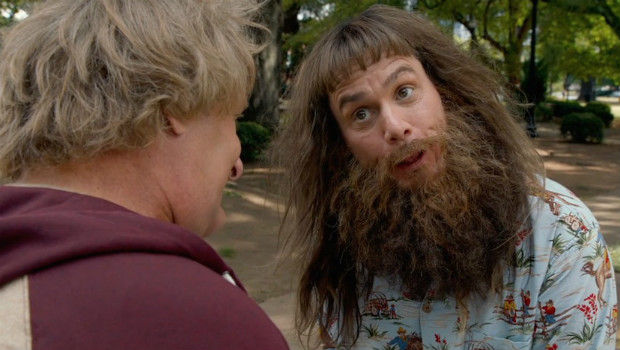 Long-awaited sequel Dumb and Dumber To opened to $36.1 million, which was enough to take first place away from strong holdover Big Hero 6.

The Top 12 earned $129.6 million this weekend, which is up nine percent from the same weekend last year.

Dumb and Dumber To's $36.1 million is the biggest live-action debut for Jim Carrey since 2003's Bruce Almighty, and is also the best opening ever for the Farrelly Brothers. Among recent comparable titles, it's a bit lower than the five-day openings for Anchorman 2: The Legend Continues ($39.5 million) and We're the Millers ($37.9 million), and is a step above recent road trip comedies Jackass Presents: Bad Grandpa ($32.1 million) and Identity Thief ($32.1 million).

The original Dumb and Dumber was a massive box office hit back in 1994, and developed legions of fans on home video as well. Two decades later, Universal sold the sequel by essentially conveying that the original pair (Carrey and Jeff Daniels) was back, and that their characters were dumber than ever. This fairly straightforward strategy proved to be very effective.

The audience for Dumb and Dumber To was 55 percent male and 57 percent over the age of 25. They weren't necessarily thrilled with the movie, though, and awarded it a weak "B-" CinemaScore. Add in terrible reviews and tough competition from The Hunger Games: Mockingjay Part 1 and Horrible Bosses 2, and this could fall off quickly in the next few weeks. Still, look for Dumb and Dumber To to wind up close to $100 million.

This is the seventh first place debut for Universal Pictures this year, following Lone Survivor, Ride Along, Non-Stop, Neighbors, Lucy and Ouija. Fox is the only other studio with seven first place openings in 2014.

Big Hero 6 eased 38 percent to $34.7 million. That drop is a bit steeper than Wreck-It Ralph's 33 percent, and is roughly on par with Megamind's 37 percent. The Disney Animation hit has now earned $110.3 million; if it holds up decently against the one-two punch of Mockingjay and Penguins of Madagascar, it could eventually get to $200 million.

Interstellar added $28.3 million, which was off 40 percent from last weekend. That hold isn't quite as good as Inception's 32 percent drop, though it's still very strong for a big-budget movie like this. IMAX contributed $7.4 million, or 25 percent of the overall weekend gross. To date, Interstellar has earned $96.9 million, and is on track to close with at least $160 million.

In a distant fourth place, Beyond the Lights opened to $6.2 million from 1,789 locations. That's below director Gina Prince-Bythewood's first two movies, Love & Basketball ($8.1 million) and The Secret Life of Bees ($10.5 million).

The audience for Beyond the Lights was 61 percent female, 55 percent over the age of 25, and 49 percent African American. With an "A" CinemaScore and strong reviews, it could hold up well in the coming weeks, though it would be shocking if it came anywhere close to $20 million.

Gone Girl rounded out the Top Five with $4.56 million. It was off a light 27 percent, which makes this the third weekend in a row in which the movie dropped less than 30 percent. To date, Gone Girl has earned a fantastic $152.6 million, and appears on track to close north of $170 million.

Jon Stewart's directorial debut Rosewater earned $1.15 million at 371 locations this weekend. That solid start can be attributed to the strong connection Stewart has with his fan base, who were well aware of this movie thanks to the attention it has received on his nightly Comedy Central show.

Kirk Cameron's Saving Christmas opened to $992,087 million at 410 locations. That translates to a weak $2,420 per-theater average; in comparison, Cameron's Fireproof averaged $8,148 at twice as many locations back in 2008.

The Theory of Everything expanded to 41 locations and earned $735,947 this weekend. That's an impressive $17,937 per-theater average, which bodes well for the movie's long-term prospects. The Stephen Hawking biopic will be playing in at least 135 theaters next weekend.

Whiplash got a big push this weekend, jumping from 88 to 419 theaters. Unfortunately, the movie continues to struggle to find an audience: it earned a modest $719,740, which translates to 1,718 per-theater. Whiplash has now grossed $2.4 million total, and will need major awards recognition to get close to $10 million.

On its ninth weekend, The Maze Runner passed $100 million at the domestic box office. The movie has now earned over $330 million worldwide off of a $34 million budget; the sequel, The Maze Runner: Scorch Trials, is scheduled to open next September.

Playing at six locations in New York and Los Angeles, Foxcatcher opened $270,877 this weekend. That translates to a per-theater average of $45,146, which is a slight step up from The Theory of Everything's $41,753 average across essentially the same theaters last weekend. The movie will gradually expand over the next month or two, but will likely hold off on a nationwide release until after Oscar nominations in January.

• Moviegoers to Get 'Dumber' Again This Weekend

This Weekend in Past Years