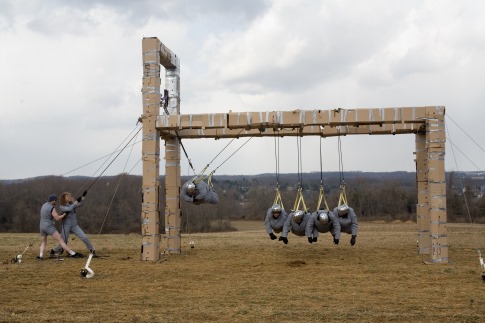 'Jackass' Slams Into Top Spot
September 25, 2006 17:58 PDT - By Brandon Gray - Box Office News
The stunted box office had a befitting No. 1 in Jackass: Number Two, an extension of the MTV show that follows a group of men who conduct extreme scatological pranks and stunts, eschewing plot or point to epitomize mindless entertainment. It's the first picture to open well north of $20 million since Talladega Nights in early August.

Along with a decent debut from Jet Li's Fearless and with little help from Flyboys and All the King's Men, overall business surged beyond the previous two slow weeks but was down two percent from the same frame last year, when Flightplan and Tim Burton's Corpse Bride led.

Jackass: Number Two extracted $29 million from 3,900 screens at 3,059 theaters. On its first day alone, Paramount Pictures and MTV Films' sequel matched its $11.5 million production budget, and its opening weekend beat predecessor Jackass: The Movie's $22.7 million, a surprise hit in 2002 that grossed $64.3 million by the end of its run.

According to Paramount's exit polling, 70 percent of Jackass: Number Two's audience was under 25 years old and 65 percent was male. The overall grade from moviegoer pollster CinemaScore was "B+," although those in the target 18-to-24 age range gave it an "A."

Toffler described the appeal of Jackass as "The Three Stooges on steroids." "I think it's about the fun camaraderie of the principals," he noted. "It's not mean spirited. They write these gags and try to top themselves. They really get off on each other." Added Harris: "Johnny Knoxville and his antics have hit a chord with kids today. He's one of them–it's anything goes, 'we'll try anything,' 'we'll live through these pranks.'"

Flyboys was grounded at $6 million from 2,033 locations. The World War I action drama was independently produced for $60 million with MGM serving as distributor, and the marketing mostly conveyed computer-enhanced aerial fights without context—whereas Jackass gets away with sheer spectacle due to its fan base and the lure of real stunts, Flyboys, with its obscure subject matter, required more for lift off. MGM's research indicated that 59 percent of the audience was male and 73 percent was over 30.

While Flyboys failed, All the King's Men flopped with $3.7 million at 1,514 sites. Ads for the $55 million period political drama touted bromides and the award-winning cast, including Sean Penn and Anthony Hopkins, but little else. The turnout was 53 percent female and 75 percent over 35, according to distributor Sony.

On Saturday, MGM conducted what may have been the widest set of sneak previews on record for School for Scoundrels, which opens next weekend at around 3,000 theaters. The Weinstein Company-produced comedy featuring Billy Bob Thornton and Jon Heder sneaked at 1,500 locations and played to 63 percent capacity. MGM's research pegged the demographics at 51 percent male and 70 percent under 25.

NOTE: This report was originally written on Sunday, Sept. 24 and was revised on Monday, Sept. 25 with actual grosses.