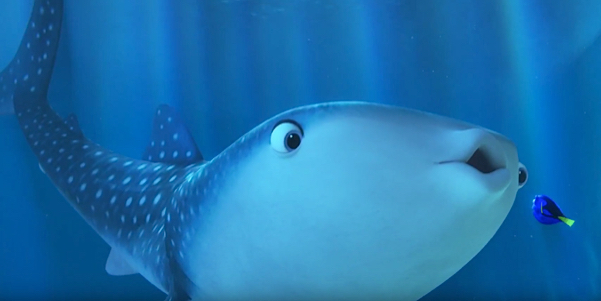 'Dory' Threepeats Over Holiday Weekend; 'Tarzan' and 'Purge 3' Open Well Above Expectations
July 3, 2016 16:54 PDT - By Brad Brevet - Box Office News
MONDAY AM UPDATE: Finding Dory is expected to finish the four-day holiday weekend with an estimated $50.19 million bringing the film's domestic cume to $380.5 million, just a hair below Finding Nemo for fifth place on the all-time highest grossing animated features list. That said, it won't be long before Dory no only surpasses Nemo, but it will soon top the $415 million brought in by Toy Story 3 to become the highest grossing Pixar feature ever.

You can browse all the four-day estimates right here and check out yesterday's complete weekend report below. We'll have weekend actuals for you on Tuesday afternoon.

WEEKEND REPORT: Another weekend in release and another weekend on top of the box office for Pixar's Finding Dory. However, while the forgetful little fish enjoys its third weekend in the number one spot, it had stiffer competition than expected from one of the weekend's newcomers. Finishing strong in second position was WB's The Legend of Tarzan while Universal's The Purge: Election Year also over-performed, tripling its budget in its first three days of release. Meanwhile, Disney's The BFG couldn't find much of an audience as it finished in fourth position. Nevertheless, the top twelve films for this 27th weekend of the year saw a 41% uptick compared to last year as films are taking advantage of the Fourth of July, holiday weekend.

Finding Dory brought in an estimated $41.9 million for the three-day weekend and is tracking toward a four day around $51 million. As of now the film's domestic cume stands at just over $372 million and should top $380 million by the end of Monday, most likely topping its predecessor, Finding Nemo, as the fifth highest grossing animated release of all-time. Internationally, Dory added an estimated $34.4 million this weekend bringing its global cume to just over $538 million.

Next we come to Legend of Tarzan, which finished in second position with an estimated $38.1 million three-day opening, decimating Mojo's weekend forecast and much higher than industry expectations. As of now the film is looking at a four-day around $43+ million, nearly $20 million more than Mojo's projections. Given the film's $180 million budget, however, it's going to need some help over the coming weeks, and internationally, to justify such a massive spend. That said, working in the film's favor is an "A-" CinemaScore with moviegoers under the age of 18 scoring it an A+. The audience breakdown was 49% male vs 51% female and 55% over the age of 35.

Looking ahead and comparing to other July releases opening in the same range, Tarzan's opening is just a shade above the $37.2 million opening for Pacific Rim three years ago and just a bit below the $40.3 million opening for The Last Airbender. Pacific Rim went on to gross just over $101 million while Airbender totaled over $131 million. Given the audience score and opening it would stand to reason Tarzan could pop a bit higher than both films, but could it possibly reach $150 million domestically?

Internationally, Tarzan delivered an estimated $18.8 million from 19 markets for a $56.9 million global opening. It brought in $4 million in Korea and in Russia it finished #1 with an estimated $3 million. Next weekend it expands further into the UK, France (Jul 6), Australia (Jul 7) and Mexico (Jul 8).

Coming in third is Universal's The Purge: Election Year with a very strong $30.8 million three-day, heading toward a four-day weekend that could top $35 million. The three-day performance is just a hair over the $29.8 million brought in by The Purge: Anarchy two years ago as the franchise is showing zero signs of decay now that it has three films under its belt. Given the $10 million production budget and the fact Election Year scored the highest CinemaScore of all three Purge films it almost goes without saying a fourth film is likely in the works.

Internationally, The BFG opened in Russia and Australia this weekend where it brought in an estimated $3.9 million. Next weekend the film will open in New Zealand and Thailand followed by Brazil in late July, Korea and Mexico in August and Japan in September.

Coming in just outside the top five is the Dwayne Johnson and Kevin Hart action/comedy Central Intelligence with an estimated $12.5 million for the three-day and $15 million for the four-day holiday. The film's domestic cume is now just shy of $95 million as it had the best weekend holdover in the top ten, dipping only 31.4% for the three-day. This is now Kevin Hart's third highest grossing domestic release of all-time behind Ride Along, which grossed nearly $135 million back in 2014, and the ensemble comedy Scary Movie 3 ($110 million).

As for the weekend's limited releases, freshman titles begin with Roadside's Our Kind of Traitor, which was the widest of the lot, opening in 373 theaters and bringing in an estimated $1 million ($2,685 PTA). Music Box released The Innocents into three theaters where it brought in a strong, $31,500 for a $10,500 PTA and The Orchard's Life, Animated brought in an estimated $26,547 from three theaters for a $8,849 per theater average.

Next weekend sees the release of Illumination's The Secret Life of Pets, arriving in over 4,100 theaters, along with the R-rated comedy Mike and Dave Need Wedding Dates starring Zac Efron, Anna Kendrick, Adam DeVine and Aubrey Plaza. Pets opened in two territories internationally last weekend and added four more this weekend as its international cume currently stands at $29.6 million. The film will hit theaters in 60 more territories over the next three months and, along with domestic theaters next weekend, it will also be opening in India.

For a look at this weekend's three-day estimated results click here and we'll update the charts with four-day results tomorrow followed by actuals on Tuesday afternoon.