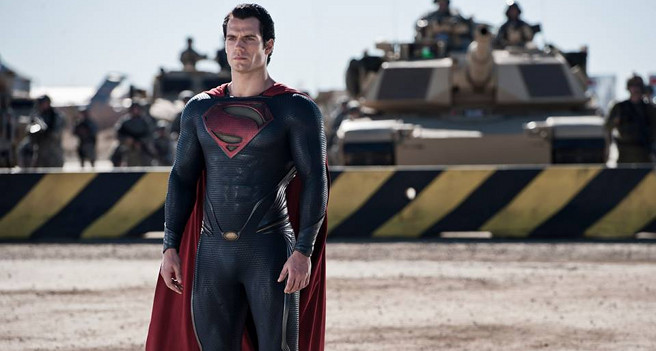 The Thursday grosses make the math a bit tricky, but it now seems like Man of Steel is guaranteed to earn at least $120 million by Sunday. It could even make it over $140 million if it winds up being a major draw on Father's Day.

Friday AM Update: Before regular Friday shows even begin, Man of Steelhas already taken in an estimated $21 million. It earned $12 million from Thursday night's Wal-Mart screening program, and an additional $9 million from general midnight shows. While the Wal-Mart shows throw off the calculation a bit, this is without-a-doubt a very strong start for a non-sequel, and it's very likely that the movie winds up with at least $100 million through Sunday.

Note: Because the Wal-Mart shows occured exclusively on Thursday, Box Office Mojo will be recording those grosses on that day.

Forecast: With an incredibly strong brand and an aggressive, bold marketing effort, Man of Steel is set to fly high this weekend—so high, in fact, that it's almost guaranteed to set a new opening weekend record for the month of June.

The Superman reboot, directed by Zack Snyder and produced by Christopher Nolan, opens in 4,207 locations, which is the second-widest release ever for a non-sequel. It will easily take first place this weekend ahead of apocalypse comedy This is the End, which is also poised for a good start after opening to $7.8 million on Wednesday.

Superman's last big-screen outing was 2006's Superman Returns, which scored a five-day opening of $84.6 million on its way to just over $200 million total. While that's a solid number, it was viewed at the time as a bit underwhelming given Superman's status as one of the most-popular comic book characters ever. The Bryan Singer-directed flick was also met with a tepid audience response, which has since been attributed in part to its strict adherence to the world created by Richard Donner's 1978 Superman movie. As a result, Warner Bros. avoided making a sequel, and instead focused their comic book efforts on other characters in the DC Comics Universe.

Seven years later, Warner Bros. is starting from scratch with Man of Steel. To do so, they turned to Christopher Nolan, who was responsible for WB's hugely-successful Dark Knight trilogy. After Nolan hashed the story out with screenwriter David S. Goyer, 300/Watchmen director Zack Snyder was brought on board to execute the vision. While Snyder is maligned in some circles, his visual skills are widely respected, and the combination of Nolan and Snyder's name give Man of Steel major comic book credentials.

Man of Steel's marketing started slow—the first teaser barely featured Superman—but Warner Bros. really turned in their A-game over the past few months. While advertisements do promise the kind of massive action that Superman fans are anticipating, the primary emphasis is on the origin story and the movie's rich, lofty themes. It also smartly hints at Superman actor Henry Cavill's good looks and his flirtation with Amy Adams' Lois Lane, which should make the movie more accessible to women. By focusing on story and character—all set to Hans Zimmer's already iconic score—Man of Steel is well-positioned to expand its audience beyond comic book aficionados.

While early word was that the movie was an unqualified success, reviews haven't been nearly as kind: as of late Thursday afternoon, the movie was on the border between fresh and rotten on Rotten Tomatoes. For a movie of this scale, though, mixed reviews aren't typically an issue on opening weekend, and that should be the case for Man of Steel as well.

Adjusted for ticket price inflation, Superman Returns's five-day opening would come in at around $102 million. While that was very highly anticipated at the time, it's safe to say that Man of Steel is generating at least a bit more buzz. It's also important to note that the marketplace has made room for Man of Steel—no title in the past two weekends has opened higher than $34.3 million, and none of the holdovers will gross more than $15 million this weekend.

The current record-holder for a June opening weekend belongs to 2010's Toy Story 3 ($110.3 million), though Transformers: Revenge of the Fallen had a higher three-day start ($127.8 million). While both of those movies had the sequel advantage, Man of Steel also has an established brand, and has at least as much excitement surrounding it. Therefore, an opening in that range seems like a lock right now.

Man of Steel also opens in 24 international markets this weekend, including the U.K., South Korea and Mexico. Superman Returns made a modest $191 million overseas, which is a figure that Man of Steel should at least double thanks to the expanded intnernational marketplace and the addition of 3D. In fact, it could make much more—on Wednesday, it set an opening day record in the Phillippines with $1.66 million, which suggests that foreign demand is probably higher than originally anticipated.

While it's going to make a lot less than Man of Steel, apocalypse comedy This is the End also appears poised for a solid start this weekend. For comedies to break-out, they need to have a strong premise and deliver laughs, and the directorial debut of Superbad writing partners Seth Rogen and Evan Goldberg seems to be in good shape in both areas. The movie definitely has the premise part locked down: it finds Rogen and a handful of his acting buddies, playing themselves, trapped in James Franco's house during the apocalypse. The jokes in the previews aren't as inspiring, though strong reviews and social network buzz both seem to reassure audiences that the movie is, in fact, quite funny.

The movie essentially functions as a sequel to Pineapple Express—Seth Rogen, James Franco and Danny McBride all have significant roles—but a better comparison may be 2008's Tropic Thunder. That movie was also a violent, profane R-rated comedy that lampooned Hollywood actors (though Ben Stiller, Jack Black and Robert Downey Jr. weren't playing themselves). It also opened on a Wednesday, and had collected $36.8 million by Sunday. Following its $7.8 million Wednesday debut—a bit higher than Tropic Thunder—Sony is currently expecting This is the End to earn in the low-to-mid-$30 millions by Sunday.

After grossing $1.5 million through its third weekend in limited release, Before Midnight expands nationwide in to nearly 900 theaters this weekend. It's getting some of the best reviews of the year, and should ultimately wind up out-grossing predecessors Before Sunrise ($5.5 million) and Before Sunset ($5.8 million).

Finally, upstart distributor A24 releases Sofia Coppola's The Bling Ring in five locations this weekend. Unfortunately, reviews are mixed (62 percent on Rotten Tomatoes) and it would be surprising if it got to the same level as A24's other girls-gone-wild movie Spring Breakers ($14.1 million).

Superman Returns's five-day debut adjusts to $102 million; if Man of Steel hits that in three days, it's off to a very good start. Meanwhile, if This is the End exceeds $30 million through five days, it's also in solid shape.