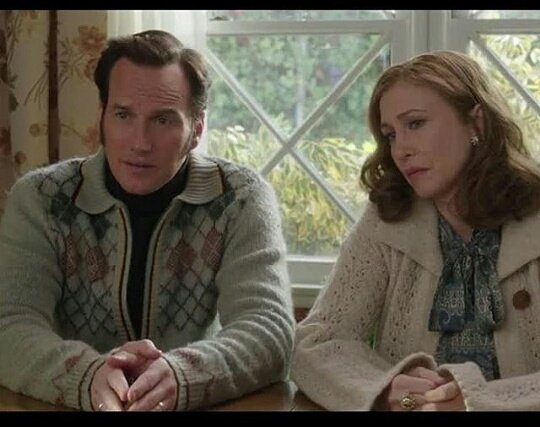 'Conjuring 2' Looks to Scare Up a #1 Finish Over 'Now You See Me 2' and 'Warcraft'
June 9, 2016 19:56 PDT - By Brad Brevet - Box Office News
Saturday AM Update: Friday estimates are in and The Conjuring 2 finds itself atop the chart with an estimated $16.4 million on track to finish a bit above Mojo's forecast and an opening weekend around $38 million.

Finishing second is Universal's Warcraft with an estimated $10.7 million, a better start than expected as it is now looking at an opening around $27 million or so, but the story remains its status in China, which is now around $145 million after just four days. The film's international total is now estimated at $276.9M as of end of day yesterday.

Lionsgate and Summit's Now You See Me 2 is right on schedule for a $24 million opening after bringing in an estimated $8.4 million on Friday.

You can browse the Friday estimates right here and we'll be back tomorrow with a complete weekend wrap-up.

Friday AM Update: Leading the charge Thursday evening, Warner's The Conjuring 2 brought in $3.4 million from preview screenings, a number that matches The Purge, which opened in early June 2013 and went on to haul in $34 million in its opening weekend. It's also $100,000 more than the original film brought in when it opened, leading to a $41.8 million opening.

Warcraft jumped off to a strong start on Thursday evening, hauling in $3.1 million in late night shows in 2,632 theaters, which began at 7:00 PM. It's a number that immediately causes some second guessing based on early estimates as San Andreas brought in the same amount on Thursday evening last May and opened with $54.5 million. Also, Pacific Rim brought in $3.6 million in July of 2013 and opened with $37.2 million. Of course, given the buzz, a better comparison may actually be last year's Fantastic Four, which brought in $2.7 million from Thursday showings, ultimately opening with $25.6 million. The big question is whether this is a sign of things to come or just hardcore fans showing up to see the film the first chance they get. Friday estimates tomorrow morning will flesh the story out much more.

Weekend Preview: This weekend offers up the 16th and 17th wide release sequels of 2016 in the form of The Conjuring 2 and Now You See Me 2. Meanwhile Warcraft delivers the year's third video game adaptation with one more on the way. Expectation is for the three films to finish "one, two, three" respectively at this weekend's box office with the Conjuring and Now You See Me sequels hoping to deliver better results than recent 2016 sequels have been able to muster when compared to their original releases. Warcraft, however, is looking like it's mostly going to be an international play for Universal and the film's financiers as it has now topped $168 million from overseas markets, including record numbers in China, while eyeing a lackluster domestic debut.

At the top of this weekend's box office will be the sequel to James Wan's 2013 supernatural, "based on a true story" thriller, The Conjuring. Upon its release, the film scored well with critics (86% on RottenTomatoes) and, in its opening weekend, brought in $41.8 million on its way to an impressive, 3.28 multiplier and $137.4 million domestic run. Three years later, The Conjuring 2 arrives with a blockbuster advertising campaign and solid reviews so far (currently 70% on RottenTomatoes), though don't expect it to improve on the original.

Budgeted at a reported $40 million and opening in 3,343 theaters, expectation is for the film to open somewhere at or above $35 million. Mojo is forecasting a slightly higher result after looking at IMDb traffic data, which places it right around where Annabelle (among other comparable titles) was at the same point in the release cycle before going on to open with $37.1 million. The Conjuring 2 also has the benefit of being the widest horror release of the year so far, all of which should help contribute to a solid opening and, if it can match the original's "A-" CinemaScore, it could be looking at a healthy domestic run that could crack as much as $90 million.

Lionsgate and Summit's Now You See Me 2 is looking at a second place finish. The 2013 original delivered a $29.3 million opening and a $117.7 million domestic haul on a $75 million budget, and while critics were somewhat harsh on Now You See Me (49% on RottenTomatoes) the audience came to the table with a different opinion. 70% of the RottenTomatoes audience said they liked it and it currently holds a 7.3 audience rating on IMDb. That said, does the current 36% RottenTomatoes rating for the sequel really mean all that much?

The studio added a reported $15-25 million to the sequel's budget and Harry Potter star Daniel Radcliffe was added to the cast, which lost Isla Fisher from the original, but gained Lizzy Caplan. Industry expectations peg the opening around $22-23 million, but don't be too surprised if this one goes a bit higher, perhaps anywhere from $25-27 million.

The most interesting title this weekend is Universal's Warcraft. Budgeted at a reported $160 million and currently carrying a 21% RottenTomatoes rating, one would expect the anticipated $22-25 million domestic opening weekend for the video game adaptation to be a sign of doom and gloom, and while it's nothing to celebrate, the film's performance internationally so far is quite impressive. In China, Warcraft has already amassed a record $90+ million bringing the international gross-to-date to $168.8 million. The film is also performing well in Russia, France and Germany with openings in 20 more territories this weekend, including Korea. Also helping ease the pocket books is the fact the film was funded by a myriad of investors.

As for that domestic release, industry expectations seem about right, but there is no way to accurately nail this one down as unaccounted for fans of the Warcraft franchise of games could show up in support of the film. Though, if Mojo's informal Twitter poll is any indication, that isn't likely to happen.

Fourth and fifth place on this weekend's chart could be interesting as Me Before You carries an "A" CinemaScore into the weekend after a stellar, $18.7 million opening last weekend and solid Monday-Wednesday dailies. Teenage Mutant Ninja Turtles: Out of the Shadows should take the fourth position with anywhere from $15-16 million while X-Men: Apocalypse and Me Before You could be in a battle for fifth position with Me Before You expected to edge out the mutants.

All-in-all, it's looking as if seven of the weekend's top twelve films will be sequels, which should total somewhere around $143 million. That's well below the same weekend last year, though that weekend did include the $208.8 million opening for Jurassic World, which is more than all the films in release will total this weekend.

In limited release, Reliance will debut Te3n into 105 theaters, Roadside is releasing Genius into 16 theaters and Focus World will release Puerto Ricans in Paris into 41 theaters. Meanwhile, Sony Classics is expanding the release of Maggie's Plan into 311 theaters (+277).