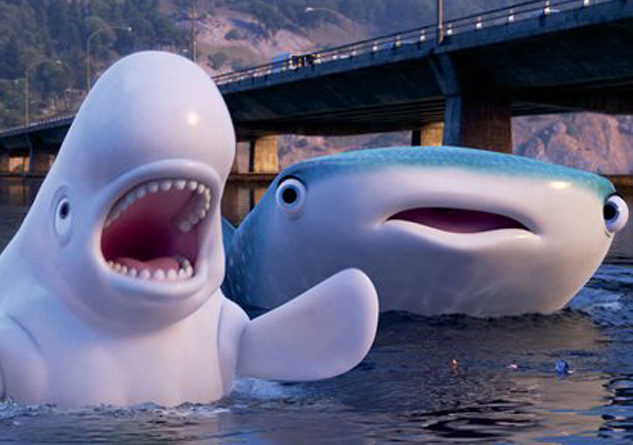 'Finding Dory' Drowns Animated Box Office Records With $136 Million Opening
June 19, 2016 17:15 PDT - By Brad Brevet - Box Office News
Disney finds itself atop the weekend box office for the eleventh time this year, this time it's the Pixar brand coming up big with Finding Dory. The release is another 2016 animated hit for the studio on the heels of Zootopia, as Dory broke its share of box office records this weekend including the largest opening weekend for an animated feature. It was also a good weekend for the week's other new wide release, the action-comedy Central Intelligence starring Dwayne Johnson and Kevin Hart, which could be looking at a $100+ million domestic run after its opening weekend. Meanwhile, last weekend's new releases didn't exactly deliver the goods in their sophomore sessions.

Scoring a number one finish for the weekend and a record opening for an animated feature, Disney and Pixar's Finding Dory brought in an estimated $136.1 million this weekend from 4,305 theaters for a $31,634 per theater average. It's an opening comparable to the 90+% bumps both sequels in the Toy Story franchise saw over their predecessors with Dory's opening weekend serving as a 93.8% bump over Finding Nemo's $70.2 million opening back in 2003.

Dory also scored an "A" CinemaScore and played to an audience that was 45% male vs. 55% female. The age breakdown saw 65% of the audience being made up by families and 32% of the overall audience made up of children 12 and under.

On the record front, on top of the animated opening weekend record, Dory broke the record for the largest single day and opening day for an animated film with its opening day totaling an estimated $54.9 million. Included in that opening day total is $9.2 million in Thursday previews, also a record for an animated feature. Of course, it's a bit of a conflict to call both items "records" when you consider Dory wouldn't hold the single day record over Shrek the Third's $47 million if you don't include the additional $9.2 million. Also going down was the record for the largest per theater average for a wide opening animated release, topping Shrek the Third's $29,507 average after it opened to a then record of $121.6 million from 4,122 theaters.

Dory also opened in 29 international territories this weekend scoring an estimated $50 million for a global opening gross of $186.2 million. Its international roll-out includes the largest Pixar opening ever in China ($17.5M) and the biggest Disney/Pixar opening weekend ever in Australia ($7.6M). The release, so far, makes up 32% of the international marketplace with openings in France and Spain taking place next weekend along with the rest of Europe in the coming weeks.

Finishing in second, the Warner Bros. release of Central Intelligence starring Dwayne Johnson and Kevin Hart scored an estimated $34.5 million for the three-day weekend, a solid start for the comedy. In terms of demographics, the audience was pretty much split down the middle, 49% male vs. 51% female, and it received a solid, "A-" CinemaScore from opening day audiences. The CinemaScore is an improvement over the "B" Get Hard received, while opening with $33.8 million and finishing its domestic run just over $90 million. The score is closer to the "A" received by the first Ride Along, which managed a 3+ multiplier suggesting Central Intelligence could be looking at a domestic run over $100 million.

Looking at the sophomore session for last weekend's new openers isn't quite as pretty as this weekend's new releases. The Conjuring 2 dipped 61.5% after its #1 finish, bringing in an estimated $15.5 million. That's a much larger drop than The Conjuring (46.9%) and even Annabelle (57.3%).

Now You See Me 2 fell 56.9% for an estimated $9.6 million, much steeper than the first film's 35% drop, but nothing on the board really compares to Warcraft's second weekend.

After a rather dismal opening weekend for the video game adaptation, Warcraft fell 73% on its second weekend, bringing in just $6.5 million, drawing a close comparison to 2005's Doom, which fell 72.7% after an equally disappointing opening. Warcraft's drop is the third largest second weekend drop for a film playing in over 3,000 theaters behind 2009's Friday the 13th (80.4%) and Fifty Shades of Grey (73.9%). The big difference here, however, is Warcraft only opened with $24.1 million while those two other films opened with $40.5 million and $85.1 million respectively, giving them both much further to fall.

Warcraft did, however, bring in another $41.2 million internationally this weekend as its global cume now climbs to $377.6 million, more than $200 million of which comes from China.

Elsewhere in the top ten, Captain America: Civil War finally topped $400 million domestically this weekend, making it the 23rd film to cross that mark and the fourth film in the Marvel Cinematic Universe.

Finally, in limited release, Dimension's Clown could only muster $27,000 from 100 theaters for a measly $270 per theater average. Wonder Vision's Seoul Searching brought in $9,215 from one theater and Tugg's "event" release of Range 15 brought in $1,044 from one theater after an impressive one day haul of $431,338 on Wednesday. We're still waiting on official weekend totals for Gaatri Media's release of Gentleman, but rival studio reports peg the film's opening around $500,000 from 126 theaters.

Looking forward, next weekend will be one to watch as Finding Dory rolls into its second weekend and could easily take the #1 spot once again. Should the film drop similarly to Toy Story 3, which dipped 46.2% in its second weekend after a $110.3 million opening, we're looking at a $70+ million second weekend. The big title opening next weekend, however, like Dory, is a sequel and it's a sequel to a massive hit that could hold a measure of nostalgia for a healthy portion of the audience.

Independence Day: Resurgence is set to open in more than 3,900 theaters next weekend, but as much as the original Independence Day from 1996 may hold a measure of nostalgia, it isn't on par with something such as the Jurassic Park franchise. Prior to the release of Jurassic World last year, the franchise had years of sequels and merchandising to keep the franchise fresh not only in the minds of those that saw the original, but audiences that may not have even been alive to see the original. A forecast for Resurgence is a tough one to make as an argument could be made for an opening anywhere from $45-90 million, but that obviously opens the possibility for a second weekend atop the box office for Pixar and Dory.

Also opening next weekend is the Matthew McConaughey-led historical action drama Free State of Jones, the Blake Lively shark thriller The Shallows and Broad Green's release of Nicolas Winding Refn's The Neon Demon, which is expected to open in over 1,000 theaters.