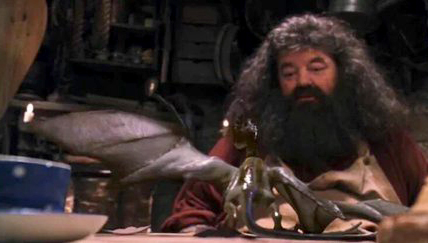 'Potter's Opening Record to Be Challenged Soon
July 22, 2011 17:16 PDT - By Ray Subers - Box Office News
A little less than ten years ago, Harry Potter and the Sorcerer's Stone established a new opening weekend record when it debuted to $90.3 million. Since then, that record has been held by Spider-Man ($114.8 million), Pirates of the Caribbean: Dead Man's Chest ($135.6 million), Spider-Man 3 ($151.1 million) and The Dark Knight ($158.4 million). Just a few days ago, Potter reclaimed the top spot, with serious finale Deathly Hallows Part 2 scoring a massive $169.2 million. Looking at the upcoming release schedule, Potter may not hold the crown for very long. Here are the Top Five contenders through the end of 2012:

The Twilight Saga: Breaking Dawn (Part One) (Nov. 18): While it will likely pain Potter fans to hear this, there's a realistic possibility that the first part of the Twilight finale will establish a new opening weekend record. New Moon, the last Twilight movie to open in November, scored a huge $142.8 million in its first weekend. The following Summer, Eclipse burned off demand with a mid-week debut, but ultimately went on to become the highest-grossing entry in the series with just over $300 million. Harry Potter and the Deathly Hallows Part 1 was also the first part of a two-part finale and opened on the same weekend last November, and ended up being the top opening weekend for the Potter series by 22 percent. A similar bump would place Breaking Dawn (Part One) at $173 million, which would set a new record.

The Avengers (May 4, 2012): After five movies that essentially served as mega-budgeted advertisements, The Avengers will finally reach theaters on the prime first-weekend-of-summer slot, when Spider-Man and Spider-Man 3 set their benchmarks in the past. Iron Man 2 debuted to $128.1 million on this weekend in 2010, and The Avengers will essentially function as Iron Man 3 with some new friends along for the ride. While none of those new friends are quite as popular as Tony Stark (Thor currently leads the way with $179.7 million, though Captain America could top that), their meet-up should make this a formidable event movie. If audiences haven't completely rebelled against 3D by next May, an opening north of $150 million for The Avengers feels like a foregone conclusion.

The Dark Knight Rises (July 20, 2012): When Deathly Hallows Part 2 broke The Dark Knight's opening weekend record, all eyes immediately jumped a year ahead to July 20, 2012, when The Dark Knight Rises will attempt to reclaim the title. The recently released teaser trailer billed it as the "The Epic Conclusion to the Dark Knight Legend," clearly stating that this is the definitive end of the Christopher Nolan Batman trilogy. Typically, that ensures a significantly higher opening (look no further than Deathly Hallows Part 2 for evidence of this). However, the teaser trailer has failed to generate the same kind of enthusiasm as the similarly-timed teasers for The Dark Knight and Nolan's Inception, and there's virtually no way the combination of Bane and Catwoman can come close to matching the hype surrounding Heath Ledger's rendition of the Joker. This is nit-picking, though, and it's hard to imagine The Dark Knight Rises opening below $150 million.

The Hobbit: An Unexpected Journey (Dec. 14, 2012): Since The Lord of the Rings: The Return of the King earned over $1.1 billion worldwide and won 11 Academy Awards, legions of fans have been eagerly awaiting The Hobbit. The first of two prequels is guaranteed to earn epic amounts of money, but unfortunately an opening weekend record probably isn't on the forecast. The reason is quite simple: December releases open comparatively low then hold well through the Holidays. At the very least, though, The Hobbit should unseat I Am Legend ($77.2 million) to claim a new December record.

Sherlock Holmes: A Game of Shadows (Dec. 16, 2012): The first Sherlock movie was a successful romp, and this one ups the ante with the introduction of Holmes's classic nemesis Moriarty. December doesn't usually engender huge openings, though, and, even outside that month, it's tough to imagine this opening much higher than I Am Legend's previously-mentioned December record.

MIB 3 (May 25, 2012): The first Men in Black movie made the equivalent of nearly $430 million adjusted for ticket price inflation. The second movie isn't fondly remembered ten years later, though, and Will Smith's been out of the public eye long enough that it's possible his star has cooled a bit.

Untitled Star Trek Sequel (June 29, 2012): First of all, this movie reportedly doesn't even have a script, so it likely won't open in 11 months. In fact, it looks like it's going to have a tough time hitting theaters anytime in 2012. While the J.J. Abrams-directed reboot was a mainstream hit with $257.7 million, it's unlikely that the sequel will become the sort of cultural phenomenon that results in a record-breaking opening.

The Amazing Spider-Man (July 3, 2012): Spider-Man and Spider-Man 3 set opening weekend records, and Spider-Man 2 probably would have as well had it not been for a Wednesday opening. The Amazing Spider-Man is also opening mid-week, this time on a Tuesday, so it doesn't have much of a shot either. Even if it does move to a Friday, though, closely-timed series reboots rarely result in huge initial attendance, as demonstrated recently by Batman Begins and X-Men: First Class.

The major contenders from 2013 are Iron Man 3 and The Hobbit: There and Back Again, and both will depend on the reception of their predecessors (The Avengers and The Hobbit: An Unexpected Journey).

What movie do you think will unseat 'Deathly Hallows Part 2'? Discuss on Facebook, Twitter, and in Box Office Mojo'sforums.