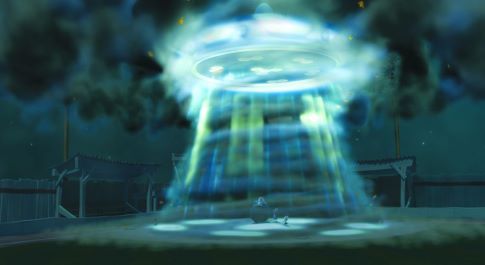 'Zathura,' 'Derailed,' 50 Cent Below 'Chicken Little' in Pecking Order
November 14, 2005 14:23 PST - By Brandon Gray - Box Office News
The sky didn't fall for Chicken Little, but it has yet to rise in regards to overall business. With modest starts from Zathura, Derailed and Get Rich or Die Tryin', the weekend was down 13 percent from the comparable frame last year, and it was the least attended second weekend in November since 2000.

Buoyed by Veteran's Day falling on Friday, Disney's Chicken Little eased 21 percent to $31.7 million for an $80.4 million tally after ten days. Among super-saturated releases (over 3,000 theaters), only The Santa Clause 2 and Elf had smaller second weekend drops without the benefit of a major holiday. Chicken Little lost less of its audience than The Incredibles, Monsters, Inc. and Finding Nemo did at the same point, although it's considerably behind overall with less than 58 percent of their attendance. On its current trajectory, Chicken Little could end its run as an average computer-animated event with a gross of over $160 million.

Zathura blasted off with $13.4 million at 3,223 locations, drawing in the same range as The Adventures of Sharkboy and Lavagirl in 3D earlier this year. Distributor Sony's exit polling indicated that families comprised 71 percent of the audience—an expected turn-out for the board game adventure "from the world of Jumanji." The studio hopes the $65 million picture directed by Elf's Jon Favreau will play well through the holidays, despite a direct hit from Harry Potter and the Goblet of Fire next weekend.

While Zathura's marketing dazzled with its image of a house floating in space—relating to how children can imagine the extraordinary out of mundane surroundings—the promised adventure simply had things happening to the characters in their house without context, unless one remembers Jumanji from ten years ago. The ads did not emphasize kid empowerment, an element that drives success in the genre from Home Alone to Spy Kids. What's more, the cryptic title did not help—Jumanji overcame that problem with the familiarity of Robin Williams in his family-appeal prime.

Similar to last year's top two, a Disney-released family movie beat a competing one based on a Chris Van Allsburg (Jumanji) story by more than twofold. Last year, The Incredibles grabbed $50.3 million in its second weekend compared to The Polar Express' $23.3 million. This year, Chicken Little's $31.7 million trumped Zathura's $13.4 million.

The inaugural release from The Weinstein Company, Derailed, gripped $12.2 million at 2,441 sites. Taking advantage of a dearth of adult thrillers, the adultery and blackmail suspense picture starring Clive Owen and Jennifer Aniston, which supposedly cost $22 million to make, veered ahead of industry expectations. The Weinstein Company's research suggested that 60 percent of the audience was female.

"A lot of Jennifer's [Aniston] fans showed," said Weinstein's head of marketing, Gary Faber, noting that Derailed played equally well to men and women. "You look at a lot of female pictures lately that disappointed, and there just hasn't been anything for men in them. We plan to shift the campaign to get more men."

Gangster rapper 50 Cent's Get Rich or Die Tryin' loaded $12 million from 1,652 venues, which was okay but nothing to boast about in light of the movie's hype. Paramount Pictures' $40 million crime drama has bagged $17.7 million in five days of release, and the studio's exit polling indicated that 53 percent of moviegoers were under 25 years old, 51 percent were female and 75 percent were black.

Relative to Eminem's 8 Mile, 50 Cent's Get Rich or Die Tryin' was two bit. Both pictures were the R-rated semi-biographical big screen debuts of top-selling rappers, directed by unlikely, acclaimed moviemakers (Curtis Hanson for 8 Mile, Jim Sheridan for Get Rich or Die Tryin') and released in early November. However, 8 Mile grabbed $51.2 million in its 2002 opening weekend, with distributor Universal Pictures reporting a demographic breakdown of 69 percent under 25, 53 percent female and 26 percent black. Paramount had a higher "definite recommend" rating from Get Rich moviegoers—87 percent versus 8 Mile's 67 percent.

"Get Rich or Die Tryin' was pretty much within the figures we were looking for," said Paramount head of distribution, Wayne Lewellen. "Obviously, 50 Cent's popularity as a rap artist was the appeal, and the fact that the movie's a semi-biography of his life." Lewellen denied that the release was patterned after 8 Mile. "Basically, what they have in common are the musical backgrounds, beyond that I don't think you could draw comparison. The timing was coordinated with the release of 50 Cent's latest album and of his video game, and we felt like the market conditions were right."

Whereas 8 Mile promised a rousing underdog story, putting Eminem's music at the fore, Get Rich or Die Tryin' looked like a generic crime drama with some music on the side—50 Cent was its only distinguishing characteristic, taking the picture a little higher than the similar Hustle and Flow from earlier this year.

Among holdovers, Jarhead was most notable for its fall, fueled by mixed word-of-mouth. In its second weekend, Universal's $72 million frustrated war drama retreated 58 percent to an estimated $12.3 million, a drop analogous to previous November military-themed movies, Behind Enemy Lines and Starship Troopers. Ten days into deployment, Jarhead has amassed $46.5 million.

NOTE: This report was originally published on Sunday, Nov. 13 and was updated on Monday, Nov. 14 with actual grosses.