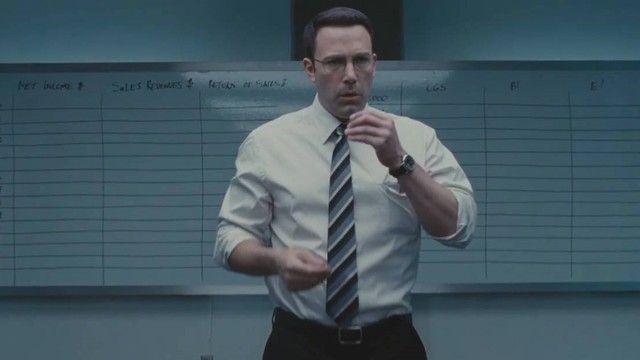 'Accountant' Tops Box Office, 'Inferno' Opens Overseas & 'Pets' Enters Top 50
October 16, 2016 17:14 PDT - By Brad Brevet - Box Office News
Warner Bros.'s The Accountant stormed well ahead of BoxOfficeMojo's weekend forecast to finish #1 for the weekend. The Ben Affleck starrer more than than doubled its closest competition, which found a pair of Universal titles competing for second place between the debut of Kevin Hart: What Now? and last weekend's #1 film, The Girl on the Train. Meanwhile, Open Road's Max Steel finished outside the top ten with one of the worst openings ever for a film debuting in over 2,000 theaters. Overall, the top twelve only finished slightly higher than Mojo's projections despite The Accountant over-performing, bringing in a combined $88.5 million, which is down 7.4% compared to last weekend and down nearly 21% compared to last year.

At #1, The Accountant rung up an estimated $24.7 million over the weekend, well ahead of not only Mojo's forecasts but industry expectations that were anticipating an opening anywhere from $15-20 million. While the opening is relatively similar to last weekend's $24.5 million opening for The Girl on the Train, one big difference is the audience response, which saw The Accountant earn an "A-" CinemaScore from opening day audiences compared to the "B-" Girl on the Train received last week. Neither film scored very well with critics as The Accountant's RottenTomatoes score currently stands at 51% compared to Girl's 43%, but an "A-" CinemaScore suggests The Accountant could be holding on better next weekend compared to the 51.2% drop Girl experienced this weekend.

The Accountant, however, will have some added competition next weekend in Tom Cruise's Jack Reacher: Never Go Back as both films are likely to play toward something of a similar audience. 2012's Jack Reacher played to an audience that was 60% male and 76% were over the age of 25 while The Accountant played to an audience that was 58% male vs. 42% female and 86% was over the age of 25. There aren't any early reviews for the Jack Reacher sequel, but the previous film received a 62% rating on RottenTomatoes and opened with $15.2 million. Between The Accountant, Jack Reacher and The Girl on the Train adult audiences have quite a bit to choose from as of late, which could make for a very interesting weekend next week.

Speaking of The Girl on the Train, as already mentioned, it dipped just over 51% in its second weekend, bringing in an estimated $11.97 million, which currently places it in third, just behind fellow Universal release, Kevin Hart's third (and reportedly final) concert feature Kevin Hart: What Now?

Debuting in 2,567 theaters, What Now? delivered an estimated $11.98 million, which is the largest opening ever for a stand-up comedy film. Hart's previous comedy concert, Let Me Explain, did, however, open on a Wednesday and brought in $17.3 million over its five-day opening from just 876 theaters, which adds some additional perspective to this opening as it was in nearly three-times the number of venues.

What Now? was not only a hit at the box office as well as the best-reviewed film of the comedian's trio of concert films (78% on RottenTomatoes), but it was also a hit with audiences. The audience breakdown was 49% male vs 51% female, of which gave the film an "A-" CinemaScore. Additional demographics show 46% of the audience was under the age of 25 and 43% was African American, 24% Caucasian and 23% Hispanic. The film's production budget, which was funded by Hart himself, was just below $10 million.

Rounding out the top five we have a pair of junior releases, both of which carry $110 million budgets. In fourth, Fox's Miss Peregrine's Home for Peculiar Children delivered an estimated $8.9 million as its domestic cume climbs over $65 million and Lionsgate's Deepwater Horizon finished fifth with an estimated $6.35 million as its cume now stands just below $50 million. The big difference between these two big budget titles right now, however, is the fact Miss Peregrine is nearing $200 million worldwide while Deepwater currently sits at $77 million worldwide, though we are still awaiting updated international totals for the latter.

CBS and Lionsgate's Middle School finished in eighth in its second weekend, dropping 38% and bringing in an estimated $4.2 million and rounding out the top ten we find Fox Searchlight's The Birth of a Nation, which dipped a hefty 61% in its second weekend, well below the worst case scenario of 55% we considered on Thursday.

Finishing outside the top ten is the weekend's other new wide release, Open Road's Max Steel, which brought in an estimated $2.16 million from 2,034 theaters. The opening is the thirteenth worst opening for a film debuting in more than 2,000 theaters.

As for Desertio, the film from Jonas Cuaron is Mexico's official entry for Best Foreign Language Film for this year's Academy Awards and was acquired by STX for roughly $1.5 million, limiting their financial exposure. The studio is looking at expansion opportunities over the coming weeks.

We're still waiting on overall weekend results for FUNimation's release of Shin Godzilla. The film, which has delivered $75 million in Japan already, debuted domestically on Tuesday in 488 theaters and finished in the top ten in its first three days of release where it generated just over $1 million domestically. This weekend its theater count was limited on Friday and Sunday, really only getting a larger release on Saturday. We'll be updating those numbers once they arrive, but may not have them until Monday afternoon.

Finally, Universal's animated feature The Secret Life of Pets brought in an estimated $5.7 million internationally this weekend, bringing its worldwide cume to $857.7 million, moving it ahead of Pixar's Inside Out and making it one of the top 50 all-time worldwide releases.

Next weekend sees the premiere of four new wide releases including Tom Cruise aforementioned return as the title character in Jack Reacher: Never Go Back in ~3,500 theaters, Tyler Perry is back with Boo! A Madea Halloween, Fox will release the ensemble comedy Keeping Up with the Joneses and Universal has the horror sequel Ouija: Origin of Evil.