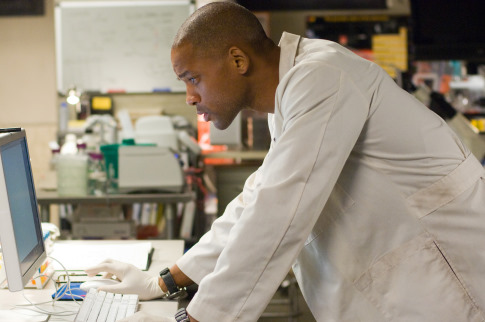 Around the World Roundup: 'Legend' First for Fifth Weekend
January 25, 2008 13:20 PST - By Conor Bresnan - Box Office News
The foreign box office cooled over the weekend, but I Am Legend continued to be on fire, grossing $28.7 million from 56 territories for a $262.5 million total. The sci-fi horror notched eight No. 1 debuts, including $4.3 million from 510 screens in Mexico, which was superior to past titles like Troy, 300 and Hitch. In Brazil, I Am Legend scored $2.8 million from 423 screens, more than doubling Hitch, and, in Chile, it took $312,762 from 38. Germany was the picture's top holdover. Despite falling 52 percent, it made a remarkable $5.2 million in its second frame there, pushing its total to $17.8 million. In Italy, it was also impressive, maintaining the top spot with $4.3 million for a $15.3 million total. The movie's next major release is in Russia and Feb. 7.

Rising to second place thanks to a big opening in the United Kingdom, Aliens Vs. Predator - Requiem grossed $11.1 million over the weekend from 49 territories for a $69.2 million total. The horror sequel's $3.9 million first place debut in the U.K. was marginally higher than Alien Vs. Predator, and it thumped its predecessor in South Korea with a $930,957 launch.

Alvin and the Chipmunks earned most of its $9.9 million weekend tally from holdovers, but it had a decent start in Italy as well. While Alvin landed in fourth place on the local chart, it still nabbed $1.8 million from only 256 screens.

More than doubling that debut in Italy was American Gangster with $4.4 million from 252, which was 68 percent bigger than The Departed. Overall, the crime drama tallied $9.1 million over the weekend from 37 markets for a $93 million total.

Already a surprise hit, P.S. I Love You entered the Top Five due to an enormous start in Germany ($4.8 million from 494 screens). The romantic drama nearly unseated I Am Legend and even topped the past launch of Something's Gotta Give. Elsewhere, P.S. remained a solid, falling just 18 percent in the U.K. where it placed third in its fifth week of release for a $14.4 million total. The movie's overall weekend was $9 million from 14 markets, raising its overall gross to $31.4 million.

Below the Top Five, several high profile pictures had great overseas starts. Sweeney Todd: The Demon Barber of Fleet Street began with $6.3 million from four markets. The musical led Japan with $3.6 million from 400 screens, which bested Chicago by 51 percent. In South Korea, it landed in third place with a nonetheless impressive $2 million from 293 screens and it was satisfactory in the Philippines ($115,860 from 20 screens) and Taiwan ($486,906).

Cloverfield kicked off in the right direction but did not perform as well internationally as it did domestically. In Australia, the monster movie narrowly topped 27 Dresses' second weekend with $2.2 million from 235 screens and lost to Death at a Funeral in New Zealand with $265,405 from 54. The Southeast Asian territories were strong as expected, including Hong Kong (a top-ranked $546,851 from 38) and Thailand ($557,692 from 68).

Debuting in fifth place in a crowded Australia, Juno looked well with $1.7 million from a semi-wide 168 screens. That almost doubled Little Miss Sunshine, was on par with Superbad but was worse than Knocked Up.

Meanwhile, two older hits opened in their final markets. Mr. Bean's Holiday ended on a positive note, snaring almost $1 million from 137 screens in Japan. That could easily blossom into $7 million by the end of its run and could push the comedy's total past $200 million. However, The Pursuit of Happyness ended negatively in China, making only $295,101 from 516 screens. Due to a cap that China sets on the number of U.S. movies released, distributor Sony had to push Pursuit to 2008. Pursuit's total stands at $142.9 million.