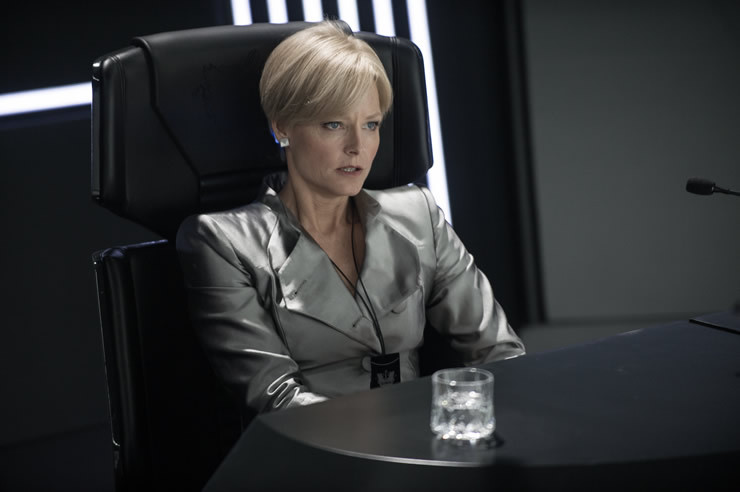 Meanwhile, Cars spin-off Planes will likely wind up in second, while We're the Millers and Percy Jackson: Sea of Monsters should also do decent business following their solid openings on Wednesday. Overall, this is going to be one of the biggest weekends ever in August with a combined take north of $150 million.

Opening at 3,284 locations, Elysium is this year's latest movie to test audience interest in original sci-fi. Oblivion and Pacific Rim both opened to $37 million; Oblivion closed below $90 million, while Pacific Rim should inch past $100 million. Meanwhile, After Earth bombed with just over $60 million, though that had its own share of unique issues.

For a handful of reasons, it's likely that Elysium's appeal is around the same ballpark as Oblivion and Pacific Rim. Similar to those two movies, the director has some geek credibility, and Sony has smartly pushed the District 9 association in all of Elysium's marketing material. That movie opened to $37.4 million in August 2009 on its way to $115.6 million; it also received four Oscar nominations, including a surprise Best Picture nomination, and has a strong 8.0 rating on IMDb. With its bleak view of the future and its seamless blending of practical and visual effects, Elysium aligns nicely with the District 9 brand.

Similar to Oblivion, Elysium also has a major star in its lead role. Unfortunately, Matt Damon's track record isn't quite as strong as Tom Cruise's: outside of the Bourne movies, Damon has never headlined an opening over $25 million (Saving Private Ryan, The Departed and the Oceans franchise were all ensemble pieces). By playing a butt-kicking man-on-a-mission, Damon is at least operating within his Bourne wheelhouse here, though the shaved head and metallic exo-skeleton could distract from that a bit.

It's worth noting that Elysium has a restrictive "R" rating, whereas Pacific Rim and Oblivion were "PG-13." Also, Elysium has only been receiving lukewarm reviews, most of which suggest that it's at least a notch below District 9. Based on pre-release tracking, Sony is expecting the movie to earn somewhere in the mid-$30-million range.

Playing at 3,260 locations, R-rated road trip comedy We're the Millers reunites stars Jason Sudeikis and Jennifer Aniston, who were previously in ensemble comedy Horrible Bosses. That movie debuted to $28.3 million and held extremely well through Summer 2011 on its way to a total of $117.5 million. While the We're the Millers story—a fake family attempts to smuggle drugs from Mexico to the U.S.—is clearly articulated in its marketing, it's not nearly as irresistible as Horrible Bosses, which should keep it from matching that movie's business.

In general, R-rated comedies in August have a mixed track record. There are a handful of huge hits like Superbad, Tropic Thunder and The 40-Year-Old Virgin, all of which wound up over $100 million. There are also a few recent bombs: 2011 releases The Change-Up and 30 Minutes or Less both earned under $40 million.

Based on early results, it's likely that We're the Millers will wind up closer to the hits. The movie opened to $6.78 million on Wednesday, which is a bit above Tropic Thunder's opening (though it's just over half of Pineapple Express's debut, which was also a drug-focused comedy). It's hard to say specifically how much that means for the five-day start, though odds are that We're the Millers grosses around $30 million through Sunday.

Disney's Planes—a Cars spin-off that was originally set for direct-to-video release—opens at 3,702 locations this weekend. The Cars movies both opened over $60 million, though those had the Pixar brand and a prime June release date. In comparison, Planes has been relegated to August, a month in which studios have historically avoided releasing animated fare.

There's also the issue of animated movie fatigue: including The Smurfs 2, animated movies have so far earned over $800 million at the domestic box office this Summer. This has already affected Turbo and The Smurfs 2, both of which fell short of modest expectations.

Still, Planes is appealing enough that it should set a new high mark for animated movies in August. That's not saying much, though—Barnyard: The Original Party Animals currently has the top opening ever at $15.8 million.

Finally, Percy Jackson: Sea of Monsters opens at 3,031 locations. The first Percy movie opened in February 2010 to considerably more fanfare: at the time, it was being pitched as another Harry Potter-like adventure, and even had the same director as the first two Potter flicks (Chris Columbus). The movie opened to a fine $31.2 million on its way to $88.8 million, which is a tiny fraction of the Potter movies. It also didn't quite click with audiences, and currently has a 5.8 rating on IMDb.

Still, the first movie earned $137 million overseas, and with the growth of the foreign market in the past few years it made sense to give this franchise another shot. Currently, that decision seems like a decent one: the new Percy movie opened to $5.45 million on Wednesday, which is ahead of last week's The Smurfs 2 ($5.2 million) and about in line with Turbo ($5.55 million). That puts it on pace to earn close to $30 million by Sunday; Fox is hoping for mid-$20 millions.

Also, with the addition of 3D, it's fair to expect Percy to at least match the first movie's $137 million foreign total.

Finally, writer-director Woody Allen's Blue Jasmine is expanding from 50 to 116 locations. It should improve on last weekend's $1.86 million gross, and could even crack the Top 12.

With a much bigger budget and a major star, Elysium ought to be matching District 9's $37.4 million debut. We're the Millers and Percy Jackson: Sea of Monsters are both in good shape if they reach $30 million by Sunday. Finally, Planes gets a pass if it reaches $25 million.