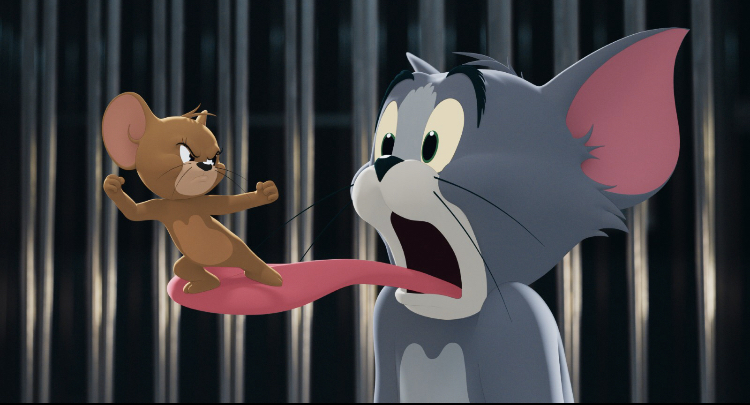 ‘Tom and Jerry’ Animate A Sleepy Winter Box Office With $13.7 Million Bow, The Second-Highest Opening Of The Pandemic Era
February 28, 2021 15:38 PST - By Chris Nashawaty - Box Office News
And a warring cat and mouse shall lead them…. Just when it was beginning to look as if the sleepy winter box office couldn’t get drearier, along came Warner Bros.’ Tom and Jerry to give North American movie theaters a shot in the arm—and a conk on the head or two.

The PG-rated animated family film featuring the iconic squabbling cat-and-mouse team (as well as human actors Chloe Grace Moretz, Michael Pena, and Colin Jost) rocked multiplexes over its inaugural weekend, pulling in a whopping $13.7 million. The debut marked the second-highest domestic bow of the pandemic era, bested only by Wonder Woman 1984’s $16.7 million domestic haul over the 2020 Christmas weekend. Tom and Jerry arrived in 2,475 theaters and racked up an impressive $5,539 per-screen average. The film also did bang-up business overseas, where it added $25.1 million, bringing its cumulative worldwide tally to $38.8 million.

The cartoon duo’s box-office triumph was especially impressive considering that it was also rolled out on the HBO Max streaming service simultaneously, leading to hopes that the worst of the past year’s box-office slump may finally be ending, now that people are getting vaccinated at greater rates and more cities are finally making plans to reopen theaters. In fact, New York Governor Andrew Cuomo recently announced that theaters in New York City would be allowed to operate in limited capacity beginning on March 5.

Finishing in the runner-up spot was Universal and DreamWorks’ The Croods: A New Age, which pulled in $1.2 million in its fourteenth week in theaters. The surprise PG-rated animated hit, which has managed to stick around at or near the top of the charts for three-and-a-half months, dipped -29.6% from the previous frame and scored a $632 per-screen average in 1,912 theaters. Its North American total is now $52.4 million. To date, it has added another $103.7 million from international territories, putting its worldwide total at $156.1 million.

In third place was Warner Bros.’ The Little Things, which tacked on $925,000 in its fourth week of release. The R-rated crime thriller starring Denzel Washington slipped -22.9% from the previous weekend. The film earned a $499 per-screen average in 1,853 theaters. Its five-week domestic total is $12.9 million. Overseas, The Little Things has added $10.3 million so far, bringing its total worldwide box office gross to $23.2 million.

In fourth place was yet another Warner Bros. title, Wonder Woman 1984, which pulled in $710,000 in its tenth weekend. The Gal Gadot-led superhero sequel, whose total domestic gross now stands at $43.6 million, shed -11.8% from the prior session, scoring a $462 per-screen average in 1,534 theaters. The PG-13-rated DC Comics title has fared far better overseas, where it has lassoed $117.4 million so far, bringing its cumulative global box office to $161 million.

Rounding out the Top 5 was Liam Neeson’s The Marksman, which put $700,000 in its cross-hairs in its seventh weekend in theaters. The PG-13-rated border thriller from Open Road Films dropped off -10.5% from last week, nabbing a $433 per-screen average in 1,614 theaters. The aging action hero’s latest outing has pulled in $12.3 million domestically and a little over $3.9 million abroad, bringing its worldwide total to $16.3 million.

Still, the biggest takeaway from Tom and Jerry’s robust opening and the continued success of The Croods is that kid-friendly films are clearly the biggest theatrical attraction during the ongoing global health crisis. With young movie fans suffering from cabin fever and stir-crazy parents looking for any excuse to get out of the house, animated titles are the hottest ticket at the moment. If Tom and Jerry can stick around in theaters as long as The Croods, it will be one of 2021’s early success stories. The trend should also bode well for Disney’s Raya and the Last Dragon, which arrives in theaters (and on Disney+) next weekend.