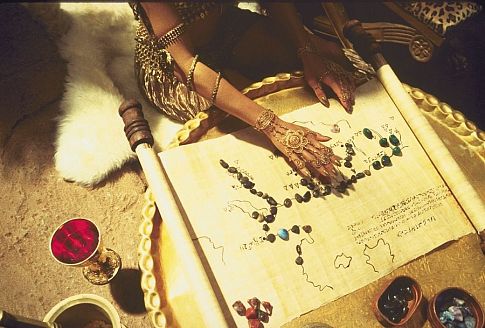 'Scorpion King' Channels 'Conan the Barbarian' for Box Office Success
April 19, 2002 0:53 PDT - By Brandon Gray - Box Office News
The summer movie season gets an early start with the release of Universal Pictures' The Scorpion King, starring wrestler-turned-actor Dwayne Johnson. Or is it really that The Scorpion King is opening early, because it couldn't cut it versus Spider-Man and Star Wars and the other big guns of the summer? Most likely the latter, but that hasn't stopped Universal from waging a monumental marketing campaign in support of the Mummy spin-off.

Based on The Rock's extended cameo from The Mummy Returns, The Scorpion King cost a relatively modest $60 million to make, a surprise given the longtime rumors that it was a troubled production that required extensive re-shoots to make releasable. It marks a departure from the effects-driven horror and Indiana Jones-style adventure of the franchise, favoring the sword-and-sandal combat of Gladiator or Universal stable mate Conan the Barbarian.

Universal has actually taken a page from Conan the Barbarian in a number of ways, which is understandable given the obvious similarities between The Scorpion King and the movie that put Arnold Schwarzenegger on the cinematic map. Genre and plotline aside, both Schwarzenegger and The Rock were muscle-bound personalities making the transition from sports—body-building and wrestling respectively—to movies.

Conan struck theaters on May 14, 1982, kicking off the summer season early just like Scorpion King. Back then summer didn't start until Memorial Day weekend. Nonetheless, Conan enjoyed a muscular $9.5 million opening from 1,358 theaters, which would equal over $18 million today, adjusted for ticket-price inflation. It went on to conquer $39.6 million by the end of its run, the equivalent of $76 million today.

The Mummy unwrapped $43.4 million from 3,209 venues on its first weekend back in May 1999, reaching $155.4 million. Featuring The Rock prominently in its marketing materials despite his short appearance in the movie, The Mummy Returns bowed to $68.1 million from 3,401 theaters last May, unearthing $202 million total. However, The Scorpion King's ads don't make the Mummy connection, leaving it to audiences to put two and two together. If they do, they may remember how The Rock was a bad guy in Mummy Returns and they his character ultimately became a cheesy CGI monster.

Attempts to start the summer earlier than the first week of May have usually failed (Volcano anyone?), and historically the sword-and-sorcery genre has disappointed more often than not. Then again, The Rock as the most popular wrestler around has a sizable fanbase. Young males, which Scorpion King unabashedly courts, have not been served for a number of weeks. What's more, Universal has been responsible for some of the biggest April openings in the past, including Life ($20.4 million) and U-571 ($19.6 million), and has backed the picture with exciting ads and trailers.

Storming onto a whopping 4,904 screens at 3,443 theaters, The Scorpion King could sting the top spot with around $36 million, the biggest April opening ever and much better than Universal's last stab at the genre, 1997's Kull the Conqueror, which grossed $6.1 million in its entire run.

The ads for Murder by Numbers boast that it's "from the director of Single White Female." A marketing campaign must be desperate when it has to reference a thriller that had a mixed reaction ten years ago.

When they're not grasping at straws, the ads offer such awkwardly phrased voiceovers as "Between two killers and one detective, the mind games begin April 19."

Then, of course, there's the groaner of a catch phrase uttered by star Sandra Bullock: "The profile doesn't fit the profile!"

Clearly, this is another winning campaign from Warner Bros, the studio responsible for Showtime and Death to Smoochy among others. It's too bad, because Murder by Numbers had a bankable premise as far as thrillers go—a battle of wits between a strong female detective and two homicidal teenagers.

There's been at least one thriller a week for the past three weeks—Panic Room ($30.1 million opening), High Crimes ($14 million), Changing Lanes ($17.1 million) and Frailty ($4.2 million)—suggesting that the marketplace may be over-saturated with the genre. That's something Murder by Numbers may not be able to surmount, especially since it doesn't seem to have been given the full court promotional press.

Bullock is a consistent draw. Her past six starring roles opened to $13 million on average, and all were in the double digits. However, Murder by Numbers finds her straying from her usual comedy and chick flick fare, its closest antecedent in her filmography being 1995's The Net, which caught $10 million in its opening ($13 million adjusted).

Investigating 2,663 locations, Murder by Numbers might uncover around $10 million this weekend.

Among holdovers, the Samuel L. Jackson-Ben Affleck road rage drama Changing Lanes, which charged into the top chart with a surprising $17.1 million last weekend, should cool 40% to $10 million, due to mixed audience reaction despite its strong critical reception. Still, that may be good enough for second place.

Click here to view the specific predictions for the top 10 movies.

The same frame last year was a typically anemic April weekend. Bridget Jones's Diary entered 610 more theaters for a total of 2,221 and claimed the top spot with $10.2 million in its second outing en route to $71.5 million. Crocodile Dundee in Los Angeles swung into fourth place with $7.7 million from 2,123 venue, ending up with $25.6 million, a fraction of its '80s predecessors. The Razzie-winning Freddy Got Fingered plopped into the No. 5 spot with $7.1 million from 2,271, fizzling out at $14.2 million.