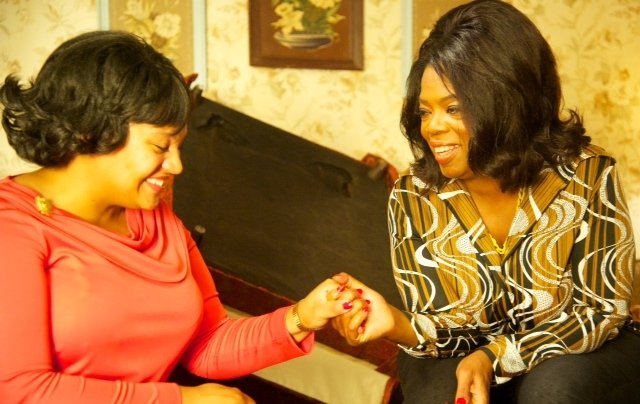 Weekend Report: 'Kick-Ass' Gets Butt Kicked by 'Butler'
August 18, 2013 13:43 PDT - By Ray Subers - Box Office News
Thanks to its strong appeal among neglected adult audiences, Lee Daniels' The Butler easily took first place at the box office this weekend. Meanwhile, Kick-Ass 2 opened well below its predecessor, while Jobs and Paranoia both bombed.

The Top 12 earned $121.4 million, which is off five percent from the same weekend last year when The Expendables 2 ruled the box office.

Playing at 2,933 locations, The Butler opened to $24.6 million. That's a bit lower than The Help ($26 million), which opened in August 2011 and also dealt with the African-American experience during the civil rights movement (The Help also burned off some demand with a Wednesday debut). The Butler was also a bit stronger than Eat Pray Love and Julie & Julia, both of which were August releases targeted at adult audiences.

The Butler's success can first-and-foremost be attributed to strong scheduling. August has historically been a great time to release movies like this: after a season filled with CGI spectacle geared at young males, there's a ton of pent-up demand among older women. At the beginning of the Summer, The Weinstein Company recognized that there was nothing to fill this demand, and shrewdly decided to move The Butler up from October. They also did a nice job marketing the movie: ads emphasized the movie's inspirational "based on a true story" qualities, while Oprah Winfrey's relentless publicity tour helped raise awareness among the movie's key demographic.

The movie received an excellent "A" CinemaScore, and without any significant competition it should play well for the next few weeks. If it really hangs on, it could wind up over $100 million, though it would be shocking if it had the kind of long-term playability that got The Help over $160 million.

In second place, We're the Millers added $18 million this weekend. That's off just 32 percent from its opening, which is a better second weekend hold than past Summer 2013 comedy hits This is the End (down 36 percent) and The Heat (down 37 percent). The Jennifer Aniston/Jason Sudeikis comedy is clearly receiving strong word-of-mouth, and is well on its way to over $100 million total (it's banked $69.7 million so far).

Elysium narrowly took third place ahead of Planes and Kick-Ass 2. The Matt Damon sci-fi flick fell 54 percent to $13.7 million, and through 10 days has earned $56 million. It currently trails District 9 by around $17 million, and officially has no chance of reaching $100 million.

2010's Kick-Ass may have built a following on home video, but that didn't translate in to stronger attendance for the sequel. To the contrary, Kick-Ass 2 only opened to $13.3 million, which is way below the first movie's $19.8 million debut. It's also only a bit ahead of fellow Universal Pictures comic book adaptation R.I.P.D., which bombed earlier this Summer with $12.7 million.

The first Kick-Ass has been portrayed as a cult hit that wasn't fully appreciated during its theatrical run, though in reality Lionsgate did a great job getting the message out about it back in 2010. The movie looked fresh and fun, and did well-enough for a superhero comedy (a genre with a poor track record). By nature of being a sequel, Kick-Ass 2 lost many of the first movie's advantages, and on top of that the marketing did almost nothing to differentiate it. As a result, Kick-Ass 2 had a steeper drop in attendance than recent sequels like Red 2 and The Expendables 2.

Kick-Ass 2's audience was 63 percent male and 58 percent under the age of 25. They awarded the movie a "B+" CinemaScore, which doesn't really give a good indication on word-of-mouth. Regardless, the first movie did have good word-of-mouth, but still plummeted coming off opening weekend; if the same thing happens for Kick-Ass 2, its final total will be just over $30 million.

Percy Jackson: Sea of Monsters dipped 39 percent to $8.75 million for a new total of $39.3 million. Ultimately, the movie will make significantly less than its predecessor at the domestic box office ($88.8 million), though it should make up that gap thanks to overseas earnings.

Playing at 2,381 locations, Jobs opened in seventh place with $6.7 million. While it was never expected to match The Social Network, it's still very disappointing to note that the Steve Jobs biopic earned less than one-third as much as the Facebook story. This is also one of star Ashton Kutcher's lowest openings ever—among nationwide releases, it's only ahead of 2003's My Boss's Daughter ($4.9 million).

Jobs had plenty of issues, including awful reviews and a comedy star playing dramatic (almost never a good idea). Most important, though, was the movie's apparent tonal issues: while plenty of people enjoy their Apple products, the deification of Steve Jobs is a bit of a turn off. Jobs received a weak "B-" CinemaScore, and all indications are that it will disappear from theaters quickly.

While Jobs had a very weak debut, it wasn't the biggest loser this weekend: that honor goes to Paranoia, which opened in 13th place with just $3.5 million. It joins the ranks of other Relativity Media bombs like The Warrior's Way ($3.05 million) and Take Me Home Tonight ($3.46 million), and it's also makes it the lowest nationwide opening of the Summer ahead of Tyler Perry Presents Peeples ($4.6 million).

This awful debut isn't all that surprising: Paranoia was very lightly marketed, and the stuff that did get out was vague and unappealing. The movie received terrible reviews (just four percent fresh on Rotten Tomatoes) and audiences seem to dislike it as well ("C+" CinemaScore). This all suggests that the movie will drop off quickly, and it should become star Harrison Ford's lowest-grossing nationwide release ever.

Blue Jasmine expanded to 229 locations this weekend and added $2.29 million (about even with last weekend). It's now earned $9.42 million, and is set to expand nationwide next weekend.

Elysium expanded in to a handful of major markets and took the top spot at the overseas box office this weekend. According to Sony, it opened ahead of District 9 and Pacific Rim in all eight of its new European territories, which includes France ($4.1 million), Spain ($3.3 million) and Germany ($3.2 million). It was also ahead of District 9 and Pacific Rim in Australia ($3.2 million). To date, it has grossed $37.7 million, and is set to expand in to the U.K. next weekend.

Playing in 36 territories, Percy Jackson: Sea of Monsters earned $21.5 million. It had a strong $3.9 million start in Brazil—that's fourth-highest ever for 20th Century Fox—and was also solid in France ($3.6 million) and Germany ($2.1 million). The movie's early total is $36.3 million, and it's reasonable to expect it to ultimately pass the first movie's $138 million total.

Pacific Rim added $20 million this weekend. Most of that came in China, where the movie dipped 25 percent to $14.6 million. This was enough to get the movie past $100 million there, which makes China the movie's highest-grossing territory ahead of the U.S. Overall, Pacific Rim has grossed $286 million overseas, and it should get past $300 million in the next week or two.

Without any significant openings, The Smurfs 2 earned $20 million for a new total of $150 million. The movie is doing well enough so far, but it's ultimately not going to get anywhere close to the first movie's $421 million total.

Worldwide sensation Despicable Me 2 added $19.5 million this weekend for a new total of $435.2 million. It took first place in Russia with $12.2 million, which is Universal's second-best opening ever there. The movie still has South Korea, Japan and Italy on the way, and is on pace to close over $500 million.

This weekend, The Wolverine passed X-Men: First Class at the foreign box office, where it has so far banked $214.8 million. It will become the highest-grossing X-Men movie ahead of The Last Stand ($225 million) by next weekend, and it still has plenty of money left to earn when it finally expands in to Japan on September 13th.

Domestic hit We're the Millers opened to $10.6 million from 13 overseas markets this weekend. Including previews, it earned $6.8 million in Russia, and was also strong in Australia ($2.3 million). The comedy reaches the U.K. next weekend before expanding in to most other major markets through September.

Planes opened to $7.3 million in nine markets this weekend. It debuted in the U.K. ($2.9 million) and Spain ($2.4 million); while the Cars spin-off isn't reaching Pixar levels, these figures are solid in its own right.

Coinciding with its domestic debut, Kick-Ass 2 opened to $6.3 million from 17 markets this weekend. Most of that came from the U.K., where the movie opened in second place with $4 million. The first Kick-Ass earned $48 million overseas, which is a figure this movie should ultimately exceed.