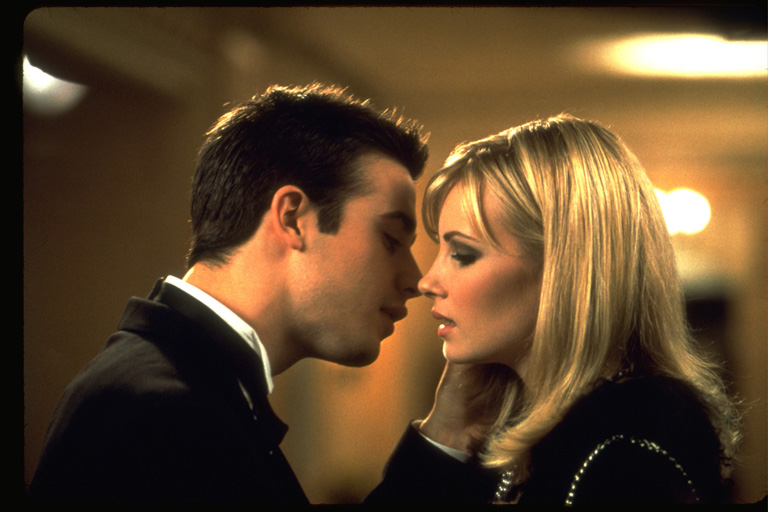 Believe it or not, people actually flocked to a movie starring Freddie Prinze Jr., the teen idol who's name had become synonymous with bomb after starring in such movies as Head Over Heels and Summer Catch. Meanwhile, Matt Damon bounced back in a big way after duds like All the Pretty Horses and The Legend of Bagger Vance, while Nicolas Cage wasn't as fortunate, suffering more World War II woes after his last picture Captain Corelli's Mandolin.

Scooby-Doo, starring Prinze, Sarah Michelle Gellar and Matthew Lillard, turned out to be more like The Flintstones than The Adventures of Rocky & Bullwinkle.

Appealing to kids and nostalgic adults alike, Warner Bros.' live-action and CGI adaptation of the cowering canine addicted to Scooby Snacks scarfed down $54,155,312 at 3,447 theaters, $2,260,000 less than the studio's estimate on Sunday. The estimate had the picture besting Austin Powers: The Spy Who Shagged Me's $54,917,604 as the biggest June opening ever, but it ended up just shy of that record.

Of course, it may have helped that Prinze, who plays Fred, was barely featured in the movie's marketing campaign, and only as the subject of derision when he was seen. At the end of the movie's trailer, Scooby disguises himself as an old lady at an airport terminal, to which Gellar as Daphne says "Oh my God. No one is stupid enough to believe that." Then Prinze asks Shaggy (Lillard), "Who's the ugly old broad?" Cut to a scene on the plane where Scooby-in-drag punches out Prinze.

Instead, the campaign wisely focused on the relationship between Scooby and Shaggy, uncannily impersonated by Lillard. "Who's your best buddy?" Shaggy asks in what's intended as a special moment about their comradery. "Raggy?" Scooby responds. "That's right," Shaggy says. "And who's my best buddy in the whole wide world?" Scooby replies "Scooby-Doo," after a slight pause.

Though the TV show originally premiered in 1969, new generations had been exposed to it as it has ran almost uninterrupted for decades. In recent years, the Cartoon Network has been playing it, and videos the WB has been issuing have posted strong sales. Scooby might not have done so well too, if it weren't for those meddling kids. Children's movies have been on an unprecedented winning streak, with business ranging from very good to blockbuster across the board since the release of Monsters, Inc. last November.

Last November, the WB attached the Doo teaser to Harry Potter, and, in turn, attached the teaser for the Potter sequel to Doo, feeding the frenzy for the fraidy-cat pooch. Potter's $90,294,621 start stands as the WB's biggest, but Doo now ranks No. 2 for the studio.

Scooby-Doo's bow-wow also stands as the most prodigious ever for a cartoon adaptation, topping the $29,700,000 of 1994's The Flintstones, or about $41 million today adjusted for ticket price inflation. The Bedrock residents went on to gross $130,531,208, which would adjust to about $178 million today. What's more, Scooby marks the first successful cartoon adaptation since 1997's George of the Jungle.

"When ghosts say boo, just say Doo," the slogan reads in the movie's trailer. That's funny, because when filmmakers say Doo, critics say Boo. Scooby achieved its level of success despite a CGI dog that many believed looked more like beef jerky (and worse) than the titular pooch from the cartoon. On the review-tracking site Rotten Tomatoes, 74% of critics dissed the new Doo, meriting a "Rotten" rating. Audiences, though, gave the picture an overall grade of A- and those under the age of 21 gave it an A, according to CinemaScore, which polls the reactions of opening night moviegoers.

That CGI dog reportedly accounted for a quarter of the movie's $84 million budget, or about as much as one would pay for the services of a Tom Cruise or a Julia Roberts. Though Doo doesn't command the backend participation that they do.

Turns out more than rogue CIA agents were after Jason Bourne as audiences rushed out to see The Bourne Identity, based on the late Robert Ludlum's 1980 novel of the same name. The $60 million Euro-spy thriller starring Matt Damon and Run Lola Run's Franka Potente took off with $27,118,640 at 2,638 venues, filling the June action niche that has been the breeding ground in the past for such unlikely action heroes as Keanu Reeves (Speed) and Nicolas Cage (Dwayne Johnson).

Damon enjoyed the biggest opening of his career as a headliner, going more than toe-to-toe with his buddy Ben Affleck's CIA flick The Sum of All Fears, especially considering that Damon bore Bourne practically on his own, whereas Affleck had Morgan Freeman and Tom Clancy's help.

Universal mounted an energetic ad campaign, highlighted by some spectacular, non-CGI action set pieces. Promoted as being from the director of Go and Swingers (Doug Liman), Bourne actually made more money in its first weekend than those two movies did in their entire runs combined, even when adjusting for inflation.

"My hats off to the marketing department, who made it look fresh and hip in an environment of tent poles," extolled Nikki Rocco, Universal's head of distribution, adding that the studio had expected an opening in the high teens to $20 million.

The audience was split evenly between the genders, and 45% were under the age of 30, though the latter figure may not be completely accurate as it was based on the studio's exit-polling for Saturday, which tends to skew older. Rocco noted the picture's hefty $8,890,000 Friday as a sign that younger moviegoers were coming out in droves as well.

Expect The Bourne Supremacy, based on the second book in Ludlum's trilogy, to get the greenlight soon as a new movie franchise has been born.

Nicolas Cage and Adam Beach may have saved a lot of Marines in Windtalkers, but they couldn't save MGM from its fourth high profile disappointment in a row after Bandits, Rollerball and Hart's War, nor could they avoid the curse of the movies postponed because of Sept. 11, following Collateral Damage, Big Trouble and Bad Company.

Its audience skewing male (56%) and over the age of 25 (two-thirds), director John Woo's World War II epic couldn't break the code for box office success, posting $14,520,000 at 2,898 theaters for the weekend. While that would be a solid number for an average movie, the picture reportedly cost $115-120 million to make—including $2 million in interest from the delayed release. MGM, though, covered $30-35 million of that prior to release by selling rights in Japan, France and Italy, reducing their exposure to about $80 million.

Originally scheduled as a June 29, 2001 release, it was later bumped to November 9, 2001 before settling on June 14, 2002 in the wake of Sept. 11. Had it stuck with the November date, it would have been the first war movie to tap into the nation's heightened patriotism in a marketplace that would soon become over-saturated with the genre after Behind Enemy Lines, Black Hawk Down, Hart's War and We Were Soldiers. The attempts to strike that patriotic nerve at this point come off as "me-too"-ism since the other war pictures used a similar marketing strategy.

Instead of going with a consistent theme, Windtalkers used a barrage of different slogans such as "Discover the secret that changed the course of history" to "This summer, America has the last word," as the music from Gladiator swelled behind it. The TV spots ranged from the inspirational to hard rockin' action, replete with silver titles coming out of a firestorm.

One oddity was the use of the "Protect the Code" scene involving Cage and Jason Isaacs, a war movie veteran of Black Hawk Down and The Patriot. Isaacs' voice seemed to be different in each ad, even changing in the middle of some commercials from a gruff American accent to something closer to his native British.

Ever since The Rock, Cage has been a June action staple, including his first collaboration with Woo—the $112,276,146-grossing Face/Off. However, Cage's last and only other World War II flick Captain Corelli's Mandolin—also long delayed—failed to strum a lucrative tune, earning just $25,543,895 last summer.