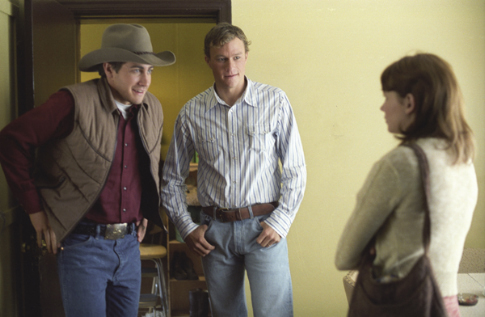 Director Ang Lee's cowboy love story rambled into three locations in New York City, one in Los Angeles and one in San Francisco and rustled up the highest per theater average on record for a live action movie.

Brokeback Mountain corralled $547,425 over the weekend, or a potent $109,485 per site. The average ranks ninth overall among the top weekend averages since 1982, behind animated features including The Lion King and Pocahontas. Adjust for ticket price inflation, and only Evita and Edward Scissorhands inch ahead among live action pictures, although each played at two venues where high averages were easier to achieve.

Distributor Focus Features' president of distribution, Jack Foley, reported that The Grove in Los Angeles, where Brokeback Mountain is showing on three screens, was the picture's highest-grossing venue. The New York theaters were each over $100,000, while the Embarcadero in San Francisco was over $80,000, according to Foley.

"It's overwhelming, basically," said Foley. "From what we understand, the sell outs began mid-afternoon. We had a good representation of males as well as females, and people from 35 years old to seniors." Foley added that women will be the key to the picture's future success.

"Our biggest problem is going to be exhibition," Foley noted. "Brokeback Mountain's not ready [to expand widely]. I don't want to go up against King Kong any more than I am. We have to play to our strengths. Exhibitors are going to be in it for the quick money. We're in it for the long run. We have a film that needs very careful management."

According to Foley, the next wave of aggressive expansions will start on Jan. 6 with a plan to be at more than 300 theaters by Jan. 27, right before the Academy Award nominations are announced. Foley noted that the picture could go wider before then depending on how it is received in the meantime.

Also in limited release, Memoirs of a Geisha attracted $682,504 from eight venues in Los Angeles, New York City, San Francisco and Toronto. Its $85,313 per theater average ranks behind only Brokeback Mountain for the year. Distributor Sony's exit polling suggested that 57 percent of the audience was female and 57 percent was under 35 years old. The studio plans to expand the period drama to over 50 theaters on Friday, followed by a nationwide release on Dec. 23 at over 1,000 venues.

• All Time - Highest Per Theater Averages

NOTE: This report was originally published on Sunday, Dec. 11 and was updated on Monday, Dec. 12 with actual grosses.