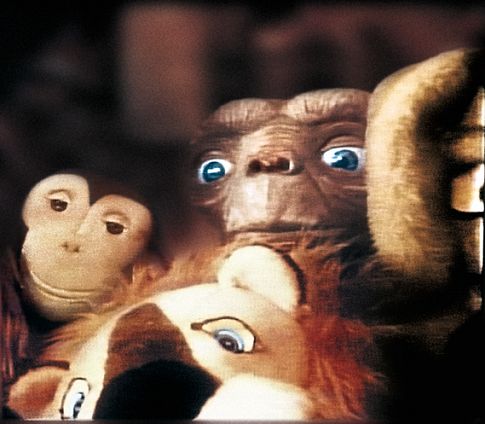 1967 Revisited; Widmark Dies
April 4, 2008 0:53 PDT - By Scott Holleran - Columns
Burbank, California—Three recent movie-themed books are either instructive or indispensable. Leonard Maltin's annual Movie Guide contains a wealth of data from an independent-minded source who not only loves movies—he loves to know about movies, a claim few can credibly make.

Inside Inside by James Lipton, creator, executive producer, writer and host of Inside the Actors Studio, an excellent program on Bravo, recounts several movie moments culled from his impeccably researched interviews. One with Steven Spielberg explains why he tends to use a short lens—he likes master shots—and how he told young Henry Thomas he would never see E.T. (the extra-terrestrial) again during his chronologically, continuously shot 1982 smash, E.T..

A glaring error by publisher Dutton: the decision not to include an index. Whether Lipton's reminiscing about producing President Carter's inauguration or Bob Hope's 75th birthday for television, Inside Inside is full of facts that should have been sorted.

Pictures at a Revolution by Mark Harris is a well-informed examination of Oscar's five Best Picture nominees for 1967—when classic Hollywood gave way to a new aesthetic—which were: The Graduate, Bonnie and Clyde (pictured on the jacket cover), Doctor Dolittle, Guess Who's Coming to Dinner, and, the winner, In the Heat of the Night.

One need not agree with what former Entertainment Weekly staffer Harris makes of these hugely influential movies to gain from his accounts of each picture, all released during some of our darkest days—the late Sixties—when everything American seemed held in contempt by prevailing intellectuals.

Harris taps those times—40 years after an electrifying black man captivated the country (before he was smeared by the New Left) in three artistically and financially successful movies (To Sir, With Love, Guess Who's Coming to Dinner and In the Heat of the Night). Harris traces Hollywood's new arrivals—Robert Benton, Mike Nichols, Warren Beatty—and he signals grand departures, such as Katharine Hepburn's, bowing gracefully while chiding feminism by explicitly embracing her role as an upper middle class wife, or Miss Hepburn's Oscar-nominated co-star, Beah Richards, shellshocked at the assassination of Martin Luther King, Jr. on the eve of the Academy Awards. Hollywood lost its brightest in the muck of modern movies. Harris, while toasting the demise and doing so with some distortion, catches that sense of loss.

Harris closes the breathless, infuriating Pictures at a Revolution with the words of a lone, black assimilationist who'd been attacked by college-bred leftists for being too bourgeois (though liberal Harris doesn't put it that way)—Sidney Poitier, telling a reporter shortly before In the Heat of the Night was released that he had done his best to portray the American Negro in a positive light: "I guess I was born out of joint with the times," he said, adding, "I have not made my peace with the times. They are still out of kilter. But I have made my peace with myself."

It has been four decades since movie stars Hepburn, Wayne, and Day—and, during what should have been his dawn, Sidney Poitier—were all but pushed aside for what came later, much of it smut, sludge and nonsense. People treasure Wayne, Day, and Hepburn, if not much of what has been on screen since.

As for Mr. Poitier, reality is the reward, a fact left out of Mark Harris' epilog to 1967, though he does include that, in one of its Sunday editions that year, the New York Times allowed a left-wing writer to describe Sidney Poitier as a "showcase nigger". Mr. Poitier now sits on the board of one of Hollywood's top studios and his three 1967 movies are better than most movies released then or since.

One of Sidney Poitier's co-stars, actor Richard Widmark, recently died. He was 93. Known for tough roles, he showed range, too, as a bitter, racist thug refusing to be treated by Mr. Poitier's doctor in No Way Out; as heroic Jim Bowie, fighting beside the men of the Alamo in John Wayne's 1960 picture of the same name; as a victim of Marilyn Monroe's stalking in Don't Bother to Knock; as a doctor fighting to save New Orleans from the plague in Elia Kazan's Panic in the Streets—and, crucially in a movie that hinged on his small role, as the angry American Army colonel prosecuting Nazis in Stanley Kramer's Judgment at Nuremberg.

Mr. Widmark, a familiar figure in war movies and Westerns, did not hold Hollywood in high esteem in his later years. The actor—who'd been rejected by director Henry Hathaway (True Grit) as being too intellectual—told a British newspaper in 1995: "The businessmen who run Hollywood today have no self-respect. What interests them is not movies but the bottom line. Look at Dumb and Dumber, which turns idiocy into something positive, or Forrest Gump, a hymn to stupidity," he observed, adding, "'intellectual' has become a dirty word."

The soundtrack for My Blueberry Nights is worth a listen. Fourteen songs include a tune sung by Norah Jones, who makes her motion picture debut in the Weinstein Company release, which is directed and produced by Wong Kar Wai, whose foreign 2046 was incomprehensible. My Blueberry Nights opens this week. The album includes songs by Ry Cooder, Brokeback Mountain composer Gustavo Santaolalla, and a haunting cover of Neil Young's "Harvest Moon."

• Commentary: Katharine Hepburn: A Woman for All Seasons

• Book - Pictures at a Revolution