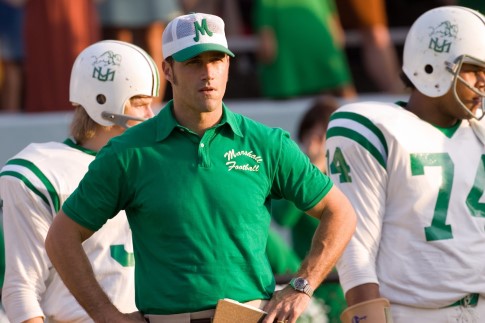 Grief Recovery Through Football
December 22, 2006 20:11 PST - By Scott Holleran - Movie Reviews
In We Are Marshall, a tour de force sports drama instilled with an unwavering sense of purpose, a director who goes by the term McG has crafted an emotional movie with real power. Take the wife, take Mom, take the team—do not miss this redemptive treat. It is a winner.

More precisely, it's about becoming a winner, after you've been hit so hard by grief and tragedy you can hardly see straight. What might have been a formulaic football picture—based on a true story—zooms in on mens' eyes as the windows of their souls, contrasted by small, intimate details and important historical angles and scores an honest, direct dramatization of an athletic principle: winning is everything.

When a West Virginia university's football team and half the town is incinerated in an airplane crash on Nov. 14, 1970, the college town crowd goes numb and the football department goes blank. McG, with writers Jamie Linden and Cory Helms, grasps both the nature of the story's dominant emotion, grief, and the nuances of history. That's a rare combination in today's docudramas.

At the moment the DC-9 goes down, town and team have been clearly established as inextricably linked. There's the coach (Robert Patrick), the quarterback, the teammates, the college president (David Straithairn), the big shot father (Ian McShane), the assistant coach (Matthew Fox), the cheerleader (Kate Mara) and an incredibly well-equipped cast of people who come alive and make a steel town seem for two hours like the only place on earth.

No one personifies that better than Nate, (Anthony Mackie), who won't let go of what matters in his life: football. After Nate dredges up some team spirit from among the walking wounded—in a town that also lost its best minds—along comes Matthew McConaughey as a corny and lovable dad who happens to coach football. Taking a job no one else will, the new coach starts quoting housewife tips from Redbook and upsetting the pervasive sense of doom that hangs over this stretch of the Ohio River.

The simple story unfolds through adroit pacing in strong characters captured by excellent actors, including seasoned McShane as the closest this character study has to a villain, Brokeback Mountain's Mara as his dead son's girlfriend and McConaughey as an inward fellow—think Columbo in tube socks—who looks to children and concretes in reality for strength and resolve and grace.

But the standouts are Fox as the assistant coach whose story arc best expresses the agony of a decimated town and college, Mackie as inconquerable Nate and Straithairn as the unlikely lighthouse in the storm, a strong mind to shelter the strong but hurting young bodies that must learn to recover that which they love.

McConaughey's coach drives the team with slogans and spunk and the hard work of showing up when everyone else is determined to be down, doing what it takes when it takes losing, recruiting and stoking young men into a squad that takes the field. We Are Marshall is less about football than it is about cultivating a unity of purpose. If it doesn't get you in the gut, there's ice in your veins. These men feel, cry and triumph. McG lets them rip.

He also deploys important tools and tender moments—a spinning football in flight to symbolize perfection, a rotary telephone to indicate interminable waiting, a low, groaning invitation to "grab glory"—and if it's over the top at times, that is the spectacle which is football.

The sport is shorted screen time but it's suggested in images with tape, lace and helmet and in key plays. Somehow, using one of the year's best casts, string music, real clips with Monty Hall and John Chancellor, McG evokes the actual, difficult days between a heavy loss and a short gain—what one character calls a "weekly reminder of what we lost"—and comes up with the true, transformative spirit of winning.