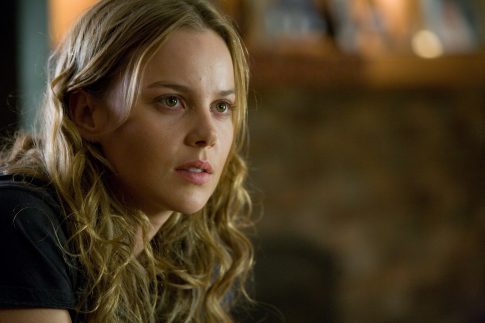 Iraq Military Drama Humanizes the Loss
March 25, 2008 17:41 PDT - By Scott Holleran - Movie Reviews
Paramount's Stop-Loss is overdone but pointed, the type of topical war drama Hollywood used to make for television, (Carol Burnett's searing 1979 Vietnam War picture, Friendly Fire, comes to mind). Because it's made by attention-deficit Music Television (MTV), which assumes everyone under 30 has the patience of a puppy, Stop-Loss doesn't rise to that level of quality.

Writer and director Kimberly Peirce's follow-up to Boys Don't Cry, co-written by magazine writer Mark Richard, hits home as a sort of companion piece to the talky but incisive Lions for Lambs. The clichéd Stop-Loss is showy but incisive and, with five years of troops in Iraq and more Americans killed there than were wiped out by the enemy on 9/11, her sophomore effort is superior to the pretentious previous attempts in these ranks.

Opening in Tikrit with a band of Army soldiers listening to a guitar-playing buck named Tommy (Joseph Gordon-Levitt), Stop-Loss starts, daring you to watch fresh-faced young men do their best to accomplish an unattainable goal: helping others while passively waiting for them to attack—never acting in offense. When a car packed with headscarfed women pulls up to a security checkpoint—see how you feel and ask how you would judge and do it in something like three seconds flat.

Stop-Loss induces that sense of prolonged paralysis, dramatizing the contradiction of forbidding our troops from firing upon civilians when necessary while under orders to extricate hostile citizens in brief outbursts. The first battle demonstrates how the soldiers are hogtied in a way that would infuriate America's greatest generals.

When steady, decisive Brandon Leonard King (Ryan Phillippe) takes his men after a bunch of the beasts, it's an unwinnable trap set in advance and we know it—heck, they know it—because U.S. Armed Forces are deprived of the weapons for victory: a purpose based on self-interest and the rules of engagement to achieve it.

The soldiers track insurgents down, tearing apart buildings and neighborhoods, fanning flames and making matters worse by being required to return to a passive posture, only to risk being blown to bits another day. To what end? For an answer, Stop-Loss comes back to the U.S.A., as if to provoke Americans to do what the movie's title says by demanding withdrawal from Iraq.

No matter how overcooked it gets—and it boils over quickly—Miss Peirce's MTV-ish brotherhood of Texas-bred soldiers manages to convey that this war is, and will indefinitely continue to be, a deep, abiding loss. Depression, alcoholism, abuse, suicide—all await those who survive and those who love them. Tommy, Brandon, Steve (Channing Tatum); each suffer from post-traumatic stress disorder. During leave in the Alamo state, they try to reconnect.

The men support each other 100 percent. When Brandon rambles during a welcome home speech, Steve steps up. When Steve has a flashback, Brandon watches over him. When Tommy explodes on a jerk that mocks his service, Brandon's there to soothe the rage.

The Texas town represents a nation that buries its head in the sand rather than face the consequences of a wrong war—a war, in fact, that Congress and the President did not declare, leaving a loophole which grants the government unlimited power to put enlisted soldiers back to sitting-duck status at random: stop-loss. When by-the-book Brandon gets stop-lossed, he does something radical: he decides to get lost.

Road-tripping with Brandon toward presumed pardon on Capitol Hill—the movie's most unrealistic aspect—Michelle chooses to seek answers. She wants to know, asking aloud at one point, as if to herself, as war-torn women (now, also men) have been known to do, "how did these men wind up like this?"

Brandon, too, begins his journey with a logical question, demanding from his commanding officer how he knows what he claims to know. Brandon and Michelle make up their own minds—speeding over bridges across America—yet they, like the country, feel like their futures are predetermined by this particular foreign entanglement. Characters do not really debate foreign policy—they don't have to—the rule defines their lives and speaks for itself.

Stop-Loss is alternately too superficial or too earnest, draining or drenching certain scenes. Brandon's and Michelle's enlightenment—Tommy's spiral—Steve's re-enlistment—each are missing key connections. The road trip takes too long, the car's too conspicuous and the whole country resembles Texas. A climactic altercation is over-the-top.

But, here, too, Miss Peirce (whose half-brother apparently serves in Iraq) strives to recreate the anguish of America's soldiers in raw, physical action and her Stop-Loss reminds us that the homefront is the intellectual battlefield. America's enlisted forces have pledged to honor this cause—a self-fulfilling cycle, as the movie shows—but whether to stop the mounting losses is up to each American.