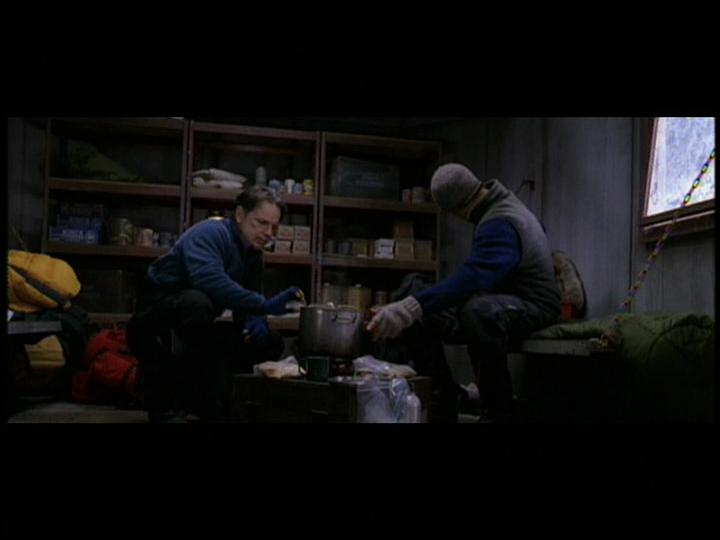 Stranded Sled Dogs Make for Gripping Tale
February 18, 2006 13:30 PST - By Scott Holleran - Movie Reviews
Grab anyone who's ever had or wanted a dog and go see the huskies of Eight Below, the winter adventure based on a true 1957 story, which was made into a Japanese motion picture in 1983. This gripping serial about a team of sled dogs marooned in Antarctica after a harrowing snowstorm rescue bounds, pulls and tugs as the dogs steal the spotlight.

With a nod to classic Walt Disney pictures such as Swiss Family Robinson and Third Man on the Mountain, Eight Below delivers solid nature-based conflict—grounded in reality, not in computer-generated surrealism—with human characters, led by a handsome, blue-eyed hero (Paul Walker), and the most beloved lost dogs since Benji and Lassie.

Child and adult alike will be spellbound—not plunged into a blood-curdling video game—if they have the brainpower and attention span to focus on a simple, goal-oriented mission about a man (Walker) and his dogs, aided by his spiky-haired pal (Jason Biggs), a female pilot (Moon Bloodgood) and a research scientist (Bruce Greenwood).

It's an alliance formed in brutally weathered conditions when Greenwood's explorer shows up at the South Pole base to find a meteorite on an icy mountain. Guided by Walker and his eight dogs, against Walker's better judgment, the pair sets out and gets into a heap of trouble.

With stunning photography by Don Burgess—a Robert Zemeckis favorite whose work can be seen in the Back to the Future series and in The Polar Express—man glides across the glaciers pulled by a band of lovable, loyal beasts trained for the world's most excruciating conditions.

By the time a snowstorm sweeps in, causing the base commander to demand the pair's immediate return, the eight sled dogs have already saved the day, but something more incredible happens and, this being Antarctica, it happens quickly—like a cracking, cascading disaster.

The humans must abandon the region, and, painfully, the domesticated dogs. As the plane lifts into the blinding, raging sky, it's clear that Walker's heart is aching as hard as his frostbite, and Eight Below becomes its title and vacates the danger premise for a jaw-dropping journey of amazing dogs trying to survive without their master.

The picture slows while Walker tries to heal, recover and decide how to deal with what's been done, and outdoorsman director Frank Marshall (Alive, Congo) is better with menacing sea creatures, penguins and snow dogs than with his human cast's civilian movements.

Days, weeks, months and more months pass while the diverse individual dogs known as old Jack, maternal Maya, Shorty, Dewey and Truman, Shadow and an impetuous puppy with electric blue eyes known as Max fight for life—their own and one another's—and the animal training can only be described as awesome.

Eight Below doesn't let its canines mug for the camera, which is probably why the furry personalities on four paws reduce the entire audience to tears and sniffles in their unforgettable story. For anyone who's ever loved—and lost or left—a dog, Eight Below is the season's most exciting and engaging movie.

Eight Below's single-disc DVD is good, not great. Two audio commentaries, both with director Frank Marshall—paired on one with producer Patrick Crowley and briefly on another with lead actor Paul Walker and, separately, photographer Don Burgess—are pleasantly substantial, but an excellent making-of feature ends abruptly, clocking in at ten minutes. This work of art deserves better, if only to give the dogs and those who worked like dogs on this ambitious adventure their due. Several deleted scenes, with optional commentary, are well done.

The movie is the main thing and the epic premieres on DVD with forethought, notably a large-print-and-icon scene selection function that makes it measurably easier for kids and those with less than perfect vision. Whether navigating the brave ice water rescue, the roaring leopard seal attack or the Norwegian icebreaking ship in action, Mr. Marshall's remarkably triumphant Eight Below is a tribute to the unbreakable bond between man and dog and to the heroism in both.