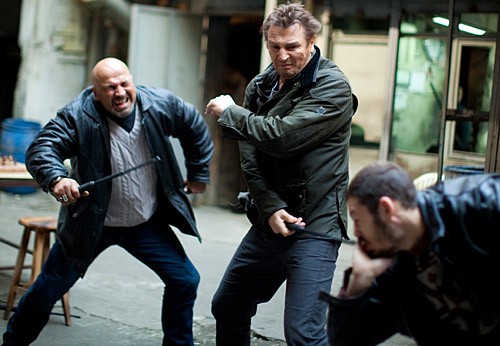 The Top 12 earned $120.7 million this weekend, which is up an incredible 57 percent from the same frame last year. So far this month, box office is up at least 37 percent year-over-year, and up 22 percent over 2009's record pace. With Paranormal Activity 4 coming up, October 2012 is all-but-assured to set a new monthly record.

Taken 2 fell 56 percent to $21.9 million in its second outing. That fall is obviously much steeper than that of the original Taken (only 17 percent), though it's about on par with the second Bourne movie (off 54 percent). Taken 2 has already earned $86.1 million, which is $33 million ahead of the first movie through the same point.

In second place, Argo debuted to $19.5 million from 3,232 locations. That's lower than director/star Ben Affleck's The Town ($23.8 million), but that movie's bank robbers in Boston story was much more broadly appealing than Argo's Iranian hostage crisis set-up. Argo did wind up out-grossing other Middle East thrillers like The Kingdom ($17.1 million), Green Zone ($14.3 million) and Body of Lies ($12.9 million), which is likely due to Affleck's burgeoning fanbase and Warner Bros.'s solid marketing effort.

Exit polling indicated that the audience was 54 percent women, and skewed much older (74 percent over the age of 35). The movie received a rare "A+" CinemaScore. With an older audience, great word-of-mouth, and a healthy dose of Oscar buzz, Argo will play well over the next month or two and should wind up with at least $80 million.

Sinister opened to $18 million at 2,527 locations. It didn't come close to director Scott Derrickson's The Exorcism of Emily Rose ($30.05 million), but it was still up on The Possession ($17.7 million), The Ring ($15 million) and Insidious ($13.3 million). That's also the seventh-highest opening ever for Summit Entertainment behind all four Twilight movies, Red and Knowing.

Sinister's audience was 54 percent male and 53 percent under the age of 25. It garnered a "C+" CinemaScore, which is fairly standard for horror movies but still doesn't bode well for long-term prospects. Add in the direct, overwhelming competition from Paranormal Activity 4 next weekend and it's likely that Sinister will fall like a rock in the coming weeks.

Hotel Transylvania had another strong weekend, easing just 36 percent to $17.2 million. The animated hit passed $100 million on Sunday, and has so far earned $102.1 million total. It now appears to be on pace to pass The Smurfs ($142.6 million) to become Sony Pictures Animation's highest-grossing movie ever.

While Sony is having a ton of success with Hotel Transylvania, they have to be a lot less happy with Here Comes the Boom: the Kevin James vehicle opened to just $11.8 million from 3,014 locations this weekend. That's the lowest start ever for a James movie behind Zookeeper ($20.07 million) and The Dilemma ($17.8 million). At least the MMA comedy earned an "A" CinemaScore, which should help it save some face in the coming weeks.

Here Comes the Boom's audience was 55 percent general moviegoers and 45 percent families. Of all audience members over the age of 12, 52 percent were male.

Opening in ninth place with just $4.17 million, Seven Psychopaths was probably the biggest disappointment of the weekend. That figure is the lowest nationwide opening ever for CBS Films below last month's terrible debut for The Words ($4.75 million). It was also lower than nearly all comparable titles, including Shoot 'Em Up ($5.7 million). Of course, Seven Psychopaths was playing in far fewer theaters (1,480, instead of well over 2,000), but that excuse only goes so far: when releasing in a lower theater count, the theaters are disproportionately higher priced locations in denser population centers, and therefore should drive a much better per-theater average.

The audience skewed male (62 percent) and older (71 percent were 25 years and up). The overall CinemaScore was a fine "B+", though that improved to "A-" among males 18 to 34 years old. Seven Psychopaths will ultimately outgross writer-director Martin McDonagh's first movie, In Bruges ($7.8 million), but will struggle to even get to a meager $20 million by the end of its run.

After three successful weeks in limited release, The Perks of Being a Wallflower expanded nationwide in to 726 locations and earned an estimated $2.15 million this weekend. So far, the adaptation of the best-selling novel has grossed $6.14 million, and it's on its way to well over $10 million.

In 11th place, Atlas Shrugged: Part II bombed with just $1.75 million from 1,021 locations. In comparison, the first movie opened to $1.69 million from just 299 theaters. The issue here isn't the source material, as Ayn Rand's novel is one of the best-selling works of 20th century fiction. Instead, blame it on the terrible execution: only the most die-hard fans are going to show up for what appears to be a cheap interpretation of the beloved novel.